Hugh Dingle is a worldwide authority on animal migration. (Photo by Kathy Keatley Garvey)
DAVIS--Whales and monarch butterflies aren't the only animals that migrate to overwintering sites, although they get the most human attention.

“Equally apparent are the migrations of insects like armyworm moths and locusts that have severe negative impacts on agricultural systems,” says Hugh Dingle, an emeritus professor of entomology at the University of California, Davis, and a worldwide authority on animal migration.

“What is not so appreciated, however, are the numerous tiny insects, mites, and spiderlings that also migrate.”

“Even to the most casual observer of nature it is apparent that migration is a conspicuous behavior for many organisms,” said Dingle,  author of the newly published second edition of Migration: The Biology of Life on the Move (Oxford University Press), a sequel to the first edition published in 1996. “The great whales move up and down our coasts and are often viewable from promontories like Pt. Reyes; millions of birds appear in high latitudes to breed in the spring and depart in the fall; and millions of bright orange monarch butterflies inspire awe with their migrations from North America to overwintering sites in Mexico or on the coast of California.”

Winged aphids and ballooning spiders often escape the human eye. ““On summer evenings at temperate latitudes the air to considerable altitudes is often filled with winged aphids and ballooning spiders that with the aid of selected winds can migrate for hundreds or even thousands of kilometers,” he said. “Birds, grasshoppers, and moths are also adept at selecting winds of the right speed and direction, the more impressive because many of these migrations are at high altitude or at night when the ground cannot provide information on direction. Recent studies have shown that information may be derived from the kinetic energy of wind turbulence.” Cover of "Migration"
Why is it important to understand the biological basis of migration and its evolution? “ Because migration is so widespread and because migrants have such impact on both natural and man-altered ecosystems,” he said.

The  book covers a wide taxonomic diversity of organisms from aphids to whales. Included is a discussion of recently developed techniques, such as radar and geolocators, used for tracking migrants. “These methods,” Dingle said, “reveal just how astonishing some migratory journeys can be; godwits and plovers, for example, make nonstop flights over the central Pacific Ocean from Alaska to Australia and New Zealand.”

However, not all migration is a round trip; sometimes it's one-way.  “Important defining behavioral characteristics are specific departure and arrival tactics and the refusal to stop even in favorable habitats until the migration program is complete,” Dingle says. “In the words of National Geographic reporter David Quammen migrants ‘are flat-out just gonna get there.'

“The program or syndrome includes specific modifications of metabolic physiology like enhanced fat storage to fuel migration and of sensory systems to detect inputs from the sun, stars, and magnetic field lines to determine compass direction. Intimately involved in the latter are daily and yearly biological clocks. The pathway followed is an outcome of the syndrome of migratory behavior and is part of the ecology that provides the natural selection acting to determine the evolution of migration.” This image of a monarch butterfly, Danaus plexippus, foraging on a Mexican sunflower, Tithonia, appears on the back cover of "Migration: Biology of Life on the Move." (Photo by Kathy Keatley Garvey)
This interaction between behavior and outcome is a unique aspect of this book. Another important focus: he covers the relation between migration and life histories, including the evolutionary genetics of the relationship. Long-distance round-trips, for example, require long lifespans, hence most insects, although not all, migrate only one-way.

“Natural selection acts differently on long versus short lives. With long lives there are usually many opportunities to produce offspring; with short lives there may be only one,” Dingle said. “Thus reproductive opportunities may determine when and where to migrate. Migrating aphids postpone reproduction until they colonize new host plants; birds reproduce following migration in the spring, but not in the fall. Some birds and insects use migration to exploit ‘rich patches' and breed in different places in different years or even in the same year.

There are also insects that alternate between winged generations for migration and colonization and wingless generations devoted exclusively to high reproductive effort once colonization is accomplished. Genes influence not only migratory effort but also the relation between behavior, reproduction, and morphological traits such as wing length (longer narrower wings in migrants). Author Hugh Dingle describes this as "the parthenogenic (summer) long-winged and wingless morphs of the rose aphid (Macrosiphum rosae)." (Photo by Kathy Keatley Garvey)
Dingle said the full understanding of migration, or “life on the move,” involves genetics, physiology, and morphology, as well as behavior and ecology.

“'They are flat-out just gonna get there,' as David Quammen said.”

National Geographic featured Dingle in its cover story on “Great Migrations”  in November 2010.  LiveScience interviewed him for its November 2010 piece on“Why Do Animals Migrate?”

Dingle, a fellow of the American Association for the Advancement of Science and the Animal Behavior Society, has done research throughout the world, including the UK, Kenya, Thailand, Panama, Germany and  Australia.

Dingle is a former secretary of the International Society for Behavioral Ecology and past president of the Animal Behavior Society. 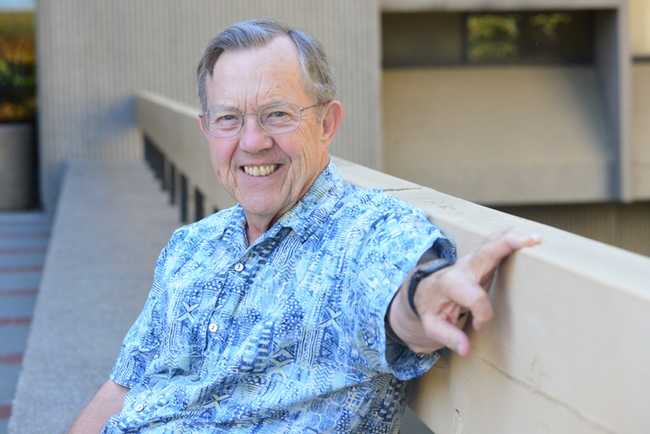