Entomology & Nematology News
sitenum=270
UC News about Entomology and Nematology.
The Dirty Side of Soap: Long-Term Exposure to Triclosan May Potentially Have Serious Health Consequences
Published on: November 17, 2014 Long-term exposure to triclosan, an antimicrobial commonly found in soaps, shampoos, toothpastes and many other household items, may potentially have serious health consequences, according to  a team of University of California researchers, including  Bruce Hammock, distinguished professor, UC Davis Department of Entomology and Nematology.

Their research, published Nov. 17 in the Proceedings of the National Academy of Sciences,  shows that triclosan causes liver fibrosis and cancer in laboratory mice through molecular mechanisms that are also relevant in humans.

“Triclosan's increasing detection in environmental samples and its increasingly broad use in consumer products may overcome its moderate benefit and present a very real risk of liver toxicity for people, as it does in mice, particularly when combined with other compounds with similar action,” said Robert H. Tukey, professor in the departments of Chemistry & Biochemistry and Pharmacology, UC San Diego School of Medicine

Tukey led the study with Hammock, who holds a joint appointment with the UC Davis Comprehensive Cancer Research Center.  They direct the National Institute of Environmental Health Sciences (NIEHS) Superfund Programs at their respective campuses.

The team, including Mei-Fei Yueh,  found that triclosan disrupted liver integrity and compromised liver function in mouse models. Mice exposed to triclosan for six months--roughly equivalent to 18 human years--were more susceptible to chemical-induced liver tumors. Their tumors were also larger and more frequent than in mice not exposed to triclosan.

The study suggests triclosan may do its damage by interfering with the constitutive androstane receptor, a protein responsible for detoxifying (clearing away) foreign chemicals in the body. To compensate for this stress, liver cells proliferate and turn fibrotic over time. Repeated triclosan exposure and continued liver fibrosis eventually promote tumor formation.

Triclosan is perhaps the most ubiquitous consumer antibacterial. Studies have found traces in 97 percent of breast milk samples from lactating women and in the urine of nearly 75 percent of people tested. Triclosan is also common in the environment: It is one of the seven most frequently detected compounds in streams across the United States.

“We could reduce most human and environmental exposures by eliminating uses of triclosan that are high volume, but of low benefit, such as inclusion in liquid hand soaps,” Hammock said. “Yet we could also for now retain uses shown to have health value — as in toothpaste, where the amount used is small.”

Triclosan is already under scrutiny by the FDA, due to its widespread use and recent reports that it can disrupt hormones and impair muscle contraction.

(Editor's Note: Hammock was featured in the Sept. 4 edition of Newsweek in a piece titled "Is Cancer Lurking in Your Toothpaste? (And Your Soap? And Your Lipstick? Hammock called triclosan “quite a good antimicrobial” that belongs in the hospital, not on the kitchen counter, wrote reporter Alexander Nazaryan, who quoted Hammock as saying: “There's no reason for it to be there" (in hand and dish soaps). 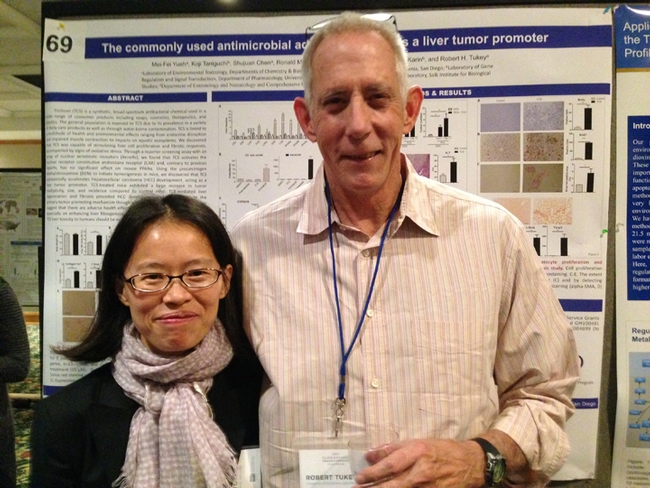