Last summer we spent many hours capturing images of male long-horned bees, Melissodes aegils, sleeping in clusters on the stems of our guara at night and early morning. (Sometimes they slept inches away from a praying mantis.) Then during the day the boys chased the girls, all the while protecting their turf from prospective suitors and pollinators.

We captured our last seasonal image of a long-horned bee on Sept. 28. It was a Melissodes, all right, but it was Melissodes robustior, a male, as identified by native pollinator specialist Robbin Thorp, emeritus professor of entomology at UC Davis and one of the authors of California Bees and Blooms.

The book, the work of Gordon Frankie, Thorp, Rollin Coville, and Barbara Ertter, all affiliated with UC Berkeley (Thorp received his doctorate there), is a wealth of information about not only bees, but the flowers they visit. (See the UC Davis Department of Entomology and Nematology website.)

Want to know about Melissodes? There are 130 species of Melissodes in the New World, and about 100 of them live in North America. Of that number, 50 species live in California. Who knew? And only three Melissodes species are widespread and common in California, including our robust buddy, Melissodes robustior.

Last summer we watched at least two species of Melissodes attempt to claim all the guara, catmint, oregano, rosemary, Mexican sunflower (Tithonia), Cosmos, and African blue basil, much to the "bee-wilderment" of honey bees, bumble bees, carpenter bees and other pollinators.

The long-horned bees are all gone now, but next year a whole new generation will take their place. 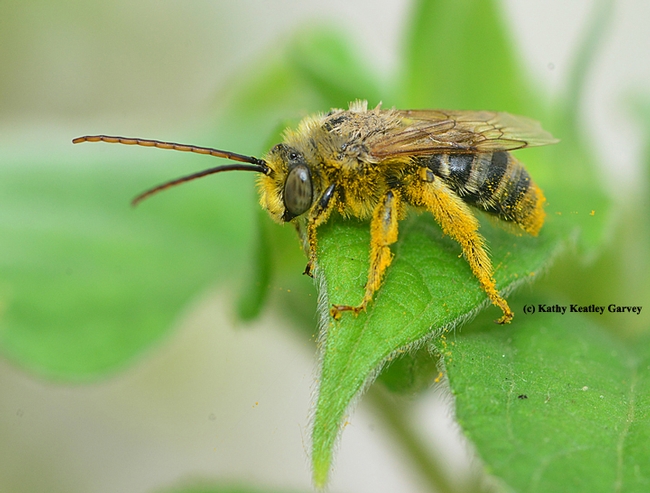