Talk about a tiger by the tail.

That would be the Western Tiger Swallowtail (Papilio rutulus).

It's returned to the Davis area after a 15-year hiatus.

Butterfly expert Arthur Shapiro, professor of evolution and ecology at the University of California, Davis, says the Western Tiger, one of the largest and showiest of butterflies, “was relatively common in Davis until the early 1990s, when it suddenly disappeared.”

"Since then there have been no sightings at all--or at most one or two per year--until this year. Now it looks like it's back as if nothing had happened!"

Since March 26, Shapiro has tallied about 100 sightings in the Davis/Vacaville area. "It's still flying today," he says.

The butterfly, with a wingspan of three to four inches, has bright yellow wings edged with a black border.  Four diagonal stripes grace the top of the wings, and blue and orange spots on the hind wings, near its tail.  Its normal range covers much of western North America, from British Columbia to North Dakota in the north to Baja California and New Mexico in the south. It nectars from many flowers including thistles, abelia, California buckeye, zinnia, and yerba santa.

Florian Altermatt, a visitor from Switzerland, spotted the first Western Tiger March 26 near the Memorial Union, UC Davis campus. He had no idea the species had "disappeared.”

Shapiro saw the next one on April 12. Between then and June 4, six more sightings occurred: on campus, in central Davis, and in both east and west Davis.

“The second generation was first spotted on campus on June 24 and in the next five days there were eight more sightings--on campus and in central Davis,” Shapiro said. “There's no doubt the Western Tiger is breeding here again. The mystery is why it ever went away."

Naturalist/photographer Greg Kareofelas has seen the Western Tiger in  Davis “consistently” since the last week in June. “It’s an incredible phenomenon,” he said. “I have lived in Davis since 1972 and this is the most I have ever seen. In the last 18 years of ‘Davis record keeping,’ I’ve been averaging about one Davis sighting a year. This year, I have been seeing about one a day for the last seven weeks. My data is only for my yard in east Davis. So this year is unparalleled.”

And Vacaville? "They are just as common in Vacaville as they are here in Davis this year,” he said. “In Vacaville, they never went away.”

“I set a site-specific day record for me with 22 at Gates Canyon (Vacaville) on July 7, and another with eight in the Suisun Marsh on Aug.  9,” Shapiro said.

Lynn Kimsey, director of the Bohart Museum of Entomology, and professor and vice chair of the UC Davis Department of Entomology, said the Bohart Museum “has a large collection of these butterflies, in part due to the efforts of Art Shapiro and his students. The collection is important because it archives where the swallowtails have been found in the past, and changes in their distribution over time.”

Shapiro, author of the 359-page Field Guide to Butterflies of the San Francisco Bay and Sacramento Valley Regions, maintains a Web site covering more than three decades of collected data.

So, if you see the Western Tiger in the Davis area, e-mail Shapiro at amshapiro@ucdavis.edu.

He's glad "the tiger" is back. 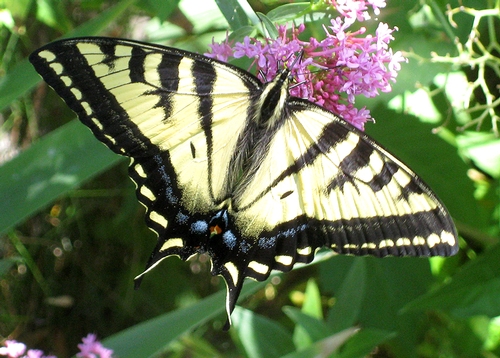 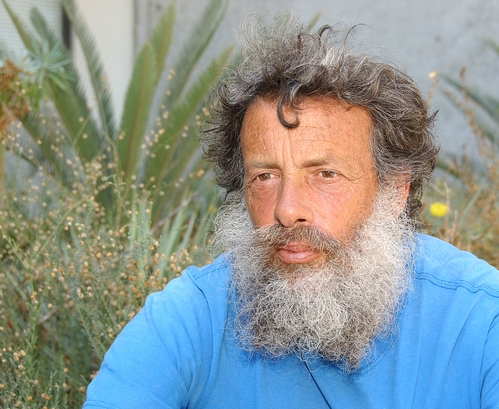 Arthur Shapiro
BUTTERFLY EXPERT Arthur Shapiro hadn't seen the Western Tiger Swallowtail in the Davis area for 15 years. This year there's been some 100 sightings. "Now it looks like it's back as if nothing had happened!" he said. (Photo by Kathy Keatley Garvey)
Tags: Art Shapiro (223), Papilio rutulus (26), UC Davis (210), western tiger swallowtail (35)
Comments: 0
No Comments Posted.
Leave a Reply: