Boudinot, who recently won a first-place President's Award for his presentation on “Revising Our Vision of Ant Biodiversity: Male Ants of the New World” at the 2014 Entomological Society of America meeting in Portland, Ore., is passionate about ants, particularly male ants.

Male ants get little respect or attention, said Boudinot, who aims to raise public awareness of their importance and demystify them through his scientific research.

“There are about 12,800 living species of ants described to date,” explained Boudinot, who enrolled in the UC Davis doctoral program after receiving his bachelor's degree at Evergreen State College, Olympia, Wash., in 2012. “Males are known for only 27 percent of these species, and no identification resource exists for identifying male ants for most bioregions.”

Addressing this concern, he provided the first male-based identification keys to subfamily and genus level for the New World. The keys cover 13 of the 16 subfamilies and 151 of the 324 genera. This, coupled with a global male-based key to all 16 ant subfamilies he submitted in November, will enable male ants to be identified by genus in the New World---encompassing North, Central, and South America---for the first time.

“This will facilitate the use of male ants in evolutionary, ecological, and taxonomic studies,” Boudinot said. “Moreover, it encourages a shift in the focus of myrmecology, the study of ants, by allowing male-specific collecting methods to be used and will encourage future workers to include males in their research.” These are all males of the subfamily Leptanillinaea. This plate appears in Brendon Boudinot's manuscript, "Contributions to the Knowledge of Formicidae (Hymenoptera, Aculeata, Formicidae): A New Diagnosis of the Family, the First Global Male-Based Key to Subfamilies, and a Treatment of Early Branching Lineages" which he submitted to the European Journal of Taxonomy in November.
Boudinot's first research publication, “The Male Genitalia of Ants: Musculature, Homology, and Functional Morphology (Hymenoptera: Aculeata: Formicidae),” conducted as an undergraduate, appeared in the January 2013 volume of The Journal of Hymenoptera Research). Subsequently, he guest-blogged about the research for Alex Wild's Myrmecos column. Wild, now with the University of Texas, holds a doctorate in entomology from UC Davis and is an alumnus of the Phil Ward lab.

As for telling the difference between a male and a female ant, that's not easy, even for many ant researchers, Boudinot acknowledged. “Males and reproductive females, queens, usually have wings and look different from workers. Males are usually differentiated from females by having slightly different morphology. Besides having complex and strange genitalia, male ants also tend to have one more antennal segment, larger eyes, and in general look more ‘waspy.' "

The genitalia of male ants are fascinating, he said. “Think of a Leatherman or Swiss Army knife which has paired muscular claspers, graspers, and sawblades. Male ants have evolved winglessness and worker-like morphology at least five times in the ants, which has historically led to the accidental description of these wingless males as new species. This is a weird phenomenon which I will be focusing on for a chapter of my dissertation. Why have they evolved winglessness? What are the evolutionary patterns of skeletomuscular reduction? Are there trade-offs for a colony when they lose the ability to produce dispersing males? Anyway, this should be fun.”

Boudinot noted that the inaccurate portrayals of ants in Hollywood movies lead to lifelong misinterpretations. “There is a perception that there are two kinds of ants: red ants and black ants--and sometimes yellow ants--and that the workers of ants include both sexes, as in the Disney movies A Bug's Life and Antz,” Boudinot said. “Really, ants are incredibly diverse---which is why I am fascinated with them in part.”

Reproductory misinformation abounds in “A Bug's Life,” the 1998 American computer-animated comedy adventure film, Boudinot said. All worker ants are female and sterile, but Princess Atta marries a male, Flik. “Flik and Princess Atta wouldn't have married, and if they did, Flik wouldn't be the dad as chances are she, as a worker, would be able to lay only unfertilized eggs which would become clonal males.”

If there's one thing that Boudinot wants youngsters of today to know about ants, it's this: “There are remarkable things to discover everywhere, and unanswered questions abound. Discovery is borne out of observation, and there is so much to observe in any single square meter of Earth's surface. I like ants in this respect because they are everywhere! In tropical rainforests ants and termites (another group of social insects) may make up to one-third of the total animal biomass, dwarfing that of vertebrates such as panthers, birds, and amphibians. There are about 90 species of ants in Sonoma, Napa, Yolo, and Sacramento counties alone, including fungus-cultivating ants!”

Boudinot encourages people to check out AntWeb.org. “This website is a digital database of thousands and thousands of species of ants, many of which look like they are extraterrestrials or are strange beasts out of nightmares,” he said, adding “Okay, and some of which are just fluffy and adorable.” 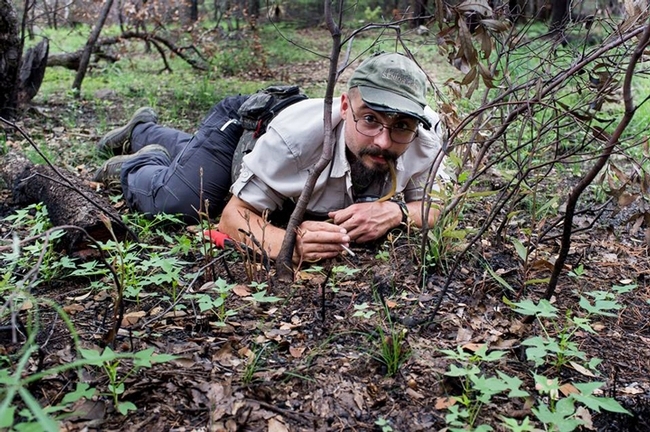