Bug Squad
sitenum=63
Happenings in the insect world
Making a Meal Out of a Male: Prayers Answered!

Male praying mantids looking for "a little love" don't always fare well. Sometimes they lose their head. Female mantids can--and do--cannibalize them before, during or after copulation.

Now mantid researcher Katherine Barry of Macquarie University, Sydney, Australia, says that some hungry female mantids are deceptive liars. They emit chemical cues, or pheromones, as if seeking a mate, but what they want is not a mate, but a meal.   Her research, "Sexual Deception in a Cannibalistic Mating System? Testing the Femme Fatale Hypothesis," appears in the Dec. 17 edition of the Proceedings of the Royal Society B.

The starving females in her study produced the same chemical cues that the well-fed females did. The deception clearly worked. “The consumption of one male improves body condition by approximately 33 percent and fecundity by approximately 40 percent," Barry pointed out.

In her abstract, Barry wrote: "The Femme Fatale hypothesis suggests that female mantids may be selected to exploit conspecific males as prey if they benefit nutritionally from cannibalism. Such a benefit exists in the false garden mantid Pseudomantis albofimbriata—females use the resources gained from male consumption to significantly increase their body condition and reproductive output. This study aimed to examine the potential for chemical deception among the subset of females most likely to benefit from cannibalism (poorly fed females). Females were placed into one of four feeding treatments (‘Very Poor', ‘Poor', ‘Medium' and ‘Good'), and males were given the opportunity to choose between visually obscured females in each of the treatments. Female body condition and fecundity varied linearly with food quantity; however, female attractiveness did not. That is, Very Poor females attracted significantly more males than any of the other female treatments, even though these females were in significantly poorer condition, less fecund (in this study) and more likely to cannibalise (in a previous study). In addition, there was a positive correlation between fecundity and attractiveness if Very Poor females were removed from the analysis, suggesting an inherently honest signalling system with a subset of dishonest individuals. This is the first empirical study to provide evidence of sexual deception via chemical cues, and the first to provide support for the Femme Fatale hypothesis."

We've seen scores of praying mantids lurking, snagging prey, and devouring their prey, but we've never seen any engaging in sexual cannibalism, which occurs when a female cannibilizes the male before, during or after copulation.

Professor Jay Rosenheim of the Department of Entomology and Nematology, University of California, Davis, has.

In fact, he captured an amazing photo of it and posted it on his website. His daughter, Leah, found the pair in their garden. "Note that the larger female has consumed the head of the smaller male (an example of the famous sexual cannibalism that can occur in this species," Rosenheim wrote. "Amazingly, the decapitated male continued to cling to the female and even attempt to re-initiate copulation several times."

With his permission, we're posting his photo below. We're adding two photos typically seen: a praying mantis waiting for prey--or a mate?--in a bed of cosmos, and another of a gravid praying mantis climbing a bamboo stake.

We don't know if a male lost its head during the male-female encounter, but we do know that we have an ootheca or egg case on our back porch. 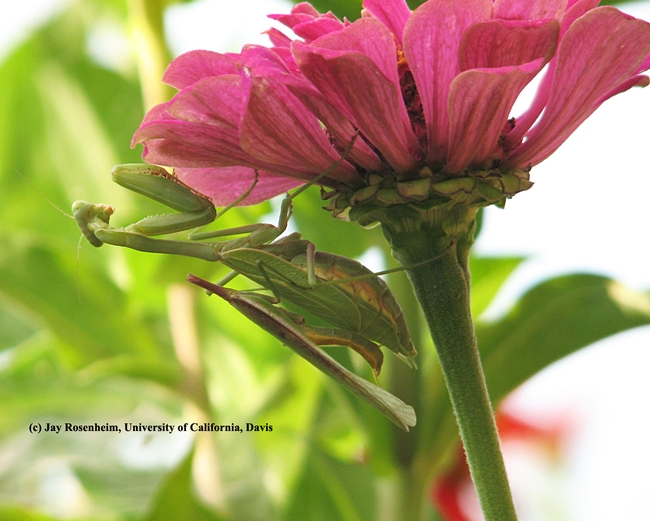 This photo by Professor Jay Rosenheim of UC Davis shows sexual cannibalism. The female (larger one) has just chomped off the head of the male, during sexual reproduction. 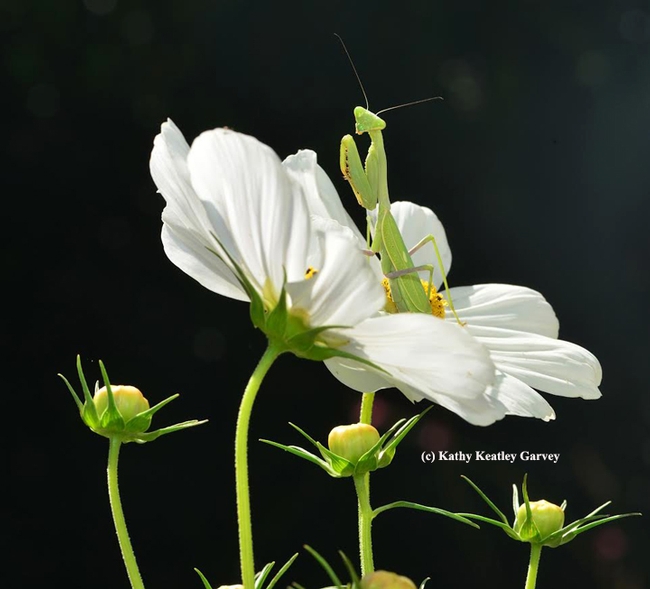 A praying mantis perched on a cosmos waiting for prey--or maybe a mate? (Photo by Kathy Keatley Garvey) 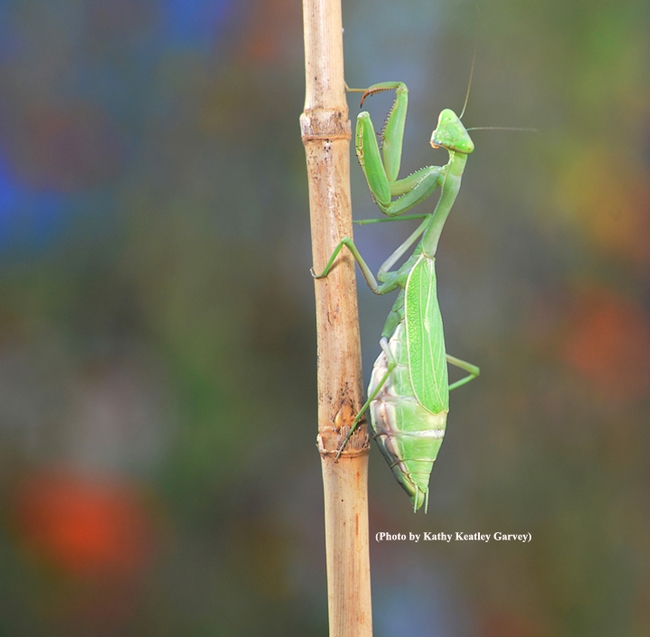