Robbin Thorp looks at a vial containing a bumble bee. (Photo by Kathy Keatley Garvey)
World-renowned native pollinator specialist Robbin Thorp, UC Davis emeritus professor of entomology, is the recipient of the 2015 UC Davis Distinguished Emeritus Award for his outstanding scholarly work and service accomplished since his retirement in 1994.

He will be honored in February at a chancellor's luncheon where he will receive a plaque and a cash award.

“Professor Thorp has had an outstanding professional career in the area of pollination ecology and systematics of honey and bumble bees,” said Lyn Lofland, president of the Executive Committee of the UC Davis Emeriti Association. “He has continued his professional contributions since he retired publishing both scientific papers and books. He has continued to teach and guide graduate students providing them with the benefit of his vast experience and knowledge. He also provides expert taxonomic services, identifying thousands of native bee specimens. He has coupled this effort with training numerous field assistants. Professor Thorp matched perfectly with the criteria established for the Distinguished Emeriti Award."

Thorp said it's a great honor to be named a distinguished emeritus.  "It is an extra pleasure to be recognized for doing what I love and enjoy." Robbin Thorp at Algodones Dunes. (Photo by Fran Keller)
Since his retirement, he has compiled an exemplary record for his research, teaching, publications, presentations, and advisement services, sharing his expertise with local, statewide, national and international audiences. In his retirement, he has published 68 papers and is the first author on 15 publications. He received several prestigious awards: the 2013 outstanding team award, with several colleagues, from the Pacific Branch of the Entomological Society of America, and the 2010-2011 Edward A. Dickson Emeriti Professorship, UC Davis. Thorp is the North American regional co-chair for the International Union for Conservation of Nature (IUCN) Bumblebee Specialist group.   He is a member of 10 professional societies, including the International Society of Hymenopterists.

Thorp maintains his office and research headquarters in the Harry H. Laidlaw Jr. Honey Bee Research Facility on the UC Davis campus. Among his latest publications: he co-authored two books published in 2014:  Bumble Bees of North America: An Identification Guide (Princeton University Press) and California Bees and Blooms: A Guide for Gardeners and Naturalists (Heyday). Of the 20,000 bee species identified worldwide, some 4000 are found in the United States, and 1600 in California.

Thorp chaired the Jepson Prairie Advisory Committee at UC Davis from 1992-2011 (which includes seven years after his retirement).  He is still active as a docent leading tours during the tour season.  He is also involved in training new docents by providing information on the native bees that pollinate vernal pool flowers.

Thorp is an integral part of The Bee Course, an annual 10-day workshop sponsored by the American Museum of Natural History and held at the Southwestern Field Station near Portal, Ariz. He has taught there since 2002 (the instructors are all volunteers), and even though he is 81 years young, he plans to continue teaching there.

In an email conversation, colleague James Cane of the USDA-ARS Pollinating Insect Research Unit, Utah State University, Logan, said that “Dr. Robbin Thorp should be the first scientist to be cloned, so valuable and broadly integrated are his knowledge about bees and pollination.  No one else I know has his combination of skills; normally several people would be needed.  Thus, he is a taxonomist of several genera of bees, a competent pollination biologist studying both native bees and honey bees in both natural and agricultural realms (with research experience in several crops), and a conservation advocate for bees.  Moreover, I have watched his considerable teaching skills while helping in The Bee Course over the years.  There I also get to see what a model human being Robbin is: thoughtful, considerate, a great listener, playful, polite unpretentious, all traits that the students gravitate toward.  I have looked to Robbin as a role model for over 30 years, listen carefully to what he has to say, and always look forward to being in his presence.  UC Davis is very lucky indeed to have attracted and retained such a fabulous faculty member.” This Western bumble bee, Bombus occidentalis, has declined throughout central California. (Photo by Kathy Keatley Garvey)
Said Lawrence Packer, a co-instructor: “The students benefit considerably from Dr. Thorp's enormous understanding of some of the most difficult to identify bee groups as well as his encyclopedic understanding of bee biology.” The course attracts hundreds of ecologists and taxonomists throughout the world. They are grateful for his expertise, his generosity and his kindness.”

Colleague Claire Kremen of UC Berkeley credits Thorp with not only identifying more than 100,000 bees for her research since his retirement in 1994, but helping her with research protocol and helping her graduate students identify bees. “Dr. Thorp has contributed in three main ways. First, he has provided expert input into the design of protocols for the research, including assays for pollinator effectiveness, developing citizen science methods, rearing experimental bumble bee colonies, monitoring bumble bee colony properties in the field, and developing pollinator survey methods. Second, he has provided expert taxonomic services, including personally identifying over 100,000 native bee specimens that we have collected during this work, and working with us to develop a bee traits database. Third, he has trained numerous field assistants and graduate students from my lab in different aspects of bee biology. He's spent long hours with many of my graduate students helping them learn to identify bees. He also helped us develop methods and information sheets for teaching field and lab teams to recognize key generic and family characters for identifying bees in the field and sorting them in the lab. He's advised many of my graduate students on different aspects of their work.”

Said Lynn Kimsey, director of the Bohart Museum of Entomology and professor of entomology at UC Davis: “I have to say that Robbin has been phenomenal. He is more active in research and outreach every year. Regardless of what task is presented to him he is engaged and brings all his experience and knowledge to bear. I don't know many line faculty who are as active in their fields as Robbin is as a retiree. He is always available for museum events and loves to work with the public, particularly kids. I don't know of many pollination ecologists or bee systematists with his level of knowledge.”

Entomologist Katharina Ullmann, who received her doctorate in entomology in 2014 from UC Davis, says that Robbin Thorp is “one of the few people in North America who can identify bees down to the species level. As a result he's in high demand and has identified thousands of specimens for numerous lab groups since his retirement. However, he doesn't just identify the specimens. Instead, he's willing to patiently work through dichotomous keys with you so that you can learn those skills. His ongoing monitoring projects, work as an IUCN specialist, and recent books on bumble bee identification and guide to the bees of California show his commitment to the broader impacts of his research.”

Around the UC Davis campus, Thorp is known as a tireless advocate for pollinator education and outreach. He is often called upon by the Bohart Museum of Entomology and the Häagen-Dazs Honey Bee Garden (both part of the UC Davis Department of Entomology and Nematology), the UC Davis Arboretum and the California Center for Urban Horticulture to participate in their public outreach forums and events.

He spends countless hours connecting people of all ages to the world of insects, especially the pollinators like bumble bees. One of his research projects is monitoring the native bee activity in our department's bee garden, Häagen-Dazs Honey Bee Garden, work that he has done since 2008. In addition, he frequently presents talks at UC Davis and afield, to diverse audiences including UC Master Gardeners, beekeeper groups, and schoolchildren.

Thorp, who calls Michigan his home state, received both his bachelor's degree and master's degree in zoology from the University of Michigan. He received his doctorate in entomology from UC Berkeley in 1964.

Previous recipients of the distinguished award: 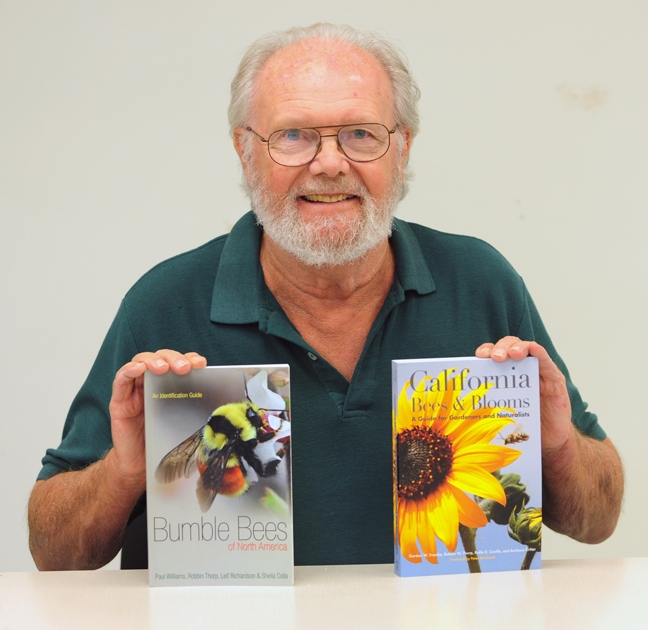 Robbin Thorp with two of the books he co-authored in 2014. (Photo by Kathy Keatley Garvey) 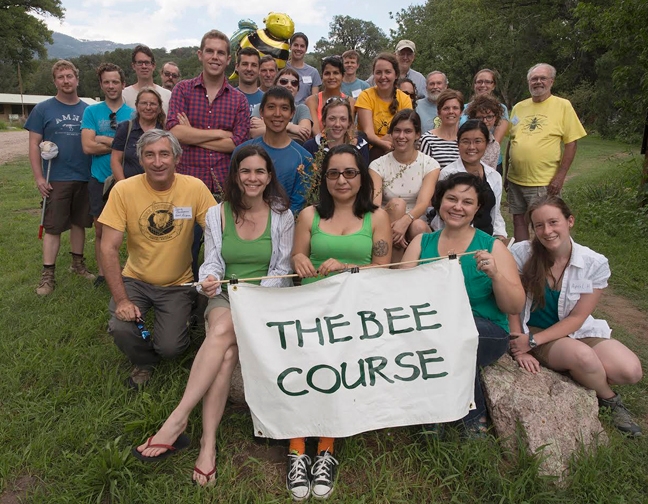 Professor Robbin Thorp with students from The Bee Course. He is in the third row (far right, standing). 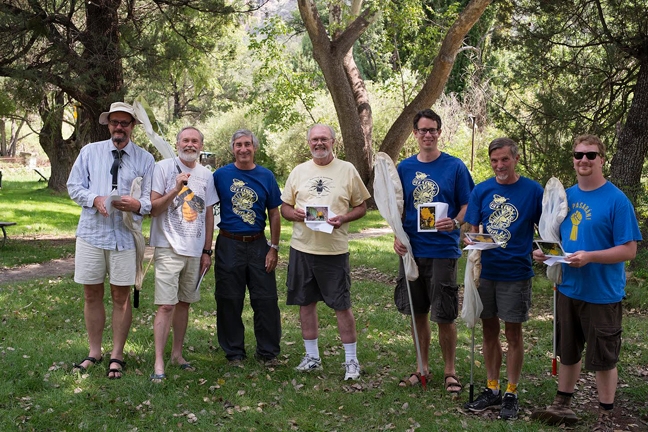 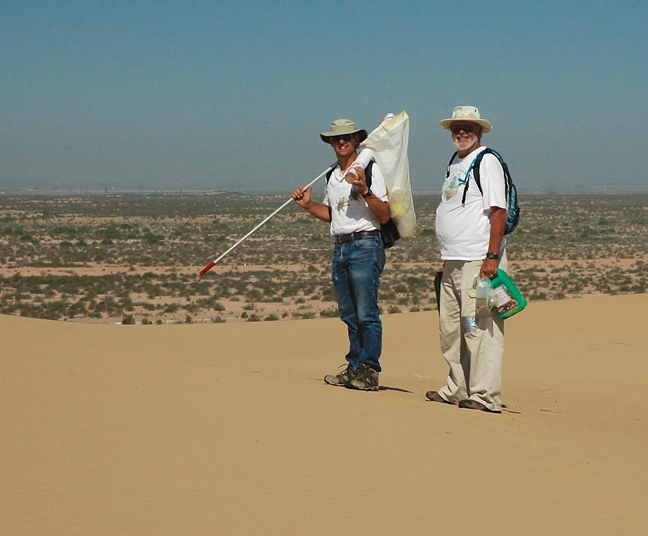 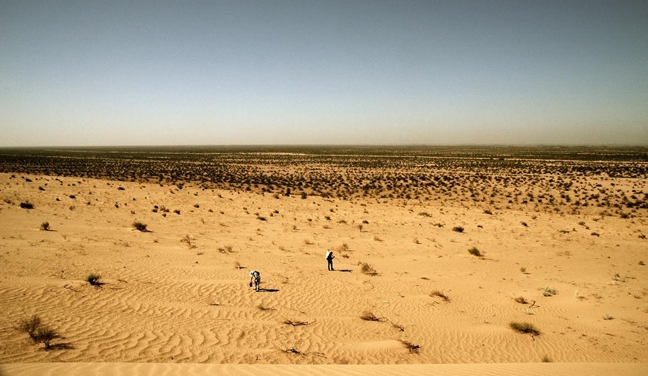