Reporter Lizzie Wade, Science's Latin America correspondent based in Mexico City, led with: "It started with the best of intentions. When evidence emerged that monarch butterflies were losing the milkweed they depend on due to the spread of herbicide-resistant crops in the United States, people across the country took action, planting milkweed in their own gardens. But a new paper shows that well-meaning gardeners might actually be endangering the butterflies' iconic migration to Mexico. That's because people have been planting the wrong species of milkweed, thereby increasing the odds of monarchs becoming infected with a crippling parasite."

Wade pointed out that "tropical milkweed—at least when planted in warm environments like southern Texas and the U.S. Gulf Coast—doesn't die back in the winter like native milkweed does. When presented with a place to lay their eggs year-round, many monarchs don't bother making the trip to Mexico at all."  Some think the year-round tropical milkweed is "an even more direct threat to the butterflies. Milkweed hosts a protozoan parasite called Ophryocystis elektroscirrha (OE). As caterpillars, monarchs ingest the parasite along with their normal milkweed meals, and when they hatch from their chrysalises they are covered in spores."

She quoted a butterfly scientist as saying that infected monarchs are much weaker than their healthy counterparts and don't live nearly as long. And if an OE-infected monarch tries to migrate, it will probably die long before it arrives in central Mexico, she wrote.

Shapiro has been monitoring and studying populations of butterflies in central California for more than four decades and posts the information on his website. In an email response to inquiries from a UC Master Gardener and Farm Advisor (initially sent my way), wrote:  “The story is basically correct, but there has to be more to it. Monarchs are normally in 'reproductive diapause' in winter, which means their sex organs and sex drive are inactive; this condition (as in migratory birds) is believed to be induced by seasonal day-length changes. We never used to get attempted winter breeding. Tropical milkweed has been in gardens in California for decades, but only very recently are we seeing attempted winter breeding, first in Southern California and now in the Bay Area. Many of us would like to understand why these animals are NOT in diapause! There have been unexplained changes in the seasonal geography of monarch breeding: for example, here in the Sacramento Valley, there is now virtually no spring breeding (as before) but tons of fall breeding (which didn't use to happen; the animals migrating coastwise were generally in reproductive diapause)."

The reference to OE is correct, Shapiro said. "However, there is an easy 'fix' that nobody talks about for some reason: just cut the plants to the ground a few times a year. This will encourage new growth, which will be cleaner, prettier, more nutritious, and uncontaminated with OE. There is nothing inherently 'bad' about winter breeding if it's clean. Infected winter breeding is a population sink. The animals are often too feeble to fly, and may be unable to expand their wings. But perfectly healthy ones are being produced right now in the East Bay on clean plants."

Many of the public comments that people posted about the research, Shapiro said, show a large amount of ignorance.  “Observation: the commonest eastern (Asclepias syriaca complex) and Californian (A. fascicularis) milkweeds are usually almost if not quite non-toxic, which means the monarchs that feed on them will be edible to birds. If you want to breed monarchs as bird food, by all means plant those! But if you want to breed nasty monarchs that will make birds vomit and never try one again, plant one of the more toxic species! There is no good evidence that the females discriminate between high-and low-cardenolide milkweeds, or that larvae do better on one than on the other. There is no garden equivalent of "one size fits all." You want to use species that make sense where you are located! That's what gardening 'zones' are there for...The genus Asclepias extends south to Argentina (the s-most species, A. mellodora, is the major host of the South American Monarch, Danaus erippus) so yes, there are milkweeds in Mexico…. There are so many resources readily available, but people are lazy, don't know how to search properly, or prefer to create their own 'facts' a la Fox News...it gets discouraging. God bless Master Gardeners and Farm Advisers!” 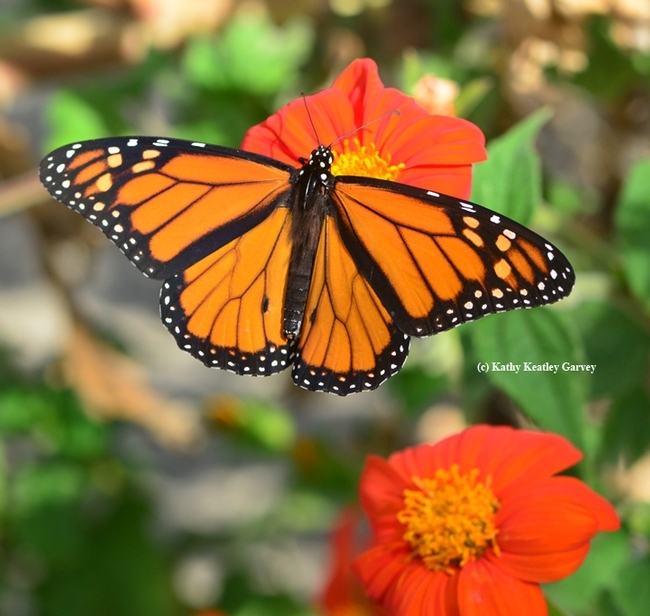 A male monarch nectaring Mexican sunflower (Tithonia). (Photo by Kathy Keatley Garvey)
Tags: Art Shapiro (263), milkweed (47), monarch butterflies (86), Ophryocystis elektroscirrha (2), over-wintering (1), Science (6)
Comments: 6
Comments:
by Diane Johnson
on January 17, 2015 at 7:34 AM
Outstanding article! One more for my ever-expanding file.
by Sarah Dalton
on January 17, 2015 at 11:09 AM
You could even cut them down on a staggered schedule so you always had some in leaf and bloom. I'd suggest maybe every two months or so. Labels or a special layout would help you keep track of what to cut. This doesn't have to be rocket science!
by Brooke
on January 17, 2015 at 1:35 PM
I live in the rouge valley in southern Oregon. Do you know which type of milk weed grows native here? We have quite a bit here on our property. Thanks for your help
by Kathy Keatley Garvey
on January 20, 2015 at 6:33 PM
Brooke,
Thank you for your comment. What to plant in southern Oregon? Same as the ones in this area, Asclepias speciosa and A. fascicularis, according to Professor Shapiro.
by Judy
on February 7, 2015 at 5:43 AM
Thank you for this informative article. I plan on sharing this with our butterfly gardens club members here in The Villages Florida. I cut our milkweed back several times a year - it grows back quickly, is indeed bushier, healthier, thicker and prettier.
by Win Rogers
on March 18, 2015 at 2:10 PM
Hi Kathy, I've got a good crop of Monarch larvae - they appear approx. 7-days old. At Stockton, UCCE San Joaquin. On Tropical milkweed that didn't get cut down.
Leave a Reply: