Entomology & Nematology News
sitenum=270
UC News about Entomology and Nematology.
Zeroing in on the Rice Water Weevil
Published on: February 9, 2015

From Feb. 9, 2015 edition of Entomology Today, Entomological Society of America
A New Resources Against the Rice Water Weevil Mohammad-Amir Aghaee
The rice water weevil, Lissorhoptrus oryzophilus, is the most harmful insect pest of rice in the United States, causing yield losses of up to 25 percent. Adults inflict damage by consuming leaf tissue, and the larvae feed on the roots of rice plants. A native of the southeastern U.S., the rice water weevil invaded Japan in 1976, Korea in 1980, China in 1988, and Italy in 2004.

Luckily, rice growers now have a new resource for controlling it. An open-access article appearing in the Journal of Integrated Pest Management discusses the rice water weevil's life history and invasion biology, as well as management strategies and future directions of research. Larry Godfrey
Authors Mohammad-Amir Aghaee and Larry D. Godfrey, both from the University of California, Davis, tell the story of the weevil since it was first identified as a pest in 1881 by C. V. Riley and L. O. Howard. They then discuss reasons why it has been able to spread so rapidly — up to 36 kilometers per year in some cases — which is partly because of its ability to reproduce asexually.

“This invasive ability is aided by a particular and peculiar aspect of this weevil's biology, the fact that a small percentage of the population in its native range reproduces by parthenogenesis,” they wrote.

The authors also discuss methods of monitoring and sampling — including the use of aquatic barrier traps — as well as management options, including cultural control methods such as draining fields, delayed planting, winter flooding, and nutrient augmentation. They also suggest that insect-resistant transgenic varieties, such as a newly-developed Bt rice plant transformed with the Cry3A gene, might be another management option if approved for cultivation.

Microbial control options using the entomopathogenic fungus Beauveria bassiana and the soil bacterium Bacillus thuringiensis are also discussed, as are other management options which may be available in the future.--Richard Levine

(Editor's Note: Larry Godfrey is an Extension entomologist with the UC Davis Department of Entomology and Nematology and Mohammad-Amir Aghaee is his graduate student.) 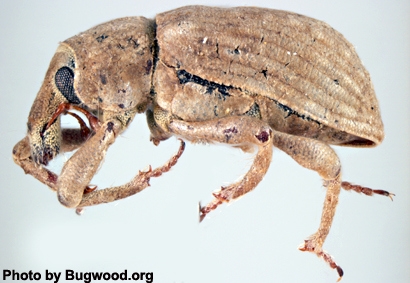