Quick! What do you think of when someone mentions "honey bees and mosquitoes" in the same sentence?

Honey bees are the pollinators, the beneficial insects. Infected mosquitoes transmit killer diseases such as malaria and dengue; they are our most dangerous insect enemies on the planet.

But, in a way, sometimes an apiculturist and a medical entomologist come together when they are honored for their decades of service to the University of California.

Take Extension apiculturist (emeritus) Eric Mussen, a bee guy, and medical entomologist William K. Reisen, a mosquito guy. Both retired last summer--Mussen after 38 years of service to UC, and Reisen, after 35 years of service. Between them, however, their length of service totals 82 years. That's because Reisen earlier served with the U.S. Air Force for three years and with the University of Maryland for six years.

Reisen was nominated for the 2015 meritorious service award by the Contra Costa MVCAC District for "his special and significant contributions to the field of mosquito and vector control."

"Dr. Reisen's career spans over forty years during which he has published over 260 peer-reviewed publications and book chapters in the field of medical entomology," wrote nominator Craig Downs, general manager of the Contra Costa MVCAC District.

"Throughout his career, Bill has directed projects studying the vector competence of mosquitoes for newly introduced viruses, established new surveillance testing paradigms, and initiated complex interactive networks, sharing surveillance data with mosquito control agencies and public health officials to speed mosquito control response times and to minimize disease risk to humans. Several examples of his continual scientific contributions include: the effects of climate variation on arthropod-borne pathogen transmission, modeling efforts for predicting arbovirus risk, the application of insecticides for reducing the disease burden of West Nile virus in California, the use of liquid suspension array technologies for the identification of mosquito blood meals and his keen observation of the role of stagnant swimming pools as breeding sites for Culex spp. vectors in Sacramento County.”

Internationally known for his mosquito research and publications spanning more than four decades, Reisen is now  professor emeritus, Department of Pathology, Microbiology and Immunology (PMI), School of Veterinary Medicine and serves as the editor of the Journal of Medical Entomology. He is a former director of the Center for Vectorborne Diseases (CVEC), comprised of researchers throughout the state and based on the UC Davis campus. Throughout his UC Davis career, Reisen has advised many graduate students affiliated with the UC Davis Department of Entomology and Nematology, PMI or CVEC.  He is currently assisting four doctoral candidates and one master's degree candidate.

Mussen's latest award is an engraved clock from the Almond Board of California. In presenting him with the coveted award, Robert "Bob" Curtis, associate director of Agricultural Affairs, Almond Board of California, told him: "Eric, we honor your service as a Cooperative Extension Apiculture Specialist. Your leadership has been invaluable to both the almond and beekeeping communities as the authoritative and trusted source for guidance on research, technical, and practical problem solving and issues facing both industries.  Even now in your retirement you have been instrumental in the development of Honey Bee Best Management Practices for Almonds and extending this information to all pollination stakeholders."

For 38 years, Mussen served as a university liaison, Scientific Advisory Board member, reviewer of research proposals and a designated speaker for the Almond Board of California. As an emeritus, he continues some of that involvement. In addition to his many duties, for 38 years Mussen wrote and published the bimonthly newsletter, from the UC Apiaries, and Bee Briefs, providing beekeepers with practical information on all aspects of beekeeping. The UC Agriculture and Natural Resources (UC ANR) last year honored him with the Distinguished Service Award for Outstanding Extension.

Mussen, who joined the UC Davis department in 1976, became known throughout the state, nation and world as “the honey bee guru” and “the pulse of the bee industry" and as "the go-to person" when consumers, scientists, researchers, students, and the news media have questions about honey bees. (The new Extension apiculturist is Elina Niño from Pennsylvania State University. Check out her engaging and informative lab website.)

Mussen and Reisen may be far apart in their choice of insects to study, but they are close together in their commitment, dedication and passion that marked their phenomenal careers. 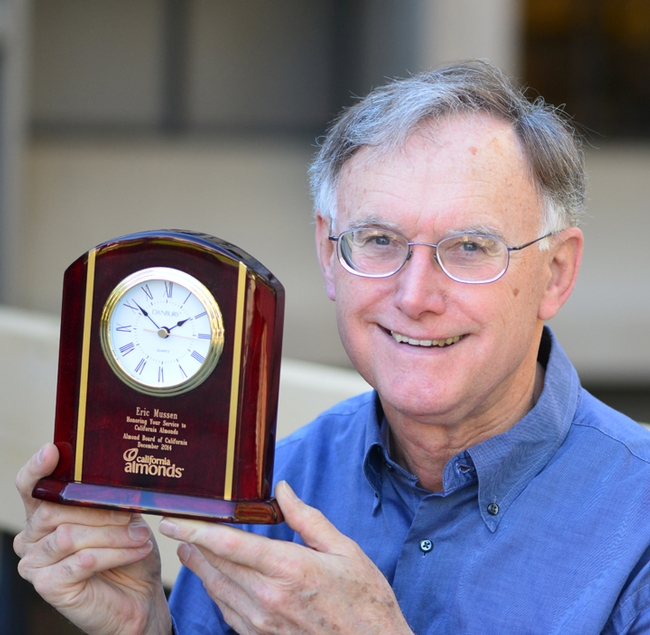 Extension apiculturist (emeritus) Eric Mussen with his engraved clock from the Almond Board of California. (Photo by Kathy Keatley Garvey) 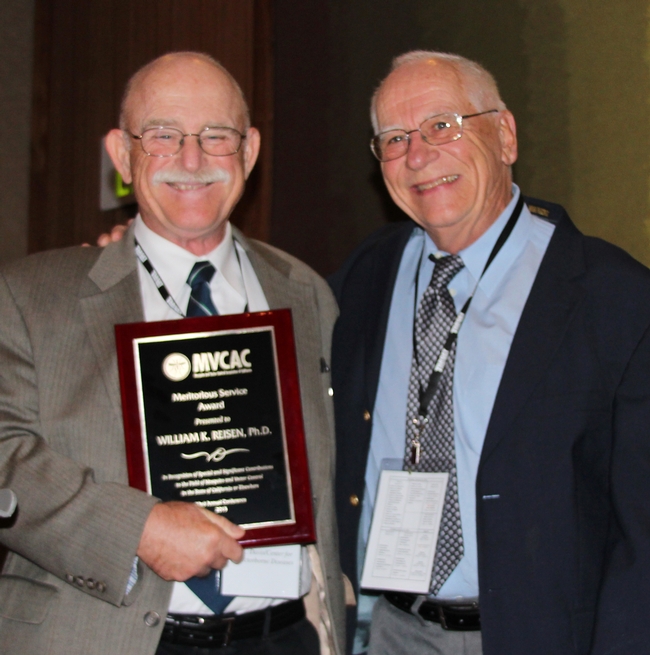