Christian Nansen
DAVIS--Are “mute” cicadas really mute? If so, how do they communicate and attract mates?

A team of scientists, including Christian Nansen, agricultural entomologist at the University of California, Davis, answered those questions in their research, “How Do ‘Mute' Cicadas Produce their Calling Songs?” in the Feb. 25th edition of PLOS ONE, an open access peer-reviewed scientific journal published by the Public Library of Science.

Cicadas in the genus Karenia lack the specialized sound-producing structures that characterize most cicadas, according to Nansen and colleagues Changquing Luo and Cong Wei, both of Northwest A&F University, China.

Although they don't possess the tymbal mechanism, the word “mute,” is misleading, says Nansen, assistant professor in the UC Davis Department of Entomology and Nematology. “They do indeed produce sounds.”

The researchers discovered a new sound-production mechanism in Karenia caelatata, which produces impact sounds by banging the forewing costa against the operculum. It's somewhat like beating a drum while other cicada species with tymbal mechanisms play an orchestra of diverse and loud sounds. A "mute" cicada producing a sound. See link to researchers' YouTube production at end of news story.
“As part of quantifying species' differences in behavior, we used hyperspectral imaging of forewing costae and demonstrated that high-spectral resolution imaging can reveal distinct patterns, such as difference between mute and normal cicadas,” Nansen explained. “So application of such imaging technologies may become a ‘bridge' between in-depth field behavioral research and detailed physiology and histology (structural studies) of insect body parts.”

In their publication, the researchers described the temporal, frequency and amplitude of the sound produced.

“Morphological studies and reflectance-based analyses reveal that the structures involved in sound production of K. caelatata(i.e., forewing, operculum, cruciform elevation, and wing-holding groove on scutellum) are all morphologically modified,” they wrote. “Acoustic playback experiments and behavioral observations suggest that the impact sounds of K. caelatataare used in intraspe­cific communication and function as calling songs.”

“The new sound-production mechanism expands our knowledge on the diversity of acoustic signaling behavior in cicadas and fur­ther underscores the need for more bioacoustic studies on cicadas which lack tymbal mechanism,” they concluded in their abstract.

Cicadas, also known as “tree crickets” (from Latin cicada), are among the most widely recognized of insects due to their large size, usually 2 to 5 centimeters or more, and loud sounds, sometime as high as 120 decibels. Theirs is among the loudest of all insect-produced sounds. Cicadas live in warm climates, from temperate to tropical. Immature cicadas spend most of their lives sucking juice from tree roots. The adults suck plant juices from stems.

The best-known North American genus, Magicicada, has a long life cycle of 13 or 17 years and emerges in great numbers.

Cicadas damage cultivated crops, shrubs, and trees, mainly from females scarring tree branches where they lay their eggs. In many cultures, cicadas are a delicacy on the menu. 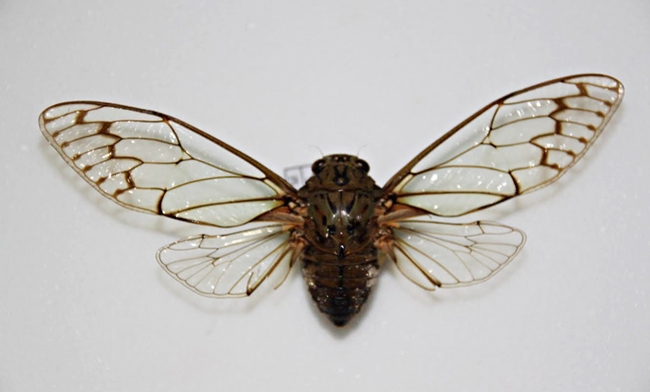