Medical entomologist Thomas W. Scott, distinguished professor of entomology. (Photo by Kathy Keatley Garvey)
DAVIS--Noted medical entomologist Thomas W. Scott, distinguished professor in the Department of Entomology and Nematology at the University of California, Davis and a global authority on dengue and other mosquito-borne diseases, has been named the recipient of the prestigious C. W. Woodworth Award, the highest award given by the Pacific Branch of the Entomological Society of America (PBESA).

Scott will receive the award at PBESA's 99th annual meeting, to be held April 12-15 in Coeur d'Alene, Idaho. He will present a 30-minute talk April 13 on “Embracing Complexity: The Path to Improved Public Health Entomology.” Woodworth's great-grandson, Brian Holden of Monte Sereno, Calif., and a 1981 graduate of UC Davis in electrical engineering, will present the award.

Scott, who has researched mosquito-borne disease for 35 years, is a global authority on the epidemiology of mosquito-borne disease, mosquito ecology, evolution of mosquito-virus interactions, and evaluation of novel products and strategies for mosquito control and disease prevention. Among the top vector biologists in the world, he is recognized as the leading expert in the ecology and epidemiology of dengue, said nominator Michael Parrella, professor and chair of the UC Davis Department of Entomology and Nematology. “Dr. Scott's research is groundbreaking, innovative and visionary,” his nominators said. “He generates detailed, difficult-to-obtain data that are crucial for assessing current recommendations for disease prevention. He rigorously tests fundamental assumptions in public health policy, and develops innovative, cost, and operationally effective strategic concepts to prevent dengue and other important infectious diseases of humans. He has published more than 240 research articles, reviews, and book chapters.” Charles W. Woodworth (Photo courtesy of Wikipedia)
Scott, who plans to retire in June 2015, earned his doctorate in ecology from Pennsylvania State University, served as a post-doctoral fellow in epidemiology at the Yale School of Medicine, and held his first faculty position in the Department of Entomology, University of Maryland. He joined the UC Davis faculty in 1996 and directs the UC Davis Vector-Borne Disease Laboratory.

Scott co-founded the Center for Vector-Borne Research (CVEC), comprised of researchers throughout the UC System; directed the UC Davis Arbovirus Research Unit; and served as vice chair of the UC Davis Entomology Department.

Highly regarded by his peers and associates, Scott is also a fellow of the American Association for the Advancement of Science, and the American Society of Tropical Medicine and Hygiene, as well as ESA. He served as a National Research Council Associate in Bangkok, Thailand; is a past president of the Society for Vector Ecology; and chairs the Mosquito Modeling Group in the program on Research and Policy in Infectious Disease Dynamics (modelers and vector-borne disease specialists who report to the Science and Technology Directorate, Department of Homeland Security, and the Fogarty International Center, National Institutes of Health).

Scott is known for his expertise and enthusiasm in drawing undergraduate and graduate students, postdoctoral associates and researchers to his world-class lab, said project scientist Amy Morrison of the Scott lab's Iquitos Project, Peru. “He has a special ability to push, persuade, and coax me to transform a good idea into a methodological and operational reality, and he has recognized my abilities and value in this regard. He has had an enduring and significant impact on our understanding of dengue and Aedes aegypti ecology.”

In addition to his major accomplishments, “part of Dr. Scott's legacy,” she said, “is bringing together multidisciplinary teams to understand transmission of arboviral diseases and to use that information to shift and shape disease control strategies.”

Scott's world-class research lab received nearly $10 million in grants in 2014 to study dengue. He is the principal investigator of the multi-year grants: $7.5 million from the National Institutes of Health and $2.2 million from Notre Dame University.

Dengue drew international attention in 2013 when Scott and colleagues published research indicating that dengue is three times more prevalent than originally thought--more than triple WHO's estimate of 50 to 100 million. The researchers assembled known records of dengue occurrence worldwide and used a formal modelling framework to map the global distribution of dengue risk. They then paired the resulting risk map with detailed longitudinal information from dengue cohort studies and population surfaces to infer the public health burden of dengue in 2010.

The list of UC Davis-affiliated scientists who have received the C. W. Woodworth Award:

The Woodworth Award, first presented in 1969, recognizes a PBSA member for outstanding accomplishments in entomology. The award memorializes noted entomologist Charles W. Woodworth (1865-1940), who founded the UC Berkeley Department of Entomology and participated in the development of the Agricultural Experiment Station at UC Davis, and as such, he is considered the founder of the UC Davis entomology department. Woodworth made numerous valuable contributions to entomology during his career.  Among his publications, he is especially known for A List of the Insects of California (1903), The Wing Veins of Insects (1906), Guide to California Insects (1913),and "School of Fumigation" (1915). He was the first editor and first contributor to the University of California's publications in entomology.

Advocating the responsible use of pesticides, Woodworth proposed and drafted the first California Insecticide Law in 1906.  He was an authority on the eradication of the codling moth, peach twig-borer, citrus insects, grasshoppers and citrus white fly. Woodworth received both his bachelor's degree (1885) and a master's degree (1886) from the University of Illinois at Urbana-Champaign. 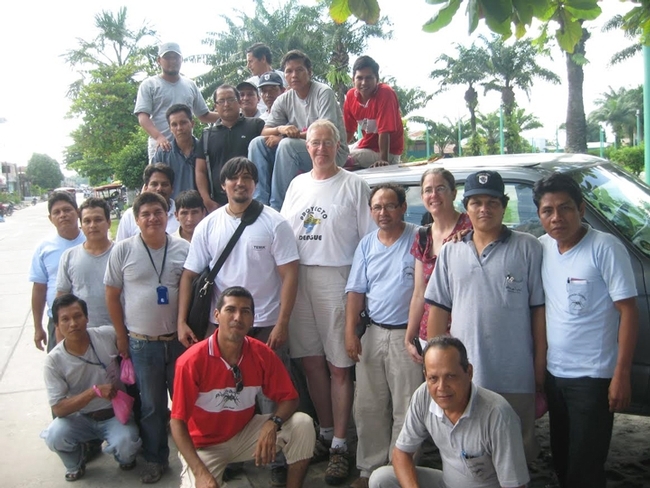 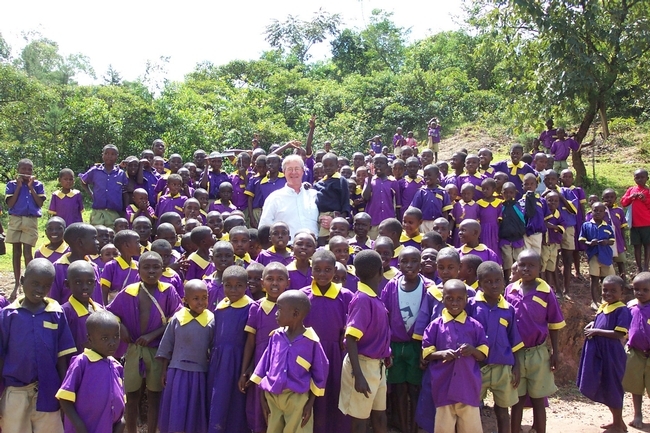 Thomas Scott with schoolchildren in Kenya in 2004. He was there to study malaria. Almost half of the children in this photo had malaria at the time. (Photo courtesy of the Thomas Scott lab)
Tags: dengue (7), medical entomology (4), PBESA (19), Thomas W. Scott (2), Tom Scott (2), Woodworth award (4)
Comments: 0
No Comments Posted.
Login to leave a comment.