They'll never get top billing in a racy novel, let alone star in an R-rated movie.

The "R" word comes into play only when they're referred to as "the rapidly evolving soapberry bugs" or when scientists talk about reproduction.

Evolutionary ecologist Scott Carroll of the UC Davis Department of Entomology and Nematology is a soapberry scientist. In fact, he is the "resident soapberry scientist" behind the spectacular website, "Soapberry Bugs of the World." Scott, who holds a doctorate in biology from the University of Utah, directs the UC Davis-based Institute for Contemporary Evolution, which "observes and experiments with patterns of ongoing evolution in wild and anthropogenic environments."

Explore the soapberry website--it's the work of Carroll, Crystal Perreira and Trevor Fowels--and you'll learn all about these insects.

"Small but powerful, soapberry bugs are quickly adapting as humans alter the world," Carroll writes on the website. "These beautiful insects artfully show how evolution happens every day and why it matters."

"Here at soapberrybug.org, we are collecting and integrating the world's information on all 65 species of soapberry bugs. We present this information in a variety of formats accessible to students, scientists, and anyone with interest."

They encourage you to check out their website:
• Comics, videos, and photos
• Identification guides
• Research results and scientific papers

And if you see soapberry bugs, you're welcome to send your observations to the soapberry scientists.

Well, on a glorious spring day at the UC Davis Arboretum's Storer Garden, we saw about 50 of these intriguing bugs. Fifty Shades of Gray (and Red).  They were looking for mates on a tree trunk. Up, down, around. Repeat. Up, down, around. Well, hello, there!

"The soapberry bug life cycle seems straightforward: male and female mate, the female lays eggs, the young hatch from the eggs, grow, and cast off their skin (molt) as they go through several developmental stages called instars" Carroll says. "Finally, adulthood (along with a fully developed set of wings) and reproductive maturity are achieved and the cycle begins again. However, several aspects of this cycle are more complex than they initially appear. Firstly, just because a male mates with a female, does not necessarily mean that he will father her offspring. In soapberry bugs (and many other organisms), the sperm of the male that was the last to mate with the female has precedence over the sperm deposited by those that mated with her previously. Thus, natural selection favors males with the behavior, morphology, and physiology that increase the chance that they will be the last male to mate with any given female before she lays her eggs. This phenomenon inevitably contributes to reproductive competition between males."

There you have it. No soap opera. No romance. No playing around. Just 50 Shades of Gray (and Red). 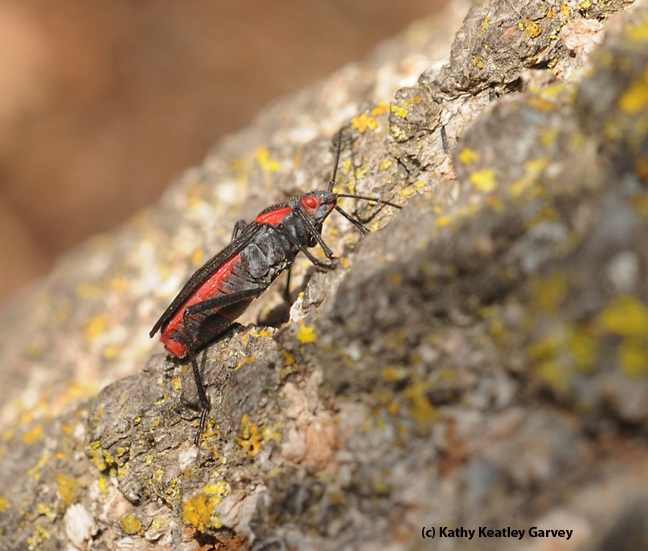 A lone soapberry bug searching for a mate in the UC Davis Arboretum, off Garrod Drive. (Photo by Kathy Keatley Garvey) 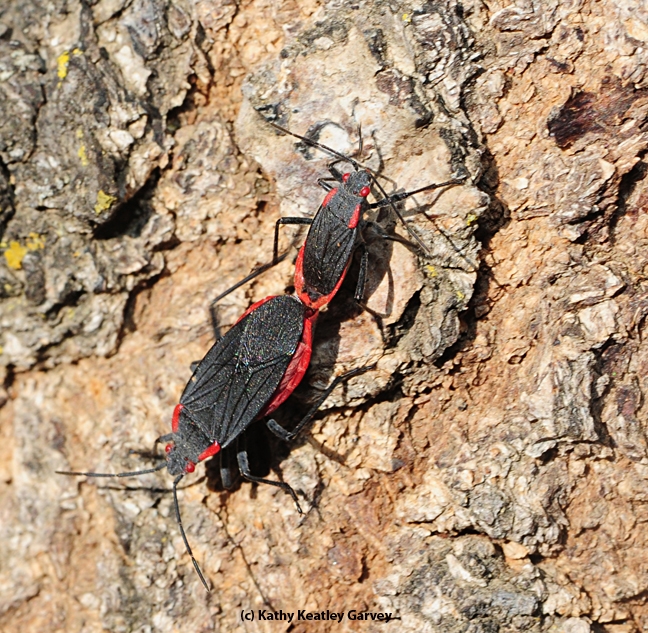 Love in the UC Davis Arboretum, the insect version of "Fifty Shades of Gray (and Red)." (Photo by Kathy Keatley Garvey) 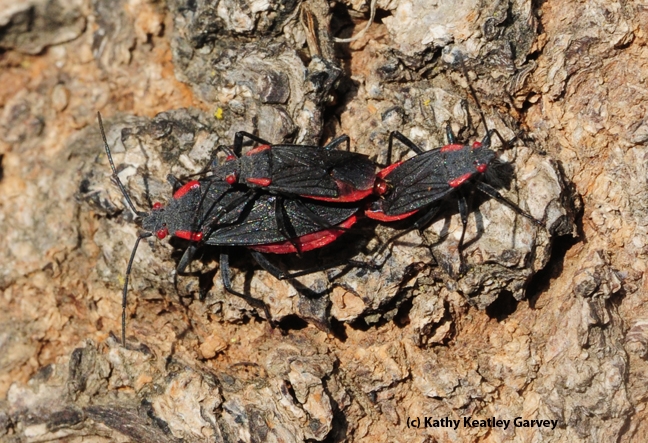 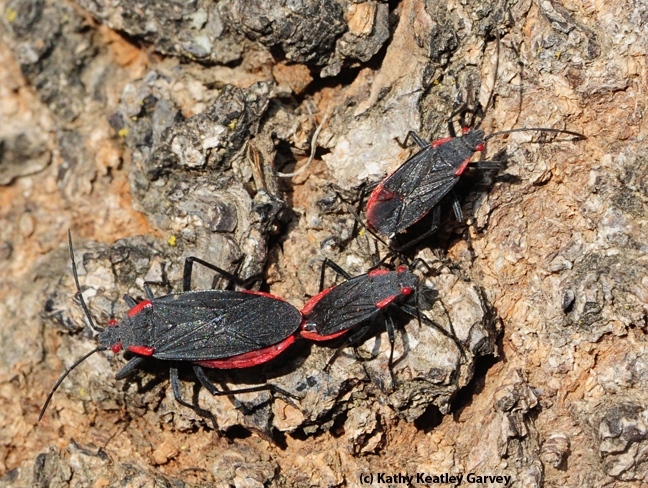