Klittich, who grew up in the nursery business, will receive a two-year $10,000 scholarship, or $5000 per year. The scholarship is awarded to a master's or doctoral candidate studying horticulture or a related field and seeking a career as a researcher, scientist or educator.

Klittich, who plans to receive his doctorate in entomology in 2016, aspires to be a floriculture scientist and educator.

"I am very excited," he told AFE. "Support from the industry is a very meaningful and appreciated honor." He said he is grateful for the opportunity to "help the industry move forward" with his work on pest control and management."

The scholarship, established in 2010, is funded by contributions to AFE from the floral industry, the Ecke family and other sources.

Klittich's research focuses on increasing plant resistance to herbivorous and improving integrated pest management (IPM) programs in horticulture and floriculture. He is currently analyzing the effects of silicate fertilizers on leafmining pests in chrysanthemum and gerbera production systems.

"I intend to continue this research by testing silicate fertilizers in field trials at production facilities and on new crops," he told AFE. "This scholarship will help with technical aspects in the laboratory and allow me to travel and do more field work."

"The end goal of any applied research project should be to give useful, needed information to growers and industry personnel," Klittich said.

"Danny has given many presentations of his research at grower meetings in California as well as at regional and national programs under the auspices of the Entomological Society of America," wrote nominator Michael Parrella, professor and chair of the UC Davis Department of Entomology and Nematology.

“He has written several successful grant proposals, has a number of practical publications and he is committed to a research/extension career focused on the floriculture/nursery industry," Parrella noted. Klittich has also collaborated with growers in Ventura and Santa Barbara counties, including Ocean Breeze International, Pyramid Flowers, Inc., and GroLink Chrysanthemums.

"We have been impressed with his practical and technical knowledge and his experience with research projects,” wrote Rene Van Wingerden and Phil Soderman of Ocean Breeze in their recommendation letter. “Daniel has an excellent understanding of the needs of agriculture/horticulture growers.”

Klittich, from Fillmore, Ventura County, is a graduate of Fillmore High School and valedictorian of the Class of 2006. As a youth, he worked at his family's nursery, Otto and Sons Nursery, Inc., Fillmore. He was also active in 4-H and Boy Scouts, achieving the rank of Eagle Scout.

Klittich received his bachelor degree in entomology from UC Davis in 2010. Following his graduation, he worked in the Parrella laboratory, helping to maintain the greenhouses and experimental plants and assisting with pesticide efficacy trials on several crops and pests including spider mites, leafminer and mealbugs. He enrolled in the doctorate program in 2012 and continues his work in the Parrella lab. He is the current president of UC Davis Entomology Graduate Student Association.

Active in the Entomological Society of America (ESA) and the Pacific Branch of ESA, Klittich was a member of the UC Davis championship team that won the national ESA student debate in 2014 and 2013. The 2014 topic dealt with whether the agricultural use of neonicotinoids should be banned, while the 2013 topic centered on whether to use  GMOs to increase food security in regions where the technology is not universally accepted.

Klittich serves as a teaching assistant for a UC Davis entomology class on "Natural History of Insects" and co-organized a freshman seminar in 2013 on "Insects in Industry."

The American Floral Endowment is dedicated to advancing the industry through funding floriculture research, educational grants and scholarships. More than $15 million has been funded toward research projects benefiting the entire industry, and more than $600,000 has been funded in scholarships designed to attract and retain the future leaders of the industry. 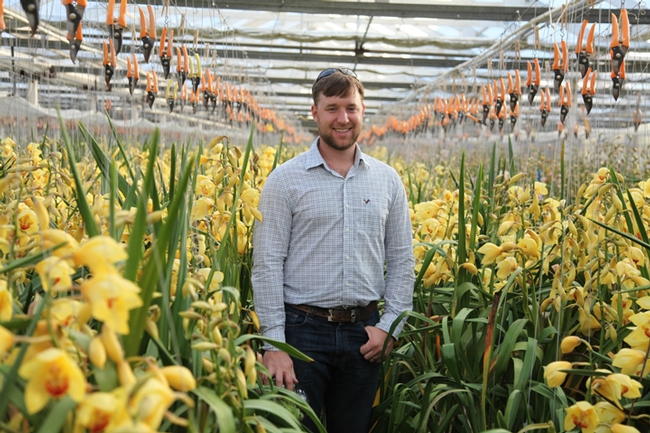