Arrival of the 'Red Bug' to Central Coast vineyards
Published on: April 10, 2015

The 'Red Bug' (Scantius aegyptius) has recently become more visible in some vineyards in Santa Barbara and San Luis Obispo County. This bug was first documented in the USA in 2009, being found in Orange County in Southern California; since that time it has been observed over an increasingly wider range. For detailed close-up images see the UC Riverside Center For Invasive Species Research website:

The bugs can congregate in very large numbers under the loose bark of grape vines, with their presence being very obvious due to their distinctive bright red coloring. This may lead growers to suspect that the bugs could be a potential pest causing damage to the vines. However, these bugs feed on seeds of a number of plant species, and they are not known to feed on grape vines or cause any damage to vineyards at this time. 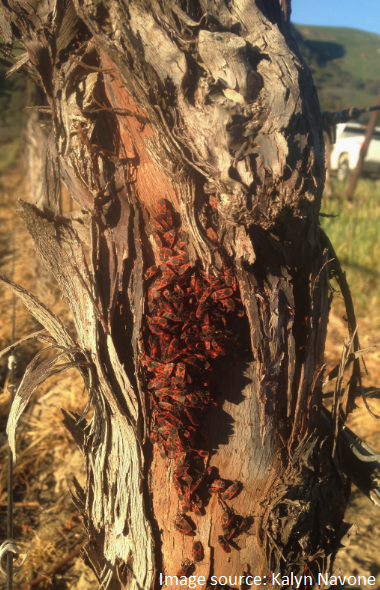