Stacy Hishinuma (Photo by B. Korhely)
Her research pursuit of a tiny beetle that is wreaking havoc on walnut and butternut trees throughout the United States has led to a major honor.

Seybold's research group has led the effort to characterize the disease in California and to develop a nationwide detection program for the beetle. They recently published two papers in the journal PLOS ONE that characterize the genetic diversity and invasion patterns of both the pathogenic fungus and the beetle in the United States. Scientists believe that TCD occurs only on walnut, butternut, and wingnut, but it is most damaging to native black walnuts, Juglans californica, J. hindsii, and J. nigra although the disease has been recorded on at least 10 species of walnuts or their hybrids in California. Often the first symptoms of TCD are flagging and yellowing leaves and branch dieback, Seybold said. Affected branches show sap staining and pinhole-sized beetle holes. Beneath the surface are dark stains caused by the funguhe news is startling, but not totally unexpected. 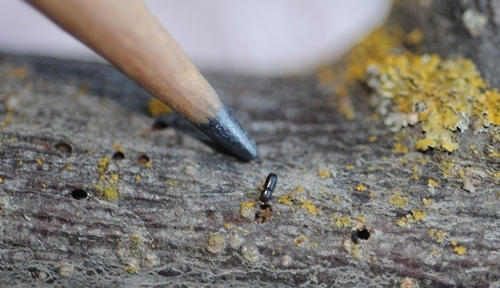