Lynn Kimsey
DAVIS--The UC Davis Department of Entomology and Nematology will celebrate the fifth anniversary of its bee garden on Saturday, May 2.

The event will take place from 10 a.m. to 2 p.m. at the Häagen-Dazs Honey Bee Haven, a half-acre bee garden located on Bee Biology Road next to the Harry H. Laidlaw Jr. Honey Bee Research Facility. A public ceremony will be held from 10:30 to 11:30 a.m.

Michael Parrella, professor and chair of the department, will welcome the crowd at 10:30 a.m. Lynn Kimsey, director of the Bohart Museum of Entomology and professor of entomology, was the interim chair of the department and directed and organized the installation of the garden. It was planted in 2009, thanks to a generous donation from Häagen-Dazs. More than 50 percent of their ice cream flavors depend on pollination.

Raj Brahmbhatt, associate brand manager of Häagen-Dazs Ice Cream at Nestle USA, Dreyer's Ice Cream company, will speak at 10:50 a.m. on “What the Haven Means to Us.”

Christine Casey, manager of the haven, will discuss “What Your Donations Mean to the Haven” at 11:15. A catered donor luncheon will follow at the UC Davis Conference Center, across from the Mondavi Center.

Public events at the haven through 2 p.m. wiill include discussions on how to observe and identify bees, what to plant to help bees, how to use native bee houses. There also will be beekeeping demonstrations and garden tours. The garden is open to the public from dawn to dusk every day. Admission is free. Tours (a nominal fee is charged) can be arranged with Casey at cacasey@ucdavis.edu. To book a tour, access the website and click on "Visit Us."

An article on the Laidlaw bee research published on the UC Agriculture and Natural Resources website and written by communications specialist Kathy Keatley Garvey of the Department of Entomology and Nematology, drew the  attention of Häagen-Dazs and led to the donation. The article featured the work of bee-breeder geneticist Susan Cobey. Kimsey suggested that the funds be used for a public bee garden and the funding of a Häagen-Dazs Postdoctoral Fellow, which was awarded to insect virus researcher Michelle Flenniken, then a postdoctoral scholar in the Department of Microbiology and Immunology at UC San Francisco. A member of the California State Society of the Daughters of the American Revolution photographs the check presentation. From left are Chris Casey, manager of the haven; Debra Jamison, State Regent of DAR; and Karen Montgomery, the state project chair. (Photo by Kathy Keatley Garvey)
The garden was planted and came to life under the direction of Kimsey. "I suggested the idea of a demonstration bee garden that would serve two purposes, to provide food for our colonies and as a lovely place to educate the public," Kimsey recalled.

Others who had a key role in the founding and "look" of the garden included the UC Davis Art/Science Fusion Program, founded and directed by the duo of entomologist/artist Diane Ullman, professor and former chair of the UC Davis Department of Entomology, and self-described "rock artist" Donna Billick. The art in the garden is the work of their students, ranging from those in Entomology 1 class to community residents. Seventeen-year-old Boy Scout Derek Tully of Troop 111 planned, organized and built a state-of-the-art fence around the garden as his Eagle Scout project. His father, Larry Tully, and troop members assisted. The project saved the department at least $30,000.

Melissa Borel Gable served as the founding manager of the garden. Under her direction and the work of 19 volunteers, the garden was named one of the top garden destinations in the Sacramento/Yolo area. (See http://ucanr.edu/blogs/blogcore/postdetail.cfm?postnum=10205) The founding gardeners, in addition to Gable were Davis residents Mary Patterson, Tyng Tyng Cheng, Kristen Kolb, Nancy Stone, Marion London, Judy Hills, Laura Westrup, Kathy Olson, Nyla Weibe, Gary Zamzow, Randy Beaton, Janet Thatcher, Kate McDonald and Kili Bong, and her son, Evan Marczak; and Woodland residents Laurie Hildebrandt and Joe Frankenfield. The 19 volunteers chalked up 5,229 hours of service between May 2010 and Feb. 15, 2013.  At the $10 minimum wage, that would have amounted to $52,290. The volunteers completed their duties at the haven on Feb. 15.

Kimsey was singled out for her work in founding and directing the installation of the garden when the Pacific Branch of the Entomological Society of America honored her and four others--"The Bee Team"--with the 2013 outstanding team award.

The history of the garden is on the UC Davis Department of Entomology and Nematology website at http://bit.ly/1OAtD6W. The new haven website is at http://hhbhgarden.ucdavis.edu/welcome. It includes a list of plants in the haven, by common name and botanical name; a list of donors and how to donate.

Native pollinator specialist Robbin Thorp, distinguished emeritus professor of entomology, monitors the garden for bees and has found more than 80 species. Both he and Extension apiculturist Eric Mussen had an integral part in the beginnings of the garden.

Among the newest major donors is the California State Society of the Daughters of the American Revolution, which provided bee research funds (Brian Johnson lab), and funds for the haven. See donor list of those who have given $1000 or more. 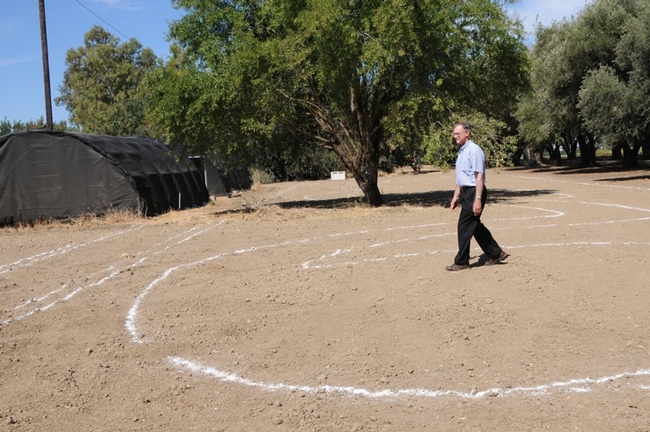 Extension apiculturist Eric Mussen walks on the site of the bee garden on Aug. 12, 2009. He is now an emeritus, effective in July 2014. (Photo by Kathy Keatley Garvey 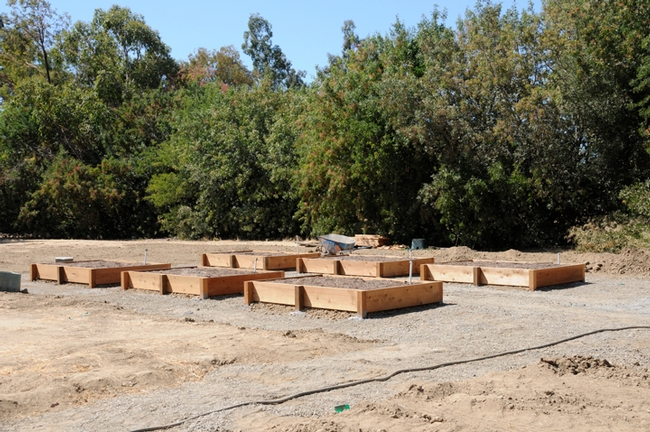 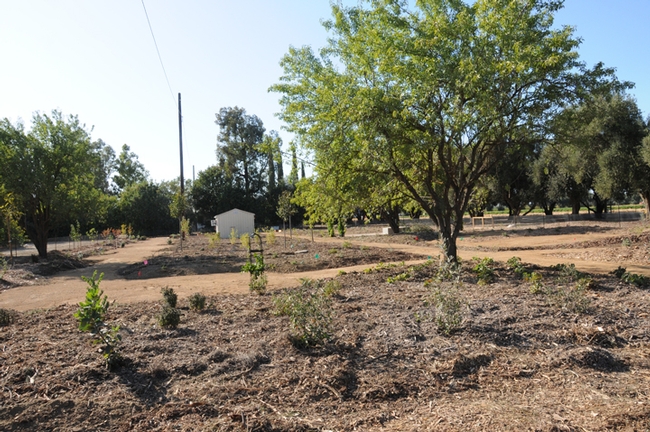 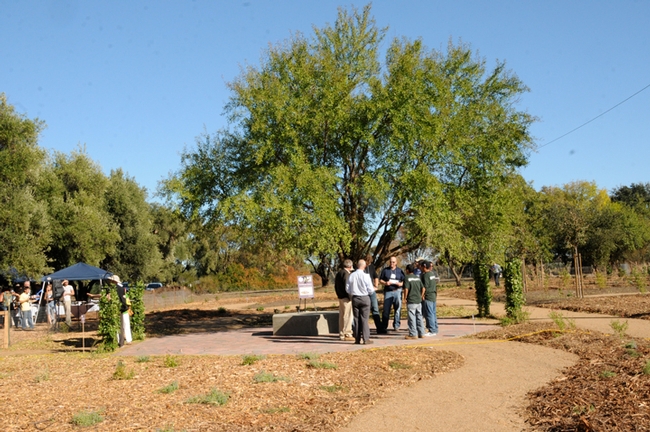 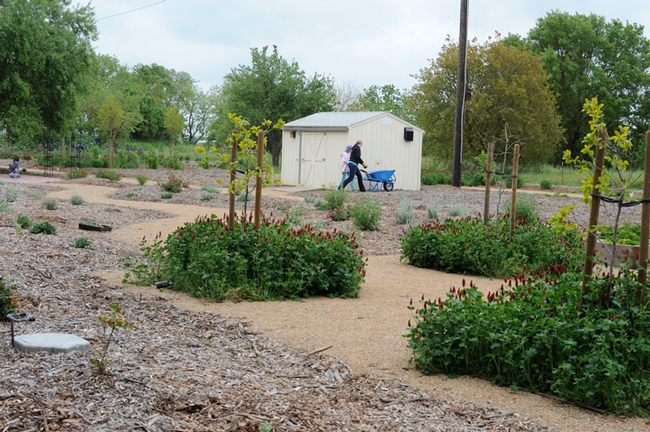 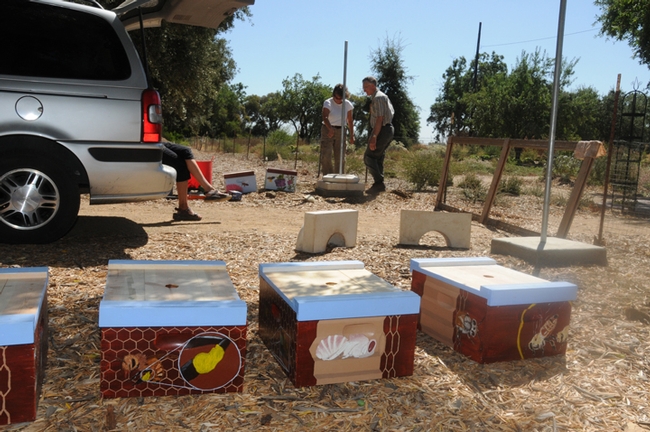 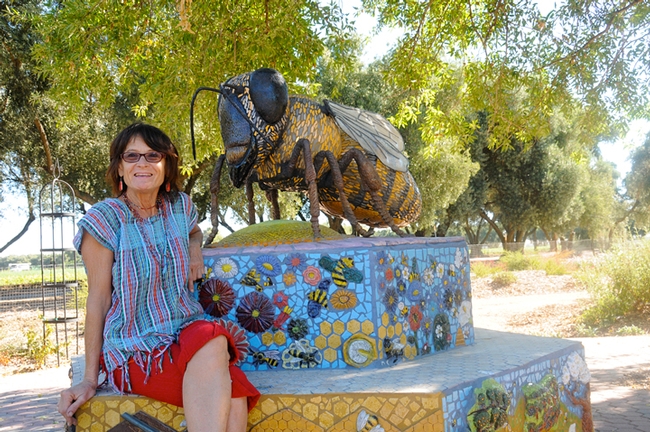 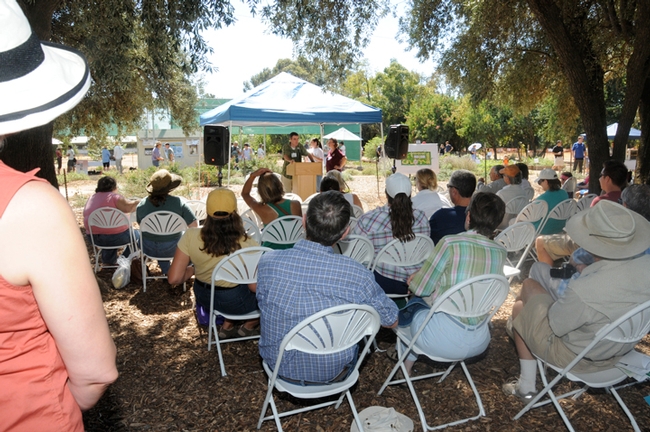 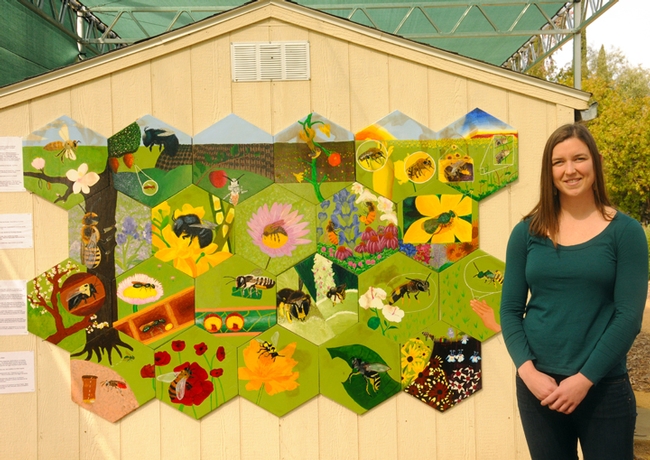 Graduate student Sarah Dalrymple conceived and coordinated the native bee project on the shed. This photo was taken April 14, 2011, right after the installation. (Photo by Kathy Keatley Garvey) 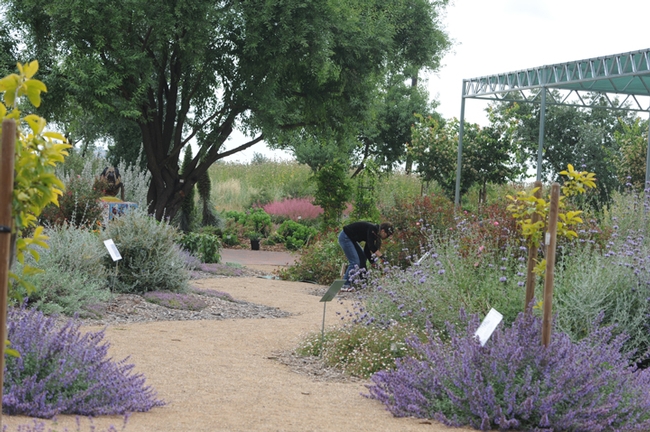 Mature garden: This is what the garden looked like on June 3, 2011. (Photo by Kathy Keatley Garvey) 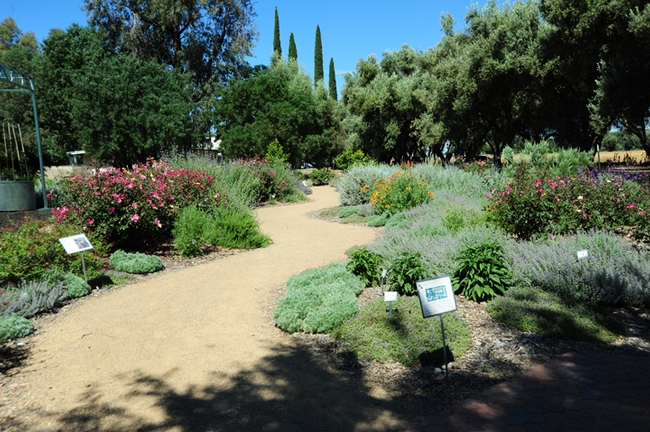 Mature garden: This is what the garden looked like on May 22, 2012. (Photo by Kathy Keatley Garvey) 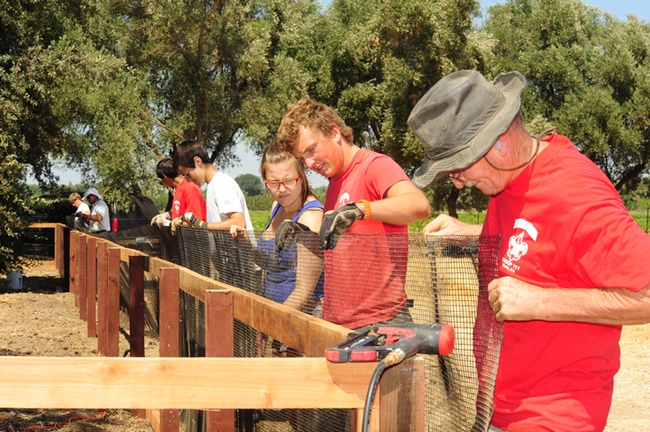