Bora Inceoglu
DAVIS--Groundbreaking research on the discovery of the mechanism that causes neuropathic pain—work co-authored by UC Davis researchers and led by the Bruce Hammock lab at the UC Davis Department of Entomology and Nematology--has been recommended as a F1000 Prime, signifying that it's among the top published research studies worldwide.

F1000 Faculty member John Imig of the Medical College of Wisconsin, Milwaukee, recommended the research, “Endoplasmic Reticulum Stress in the Peripheral Nervous System Is a Significant Driver of Neuropathic Pain," published July 6 in the Proceedings of the National Academy of Sciences.

F1000 is a continually updated collection of more than 145,000 recommendations of top articles in biology and medicine. F1000, updated daily by the F1000 Faculty, covers more than 3700 peer-reviewed journals.

In the groundbreaking research estimated to affect millions of patients globally, the UC Davis scientists found that a biological process, termed ER stress, is the significant driver of neuropathic pain. Lead researchers Bora Inceoglu of the Hammock lab UC Davis Department of Entomology and Nematology/UC Davis Comprehensive Cancer Center, and Ahmed Bettaieb of the Fawaz Haj lab, Department of Nutrition, pinpointed the key mechanism that causes neuropathic pain--a complex, chronic and difficult-to-treat pain caused by nerve injuries from trauma or from such diseases as diabetes, shingles, multiple sclerosis and stroke.

The research should ignite the discovery of a new generation of therapeutics, paving the way for more efficient and effective ways to alleviate neuropathic pain, the researchers said.

“This is a fundamental discovery that opens new ways to control chronic pain,” said corresponding author and senior researcher Hammock, a distinguished professor of entomology who holds a joint appointment with the UC Davis Department of Entomology and Nematology, and the UC Davis Comprehensive Cancer Center.

“We can now specifically search for agents to control ER stress and its downstream pathways,” said Hammock. “This search is already underway in a number of laboratories working on cancer and other diseases.”

“Diabetic neuropathy is a common consequence of both type 1 and type 2 diabetes which affects 60 to 70 percent of the diabetic patients,” said Ahmed Bettaieb, who has just accepted a position as assistant professor in the Department of Nutrition, University of Tennessee-Knoxville.”

Inceoglu showed that neuropathic pain could be initiated by diverse compounds that cause ER stress and reversed by agents that block it.

Holly Caster, editor of PAINWeek, interviewed Hammock July 10 and published a Q&A  in a piece titled "Pain Reporter: The Professor and the Science Behind the Potential Management of Neuropathic Pain."

Hammock pointed out that his research "started as very fundamental research in developmental biology using insects as models.  We found that the soluble epoxide hydrolase is highly conserved in evolution and asked its role in man and other mammals.  We first found that inhibitors of the enzyme stabilize natural anti hypertensive compounds called EETs and reduced blood pressure.  We then found that they reduced inflammation and inflammatory pain.  We tried neuropathic pain as an indication because it is so difficult to treat and were surprised to find that the sEH inhibitor worked far better than drugs like gabapentin and Lyrica currently sold for neuropathic pain. I have attached a comparison.  Having failed to interest large pharma companies in this biology we started a small company EicOsis to move the inhibitors to the clinic for treating pain in both companion  animals and man.  "

The research, Hammock noted, was initially done on rodents. "The fact that the compounds work in a variety of species builds confidence.  It argues that with regard to neuropathic pain, different species are similar (dog, horse, man, rat, etc.)," he told her. 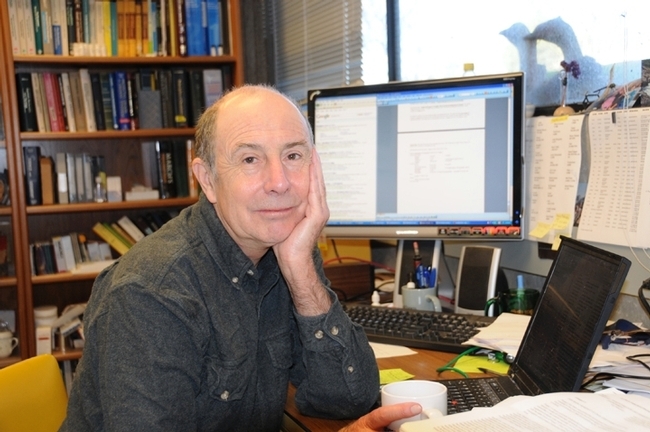