Bug Squad
sitenum=63
Happenings in the insect world
What Do You Know About Neonics? A worker bee. (Photo by Kathy Keatley Garvey)
What do you know about neonicotinoids, aka neonics?

An educational opportunity to learn more about them--the truths and the myths--will take place on Wednesday, Sept. 9 at the University of Caifornia, Davis, and you're invited. It's open to the public.

The conference, themed “Truth or Myth: Neonicotinoids and Their Impact on Pollinators: What Is the Science-Based Research?” will take place from 10 a.m. to 4 p.m. in the UC Davis Conference Center, 550 Alumni Lane. 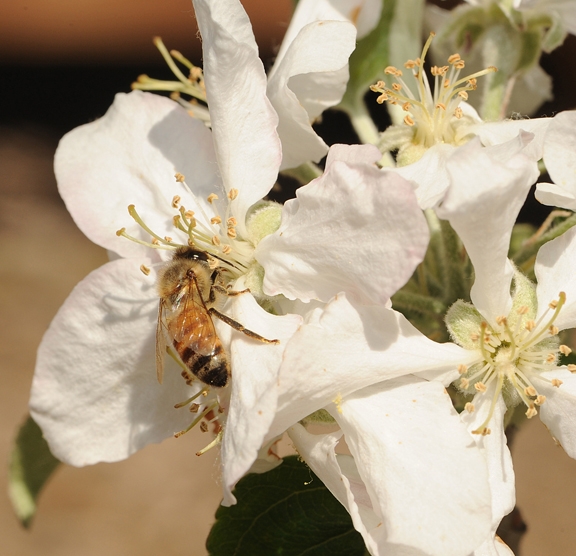 A honey bee pollinating an apple blossom. (Photo by Kathy Keatley Garvey)
Tags: California Center for Urban Horticulture (18), honey bees (372), neonics (3)
Comments: 2
Comments:
by Kate Lincoln
on August 7, 2015 at 10:16 AM
Thanks Kathy! We at CCUH are buzzing about this conference! (sorry for the cheese, I couldn't resist) Should be great!
by Carol Constantine
on August 10, 2015 at 9:22 AM
I know that Home Depot sells plants labeled "neonicitinoids approved by the FDA". This is not true: neonicitinoids are listed as being under investigation, and cannot possibly be "approved" until 2018.
Leave a Reply: