Confusion exists as to whether National Honey Bee Day is Aug. 15 or Aug. 22.

The U.S. Congress, however,  has proclaimed National Honey Bee Day as Aug. 22.

It really doesn't matter which day it is. We should celebrate National Honey Bee Day every day.

European colonists brought the honey bee to America (Jamestown colony, Virginia) in 1622.  It wasn't until 1853, however, that the honey bee made its way to California, San Jose, to be more specific.

So all honey bees are descended from a common ancestor in Africa. It was out of Africa and into Europe and then all over the world.

In an article published in Softpedia, Charles W. Whitfield,  professor of entomology at the University of Illinois at Urbana-Champaign, says that "Our analysis indicates that the honey bee, Apis mellifera, originated in Africa and spread into Europe by at least two ancient migrations."

Excerpts from the article:
"The genus Apis contains 10 species, nine of which endemic to Asia. The only exception, Apis mellifera, the common honey bee, is found from sub-Saharan Africa to Central Asia to Northern Europe, and it is represented by more than two dozen distinct geographical subspecies."

"From Africa, the species spread to Europe and Asia, creating distinct genetic lineages (subspecies), including the Italian bee, used extensively for agricultural pollination."

Whitfield points out that the migrations "resulted in two European populations that are geographically close, but genetically quite different. In fact, the two European subspecies are more related to honey bees in Africa than to each other."

Whitfield relates that Europeans  introduced in the Americas at least 10 subspecies from different parts of Europe, Near East and Northern Africa beginning with 1622.

North and South America quickly learned about the South African savanna subspecies, Apis mellifera scutellata, which scientists brought to Brazil in 1956 in an effort to increase honey production. It became known as "the killer bee" because of its aggression as it hybridized and displaced European honey bees.

"By studying variation in the honey bee genome, we can not only monitor the movement of these bees, we can also identify the genes that cause the variations--and that will allow us to better understand the differences," Whitfield said in Softpedia.

We're glad to see the exploding interest in the honey bee--from the backyard beekeeper to the rooftop beekeepers--and the work underway to protect it.

Apis mellifera needs to bee all it can bee. 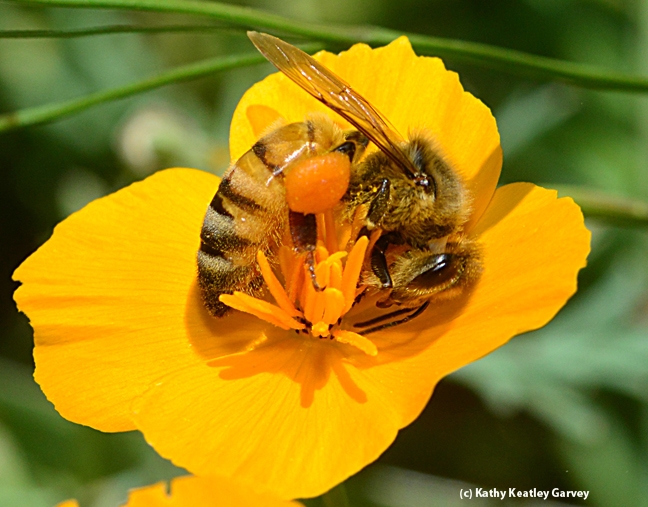 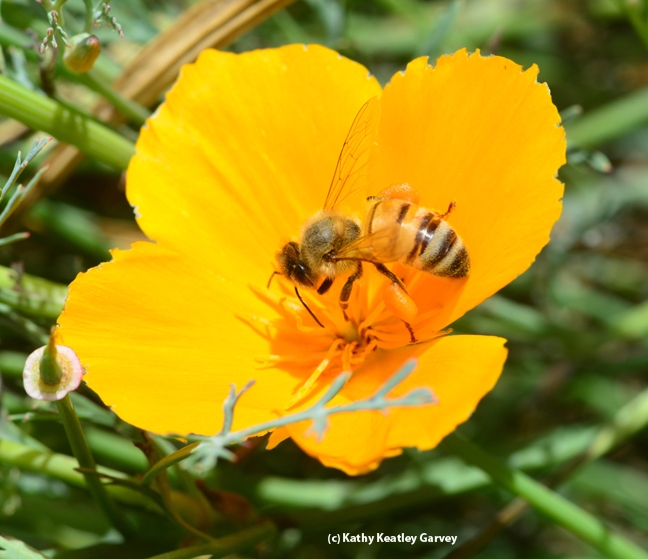 A golden honey bee in a California golden poppy. The poppy yields only pollen, not nectar. (Photo by Kathy Keatley Garvey)
Tags: African origins (1), Apis mellifera (29), Charles Whitfield (1), honey bee (223), National Honey Bee Day (10), Softpedia (1)
Comments: 1
Comments:
by Yvonne Rasmussen
on August 11, 2015 at 11:55 AM
I say we should just celebrate and appreciate honey bees for the whole week from August 15 through August 22. That way you cover both dates.

Thanks for the history of how they got here and beautiful photos as always.
Leave a Reply: