If you've ever seen honey bees foraging on primrose, you may have seen something unusual.

What's with the pollen hanging below their hind legs as they buzz from primrose to primrose?

There's a reason for that.

Distinguished emeritus professor Robbin Thorp of the UC Davis Department of Entomology and Nemalogy alerted us to the reason.

"Note the stringy mass (mess) of pollen hanging below the hind legs of the bee," Thorp points out. "Honey bees have great difficulty in collecting (actually packing into their corbiculae) pollen from any large flowered species of Oenothera.  The pollen grains are very large, more than 100 microns, and tied together with viscin threads to form a webby mass.  This is ideal for transfer by hawkmoths where stringy masses get attached to their undersides as they probe for nectar."

"Oenothera pollen," Thorp says, "can be collected by some native bees where the scopae are modified to contain sparse simple hairs where the webby pollen can be easily stored.  But the corbiculae of honey bees are not well suited to handle this webby stuff, since it will not pass neatly through the 'pollen mill' of the honey bee hind leg."

He recalls seeing the same situation when honey bees were working his desert evening primroses.

And speaking of honey bees, it's National Honey Bee Day on Saturday, Aug. 22.

Extension apiculturist (emeritus) Eric Mussen of the UC Davis Department of Entomology and Nematology, wrote a piece on a UC ANR blog published this week. He initially published it in the June 2013 edition of the UC IPM Retail Nursery & Garden Center IPM News but it's quite timely.

Excerpts:
"The actual cause of honey bee decline is still uncer­tain," Mussen says. "What is known is a number of factors are probably involved. Honey bees are their most robust and able to best contend with stresses when well fed. In addition to water, honey bees require nectar sources for car­bohydrates and a varied mix of pollens to provide proteins, lipids, vitamins, minerals, sterols, antioxidants, and other nutrients. Drought, flooding, and conversion of for­mer foraging grounds into large agricultural monocultures, highways, airports, develop­ments, and so forth have led to honey bee malnutrition in many locations."

"In the last 20 years beekeepers have been en­countering a series of previously exotic pests that invade the hive and kill bees, such as the varroa mite; new honey bee diseases, includ­ing Nosemaceranae; and many viruses."

"Pesticides can also be involved in bee decline, especially when applied to plants when they are in bloom and bees are for­aging," Mussen points out. "Many insecticides are highly toxic to bees including virtually all organophos­phates, carbamates, and pyrethroids. If not killed in the field, foraging bees can collect residue-contaminated pollens and bring them back to the hive for immediate consumption or long-term storage. There are serious concerns over the chronic, sublethal effects of these residues on the physiology of immature and adult bees."

"A newer class of insecticides, the neo­nicotinoids, which include imidacloprid, clothianidin, and dinotefuran, also pose hazards for honey bees. These products are systemic materials that move through the plant and are included in the nectar and pollen of flowers when they bloom. Although the neonicotinoid residues may not kill bees immediately, they may have sublethal effects, such as suppressing im­mune and detoxification systems, causing bees to be more sensitive to other stresses."

If you want to know more about neonics, be sure to attend the UC Davis neonics conference on "Truth or Myth: Neonicotinoids and Their Impact on Pollinators: What Is the Science-Based Research?” from 10 a.m. to 4 p.m., Wednesday, Sept. 9 in the UC Davis Conference Center.  UC Davis researchers and state officials will address the crowd, announced conference coordinator Dave Fujino, director of the UC Davis-based California Center for Urban Horticulture. You can register on the CCUH website. 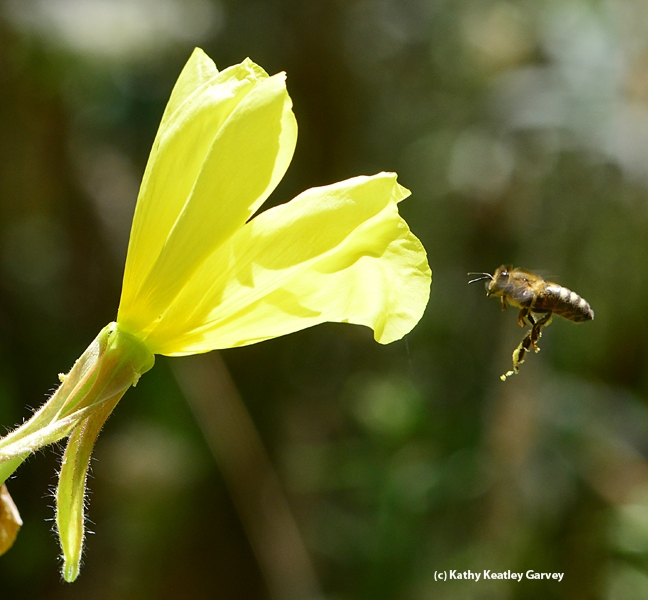 A honey bee prepares to visit another primose. Note the stringy mass of pollen hanging from her hind legs. (Photo by Kathy Keatley Garvey) 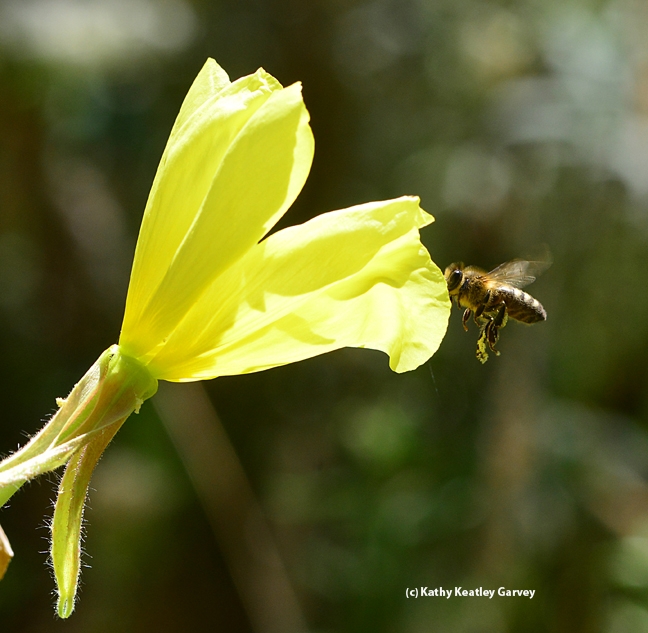 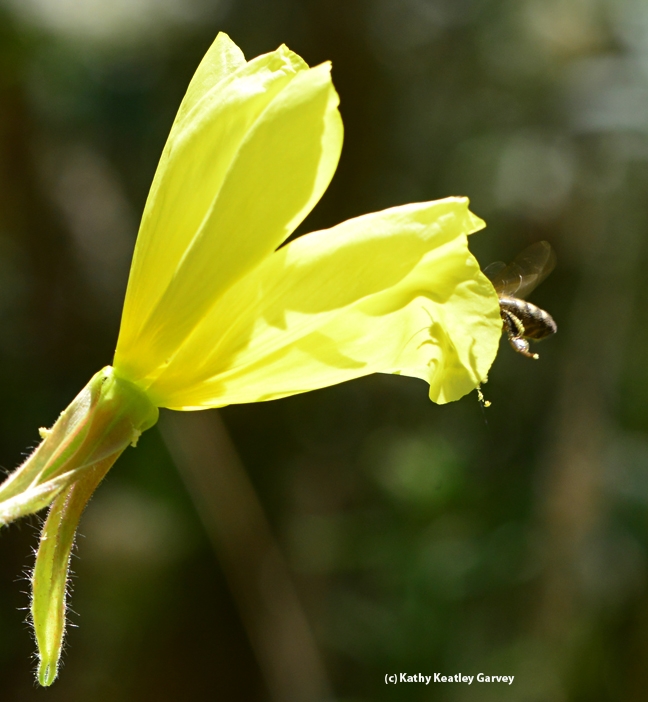 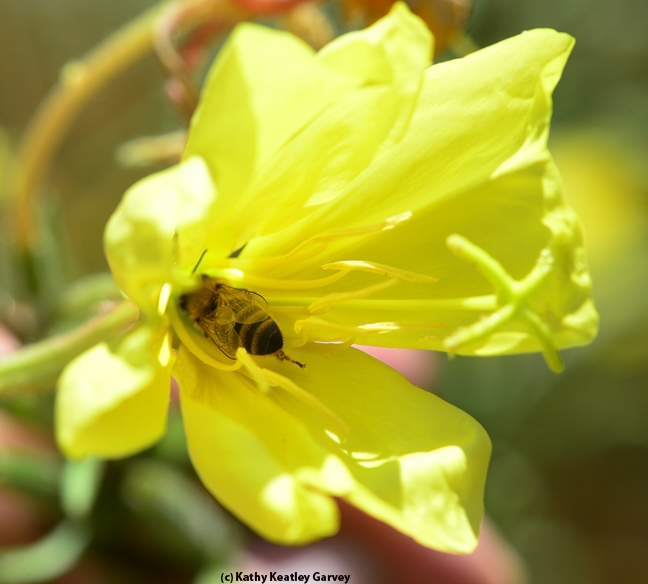