Bug Squad
sitenum=63
Happenings in the insect world
'Bee' There Oct. 2 In the Bee Garden The UC Davis Department of Entomology and Nematology has scheduled a fall open house, the last of the season, at its Häagen-Dazs Honey Bee Haven on Friday, Oct. 2 from 5:30 to 7 p.m.  It's free and open to the public. Two bees working a sunflower. Bees from the nearby Harry H. Laidlaw Jr. Honey Bee Research Center frequent the garden. (Photo by Kathy Keatley Garvey)
They will staff a table and answer pest questions and also have a IPM Prize Wheel that kids and adults can spin. The questions will feature several topics such as pollinators, beneficial insects and IPM practices.  They will have resource information for home gardeners, as well as stickers and hand stamps for kids.

The bee garden was planted in the fall of 2009 under the direction of then interim department chair Lynn Kimsey, director of the Bohart Museum of Entomology and professor of entomology. At the time, she said: ""The Honey Bee Haven will be a pollinator paradise. It will provide a much needed, year-round food source for our bees at the Harry H. Laidlaw Jr. Honey Bee Research Facility. We anticipate it also will be a gathering place to inform and educate the public about bees. We are grateful to Haagen-Dazs for its continued efforts to ensure bee health." Others who played a key role in the founding and "look" of the garden included the UC Davis Art/Science Fusion Program, founded and directed by the duo of entomologist/artist Diane Ullman, professor and former chair of the UC Davis Department of Entomology, and self-described "rock artist" Donna Billick, a noted artist. Billick crafted the six-foot long mosaic ceramic sculpture of a worker bee, "Miss Beehaven," that anchors the garden. The art in the garden is the work of their Entomology 1 students and community residents.  Extension apiculturist (now emeritus) Eric Mussen of the UC Davis Department of Entomology offered input throughout the conception, design and installation. Davis Boy Scout Derek Tully built the state-of-the-art fence around the garden as his Eagle project. (See more of history here)

New additions include a viable honey bee hive; benches and a shade structure donated by the California Society of the Daughters of the American Revolution; and more bee condos for leafcutter bees and blue orchard bees. The garden is managed by staff director Christine Casey at cacasey@ucdavis.edu and faculty staff director Elina Niño, Extension apiculturist, at elnino@ucdavis.edu. Check out the haven website for a list of plants (both common and scientific names), upcoming events, how to volunteer, how to donate, and other information. 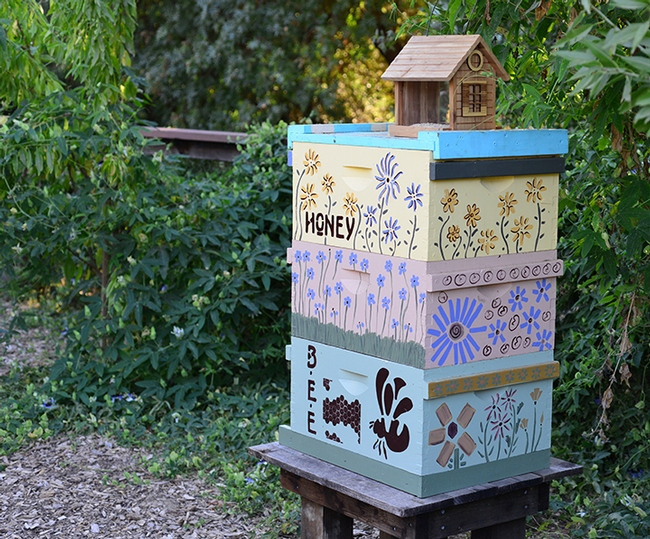 A viable bee hive is a new addition in the bee garden, which was planted in the fall of 2009.(Photo by Kathy Keatley Garvey) 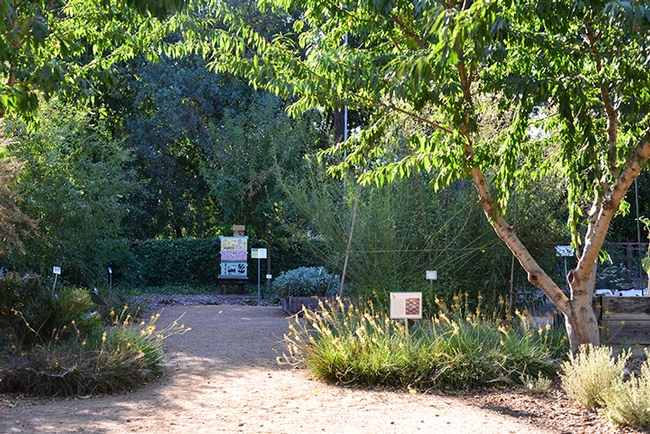 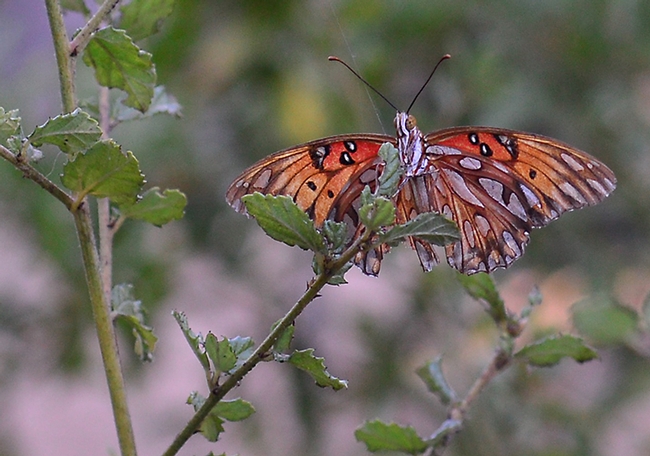