James R. Carey
It's that time of year again.

Teachers ask their students to make an insect collection. The project is considered a "rite of passage." However, often the students--whether they be middle school, high school or college level--don't know where to begin. Ditto for 4-H'ers enrolled in entomology projects.

The UC Davis Department of Entomology and Nematology to the rescue. There, on the home page, students can access short, clear, concise videos on how to create an insect collection. They can watch and download them for free.

The story behind the story: Back in 2010,  James R. Carey. professor of entomology, wanted to teach UC Davis students how to create and produce short videos that could tell the story in a minute or less. And he did just that.

The entire series, totaling 11 clips ranging in length from 32 seconds to 77 seconds, can be viewed in just less than 10 minutes.

“So in less than 10 minutes, someone can learn how to make an insect collection,” Carey says. The clips are tightly scripted, with an emphasis on brevity, simplicity and low cost.

The project continues to draw widespread interest and won an award from the Entomological Society of America. Carey, now a distinguished professor in the Department of Entomology and Nematology and active in research, teaching and public service, went on to win the ESA's 2015 national teaching award. It will be presented  at the ESA's November meeting in Minnesota.  The "How to Make an Insect Collection" project  was just one of the many factors considered. (See his many other projects on his website.)

So, how do you make an insect collection? Easy!

Here are the videos: 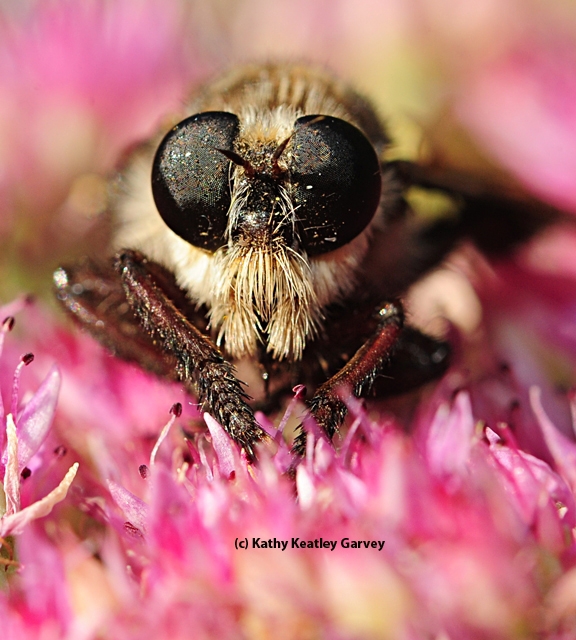 Robber fly staring at the photographer. A robber fly is one of many insects that students use in "How to Make an Insect Collection." (Photo by Kathy Keatley Garvey)
Tags: 4-H (7), biology teachers (1), Entomological Society of America (102), ESA (15), how to make an insect collection (4), James R. Carey (32)
Comments: 0
No Comments Posted.
Leave a Reply: