Tireless volunteer Jeff Smith with Lynn Kimsey, director of the Bohart Museum of Entomology and professor of entomology at UC Davis. (Photo by Kathy Keatley Garvey)
Entomologist Jeff Smith of Rocklin, an associate at the Bohart Museum of Entomology who has saved the museum some $160,000 over a 27-year period through his volunteer service, received a well deserved "Friend of the College” Award of Distinction from the UC Davis College of Agricultural and Environmental Sciences last Friday, Oct. 2 at its annual celebration.

And appropriately, butterflies adorned his tie.

But since this is a Bug Squad blog, we'll focus on the "bugman." (Yes, "bugman" is in his email account.)

Smith has “brought us international acclaim and saved us $160,000 through donations of specimens and materials, identification skills and his professional woodworking skills," Kimsey wrote in her nomination. "This does not include the thousands of hours he has donated in outreach programs that draw attention to the museum, the college and the university.” Morpho cypress cyanide butterfly. (Photo by Kathy Keatley Garvey)
“As if this weren't enough, Jeff has made many other contributions to the museum. He donated his brother's collection and library when his brother died unexpectedly. He and his wife have made financial contributions towards the museum's endowment, and he donates other materials and specimens he collects on various collecting trips in the U.S. and overseas.”

Indeed, it is no easy feat to pin a butterfly or moth. Just ask research entomologist Tom Zavorink, a Bohart Museum associate.

"Personally, I am astounded by the thousands upon thousands of butterflies and moths that Jeff has prepared for display or scientific study," Zavorink said. "This is no small task because butterfly and moth specimens are usually brought from the field in envelopes or boxes with their wings folded over their backs or around their bodies, and preparing them for display or scientific study involves relaxing them in a humid chamber so their wings and legs can be manipulated, carefully spreading open the wings, positioning them on a flat surface, and securing them in that position until the specimen dries again. This is an onerous task that many entomologists, myself included, shun because we don't have the time, manual dexterity, or patience it takes to prepare quality specimens."

Smith puts it this way:  “Entomology is my passion and the Bohart Museum is my cause.”

The Bohart Museum's regular hours are from 9 a.m. to noon and 1 to 5 p.m. Mondays through Thursdays. The museum is closed to the public on Fridays and on major holidays. Admission is free. Open houses, focusing on specific themes, are held on weekends throughout the academic year.  See open house schedule. 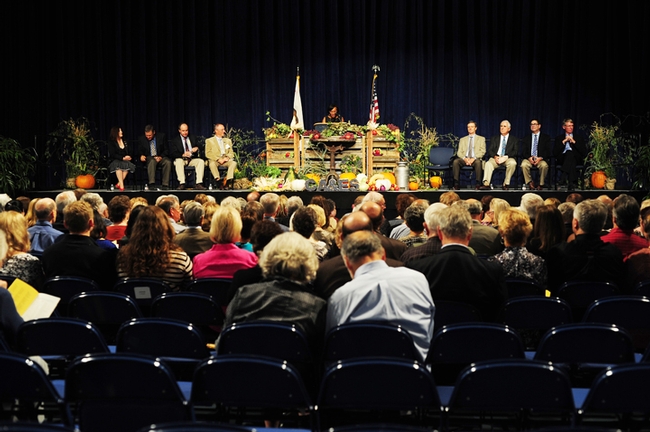 Helene Dillard, dean of the UC Davis College of Agricultural and Environmental Sciences, welcomes the crowd at the Oct. 2nd college celebration honoring recipients of the Award of Distinction. (Photo by Kathy Keatley Garvey) 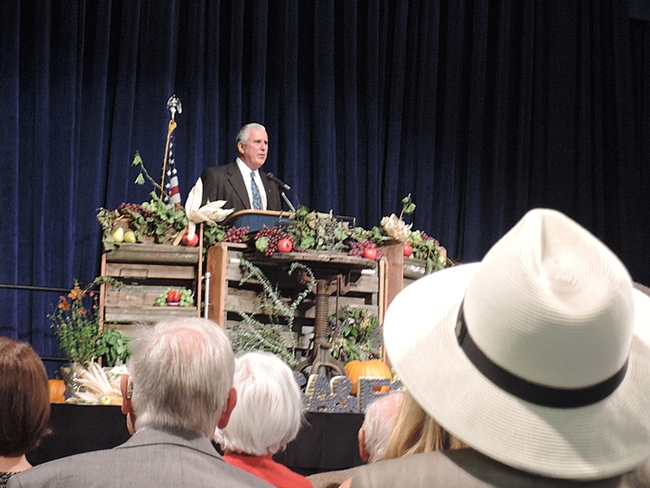 Entomologist Jeff Smith, recipient of a Friend of the College Award of Distinction, addresses the crowd. (Photo by Kathy Keatley Garvey) 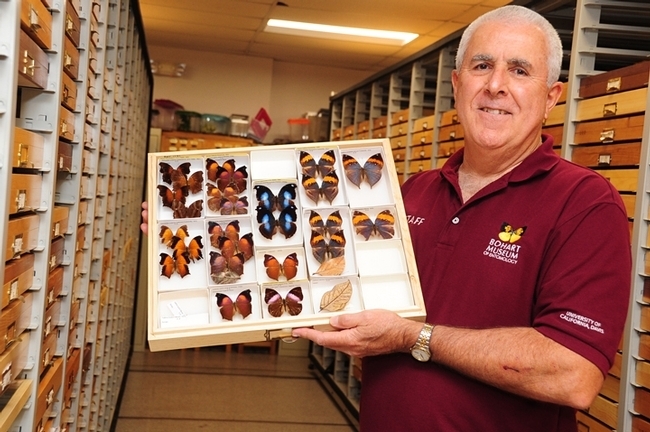