Bug Squad
sitenum=63
Happenings in the insect world
About Those Milkweeds and Their Toxicity...

Monarch caterpillar eating a narrow-leafed milkweed. Note the aphids. (Photo by Kathy Keatley Garvey)
Cornell University evolutionary ecologist Anurag Agrawal, who received his doctorate in population biology at the University of California, Davis in 1999 under the tutelage of major professor Richard “Rick” Karban, is making the news with his groundbreaking research on milkweed toxicity.

In research published Nov. 4 in the Proceedings of the Royal Society B, Professor Agrawal and colleague Georg Petschenka, also of Cornell, found that monarch butterflies (Danaus plexippus) have "evolved" the ability to store toxins, known as cardenolides, that are poisonous to birds. The title of their research article: "Milkweed Butterfly Resistance to Plant Toxins Is Linked to Sequestration, Not Coping with a Toxic Diet."

Lepidopterans and butterfly enthusiasts know that caterpillars digest the toxins in milkweed plants and that they  retain that poison not only as caterpillars, but as chrysalids and adults.

Birds dislike the toxicity and learn to avoid the monarchs. Of course, birds still eat the caterpillars, chrysalids and adults, but not as many.

The take-home message in lay terms? "We learned that the evolutionary pressure of predation can be so strong, that it drives the way insects eat plants, and to eat more toxic plants," Agrawal told us this afternoon.

What about the oleander aphids that suck the juices out of milkweed plants and the lady beetles, aka ladybugs, that eat the aphids?

"The toxicity does impact both the aphids and lady beetles … they don't like it!" Agrawal said. "Well, it is sort of a coevolutionary argument… the aphids have specialized on the milkweeds, so that family is all they eat… but in response, the plants produce cardenolides that do bother them."

"Scientists," wrote Giller, "have long known that milkweed cardenolides, which in most animals disable a vital sodium-potassium pump enzyme if they are absorbed into the blood, serve to make caterpillars and butterflies dangerous meals for their predators, but whether that acquired toxicity was a side effect of an adaptation that allowed monarchs to eat milkweed or had developed separately as a defensive mechanism was unclear."

The paper is being called a landmark.

And those toxins are also "landmark" weapons. Toxic weapons. 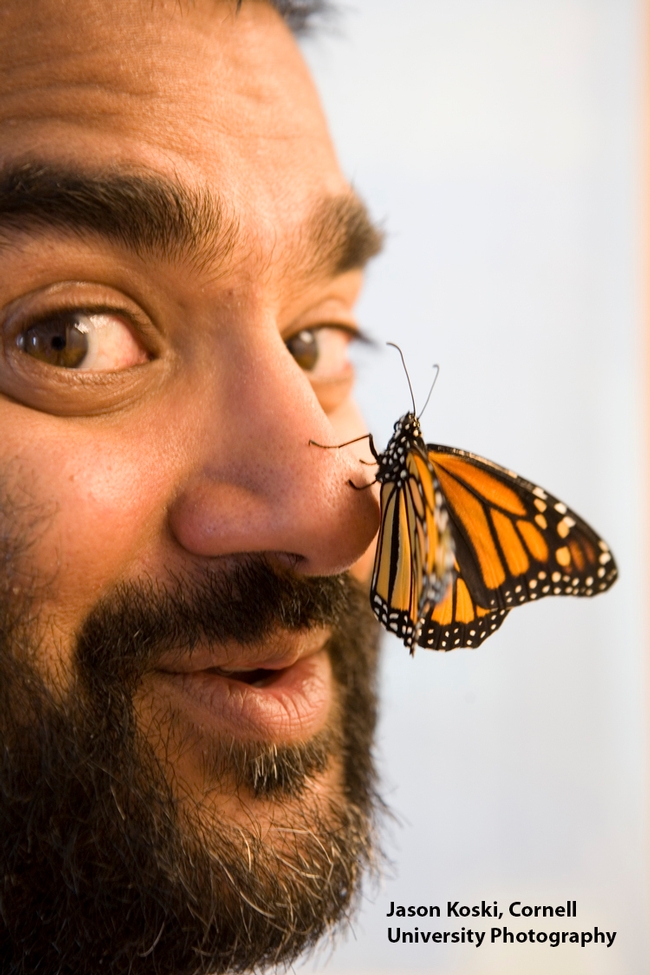