Stacey Rice with her prize-winning t-shirt of a wasp riding a penny-farthing. (Photo by Kathy Keatley Garvey)
It's a “wheel deal.”

It's a wasp on wheels.

A wasp riding a penny-farthing or a high wheel bicycle is the winner of the 2015 annual t-shirt contest sponsored by the Entomology Graduate Students' Association (EGSA) at the UC Davis Department of Entomology and Nematology.

“I wanted to draw a penny-farthing, which is part of the UC Davis culture,” said artist Stacey Rice, a junior specialist in the lab of Extension entomologist Larry Godfrey. “Then I wanted an insect that would be able to put its abdomen on the seat and have long enough legs to reach the pedals.”

She solved the dilemma by creating a “new species” of wasp and drawing the majority of votes from faculty, staff and students to win the annual contest. The result: “Hymenoptera on Bicycle.”

The t-shirt, now available to the public, went on sale at the Entomological Society of America meeting Nov. 15-18 in Minneapolis.

“I love the new design and think it translated very well on the t-shirts,” said EGSA treasurer and entomology graduate student Cindy Preto of the Frank Zalom lab. “ I expect it to be a great seller.”

Rice, who grew up in Roseville and graduated from Oakmont High School, combines science with art. She enjoys creating ceramic art at the UC Davis Crafts Center.

EGSA has launched an online store where the newly designed t-shirt and other favorites can be ordered. For more information on the T-shirt, contact EGSA member Cindy Preto at crpreto@ucdavis.edu. All proceeds benefit EGSA. 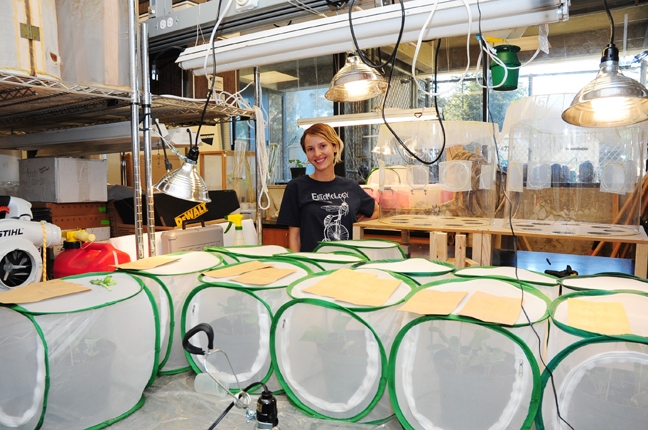