Bug Squad
sitenum=63
Happenings in the insect world
The A's, Bees and C's....

Published on: November 6, 2009
In an aging queen bee, does age affect the quality of her offspring?

ericmussensmall
do some bees leave the hive and never return?

Extension Apiculturist Eric Mussen (right), a member of the UC Davis Department of Entomology faculty, touches on these subjects in the latest edition of from the UC Apiaries, a bimonthly newsletter he's been writing since 1976.

Mussen, who will be the keynote speaker at the 120th annual California State Beekeepers' Association, set Nov. 17-19 in San Diego, keeps beekeepers informed.

His topic at the state beekeepers' meeting? “Glimpses of California’s Beekeeping Future.”  He'll speak at 10:30 a.m. on Tuesday, Nov. 17 at the convention headquarters, the Hilton Resort and Spa.

Mussen, who was named the California Beekeeper of the Year in 2006, won the American Association of Professional Apiculturists’ Award of Excellence in Extension Apiculture in 2007.  In 2008  he received the Distinguished Achievement Award in Extension from the Pacific Branch of the Entomological Society of America.

A noted authority on honey bees, Mussen has been interviewed by Good Morning, America, the Lehrer Hour, National Public Radio,  California Heartland, New York Times and the Los Angeles Times, among other media.

Cobey, who was named the association’s California Young Beekeeper of the Year in 1986, will speak Nov. 17 on “Update on Stock Improvement.” Williams will discuss his work as the UC Davis new native pollinator specialist on Nov. 18.

Meanwhile, hot off the presses, is the September-October edition of from the UC Apiaries. You can read the current edition and back editions, 1994-2009, here. There's no charge to download the newsletters.

The doctor (Mussen has a Ph.D. in entomology from the University of Minnesota, St. Paul) is in. 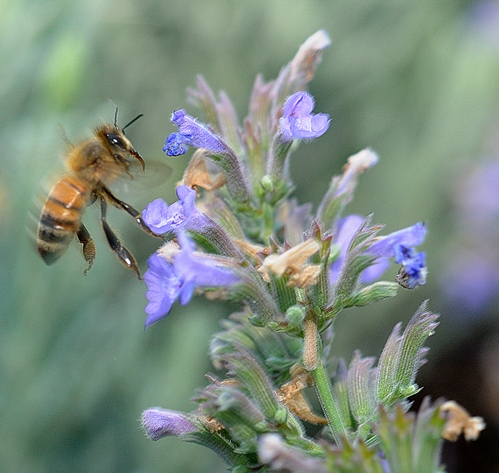 Honey Bee and Catmint
HONEY BEE heads for catmint, a favorite of insect pollinators. The plant (genus Nepeta) is a member of the mint family or Lamiaceae. (Photo by Kathy Keatley Garvey) 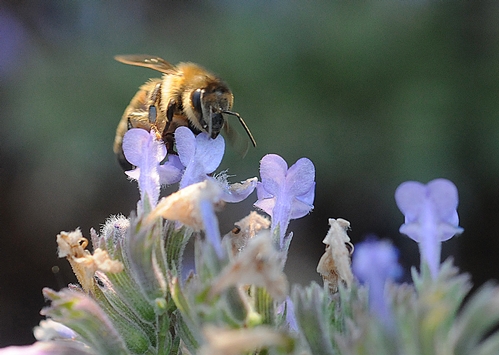