Bug Squad
sitenum=63
Happenings in the insect world
'Fourteen' Is a Lucky Number: That's Where the Monarchs Are The monarchs are at the 14th hole of the golf disc course. (Photo by Kathy Keatley Garvey)
"Fourteen" is a lucky number at the Berkeley Aquatic Park, 80 Bolivar Drive, Berkeley.

Fourteen is considered a day of love and romance, as in the 14th of February, Valentine's Day.

For the first year ever in modern history, monarch butterflies are roosting in Berkeley Aquatic Park. And they've been there since at least mid-November.

They're at the 14th hole on the disc golf course. Thousands roost there, and at any given time, dozens of butterfly aficionados and photographers gather there.

The crowd speaks in hushed tones, as if in a sanctuary.

The monarchs are roosting in a shaded ash tree, next to eucalyptus and pine trees. As the sun warms them, they flutter over to the low-hanging leaves of a eucalyptus for more warmth. Just off the paved path, Canadian geese, ducks, mudhens and seagulls provide meaning to "aquatic" park.

Butterfly expert Art Shapiro, distinguished professor of evolution and ecology at the University of California, Davis, told us this morning that  he's had "oodles of communication about this. None of the Bay Area butterfly people seems aware of any previous roosting there. They are also roosting at Rob Hill in the San Francisco Presidio for the first time since, I am told, 1997. Roosts that far north are often abandoned if the weather turns foul; we'll see if they persist."

Shapiro has monitored the butterfly populations of central California for more than four decades and posts research information on his website.

Elaine Miller Bond quoted Shapiro in a Nov. 23rd piece she wrote and illustrated about the Berkeley monarchs in the Berkeleyside, "Berkeley's independent news site."

Shapiro told her: “2015 has been the biggest monarch year in northern and central California in at least a decade,” says Distinguished Professor Arthur M. Shapiro from the Department of Evolution and Ecology, College of Biological Sciences at UC Davis. "And the pattern of breeding returned to the historic one seen in the 1970s-80s.”

On his website, Shapiro says this, in part, about monarchs:

"The Monarch overwinters on the central coast and moves inland, typically in early March. It moves around a great deal, so that it is unusual to see two successive generations in the same location. Females appear to avoid ovipositing on milkweeds already attacked by the oleander aphid (Aphis nerii) or the bright blue-green beetle Chrysochus cobaltinus. The Monarch acquires protective chemicals (cardenolides, "cardiac glycosides") from its host plants. Because different milkweeds differ greatly in their cardenolide content, Monarchs do also. Our commonest milkweeds (Asclepias fascicularis and A. speciosa) are low in cardenolides and produce innocuous butterflies; some relatively rare species, like the serpentine-endemic A. solanoana, are very nasty. The chemical defense is the basis for the famous mimicry by the Viceroy (Limenitis archippus) and other insects, but the Monarch has no mimics here. Population numbers vary greatly, probably reflecting disease; the locations where summer breeding occurs also vary greatly, and some years are mostly east of the Sierran crest. The westward migration begins as early as late July or August, but some breeding occurs well into autumn and adults continue to emerge at Sierra Valley into October. They then have a very short time to get over the mountains before the weather turns hostile. Altogether, there are three to four generations in an average year, but the mobility of the butterflies makes it difficult to pin this down."

The monarch belongs to the family Nymphalidae, also known as the brushfoot family.

"With about 6000 species worldwide, the morphological diversity within the brushfoots is immense," Shapiro writes on his website. "There have been decades of debates about how to classify the group and what traits are important and useful. For our purposes, the uniting characteristic of the brushfoots is the reduction of the front pair of legs into small, brush-like appendages that serve no real function, rather like the human appendix or tailbone. As a result, while they still have 3 pairs of legs (an insect characteristic), only two of those leg pairs are actually functional. Brushfoots are some of our largest and recognizable butterflies, including the monarch (Danaus plexippus), painted lady (Vanessa cardui), California tortoiseshell (Nymphalis californica), and mourning cloak (Nymphalis antiopa)."

Meanwhile, the monarchs, aka "brushfoots," are roosting at the 14th hole of the disc golf course in the Berkeley Aquatic Park.

How long they'll be there is anyone's guess. Did anyone say "El Nino"? 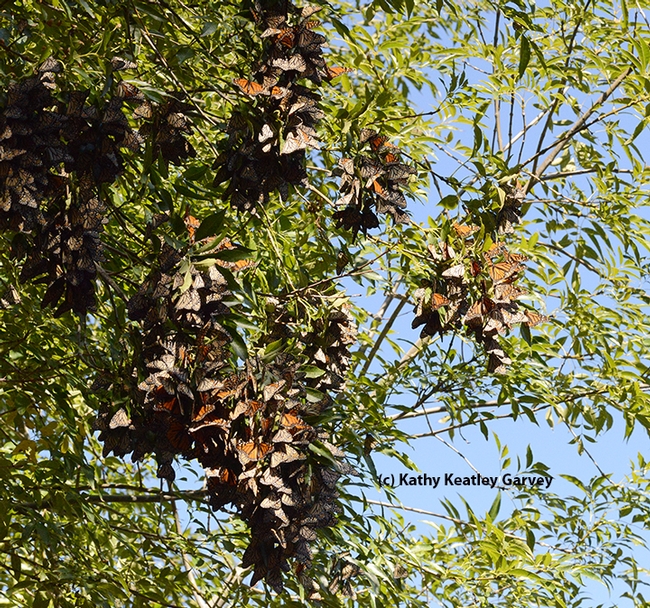 Roosting monarchs at the Berkeley Aquatic Park look like dried leaves, as one observer said. (Photo by Kathy Keatley Garvey) 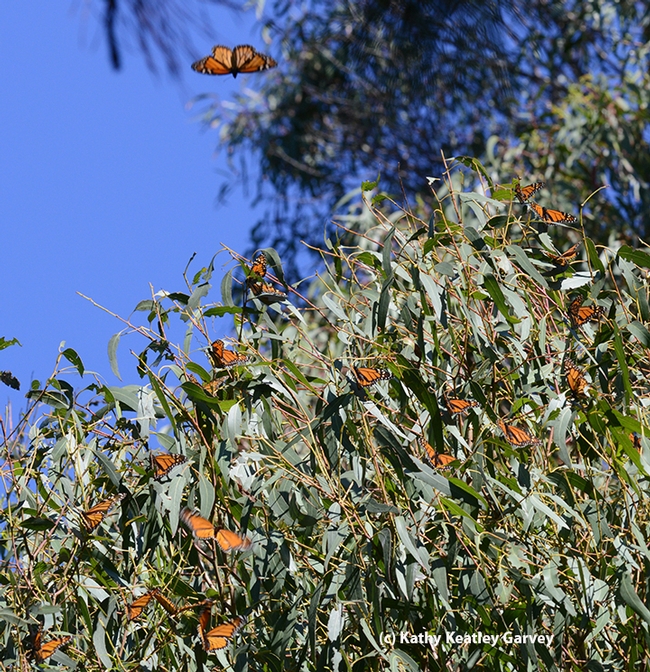 Monarchs roosting in the ash tree fly over to the adjacent eucalyptus tree as the sun warms them. (Photo by Kathy Keatley Garvey) 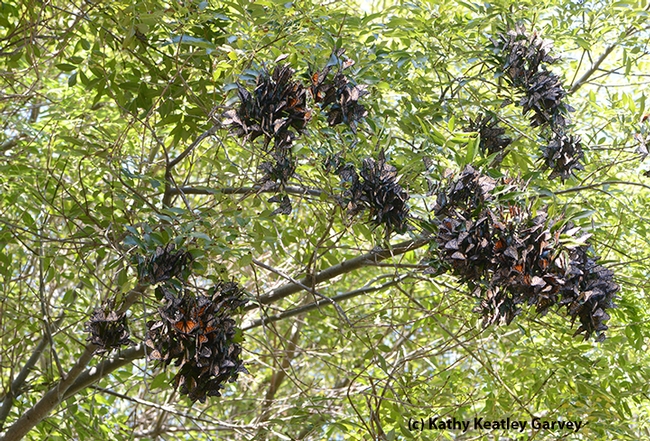 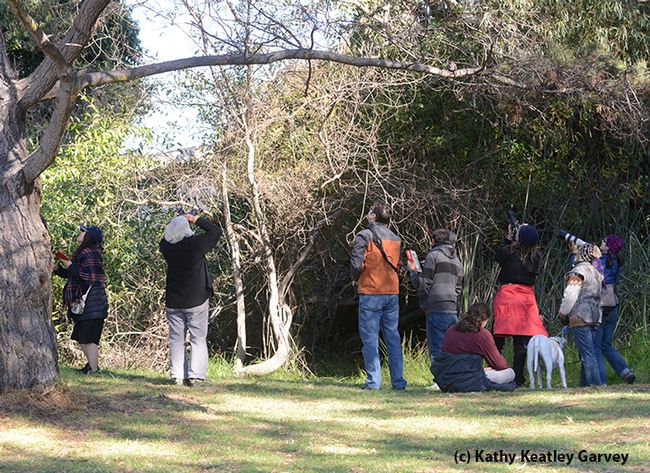 Butterfly aficionadas, photographers and passersby---along with dogs--gather to check out the monarchs. (Photo by Kathy Keatley Garvey) 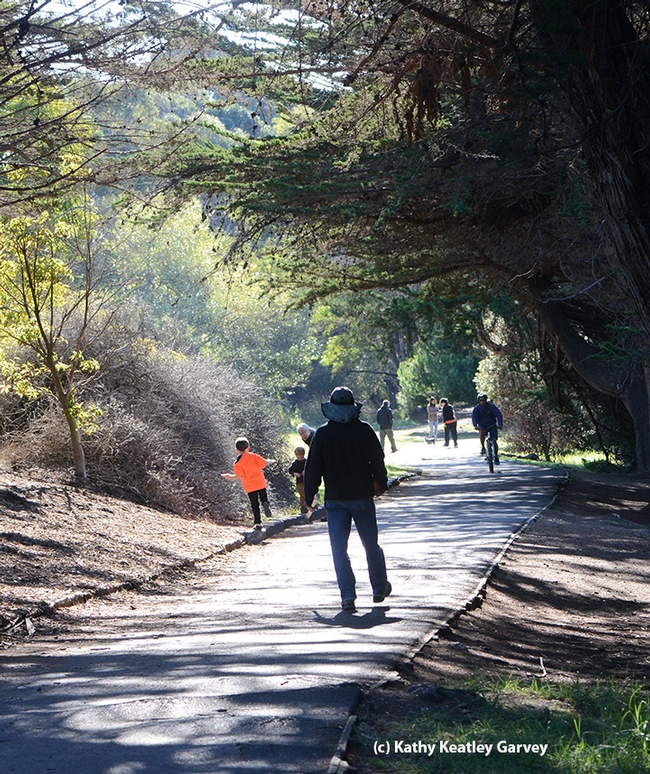