Ralph Washington Jr., captain
The event, a sort of "Insect Star Wars," took place at ESA's recent meeting in Minneapolis. What are the Linnaean Games? They are a fun, college-bowl type competition in which teams answer questions about insects and entomologists. The teams usually hold practice sessions throughout the year.

The UC Davis championship team was comprised of Ralph Washington Jr.  and members Jessica Gillung, Brendon Boudinot and Ziad Khouri. All are graduate students in the UC Davis Department of Entomology and Nematology. They earlier won the Linnaean Games competition at the regional level: the Pacific Branch of ESA.

Here are some of the questions that the UC Davis team correctly answered:

Toss-Up Question: What is the smallest insect that is not a parasite or parasitoid?

Answer: Beetles in the family Ptiliidae.

Bonus Question: Some species of mosquitoes lay eggs that can undergo diapause or aestivation. Give at least three cues that trigger the aquatic eggs to hatch.

Toss-Up Question: A Gilson's gland can be found in what insect order?

Toss-Up Question: Certain Chrysomelid larvae carry their feces as a defensive shield. To what subfamily do these beetles belong?

Answer: Muscalure, Z-9-Tricosene. It is also one of the chemicals released by bees during the waggle dance.

Bonus Question: Cecidomyiidae are known as the gall flies. What is unique about the species Mayetiola destructor, and what is its common name?

Answer: Mayetiola destructor is the Hessian Fly, a tremendous pest of wheat. It does not form galls.

Toss-Up Question: Nicrophorus americanus is listed under what legislative act?

Toss-Up Question: In what insect order would you find hemelytra?

Toss-Up Question: The subimago stage is characteristic of what insect order?

Bonus Question: A 2006 Science article by Glenner et al. on the origin of insects summarized evidence that Hexapods are nothing more than land-dwelling crustaceans, which is to say that the former group Crustacea is paraphyletic with respect to the Hexapoda. What hierarchical name has been used to refer to this clade?

Toss-Up Question: What are the three primary conditions that define eusociality?

The UC Davis Linnaean Games Team won the championship--they're the stars--but congratulations to all! It's a honor to be selected on a team and an honor to win a spot at the regionals and advance to the nationals. 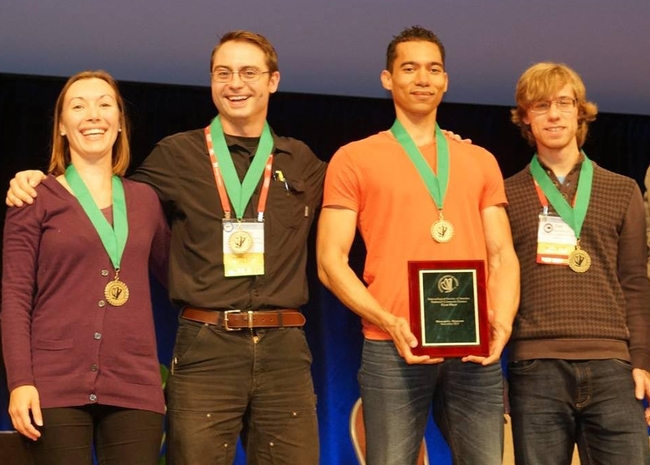