It was a bee. One little bee.

What are the odds of a honey bee landing on the window of a  UC Davis vehicle parked outside the California Bee Breeders' Association meeting on a cool January day--Wednesday, Jan. 20--at the Ord Bend Community Center, Glenn County?

There were no pollinators in sight.

Except for this one little bee, which landed on the windshield. Was it looking for those scarce floral resources? Or soaking in the warmth of the sun? Or waiting to be photographed?

Surely it will be involved in the almond pollination season which begins around Feb. 14.

"There are now 890,000 bearing acres of almonds!" bee breeder Jackie Park-Burris of Jackie Park-Burris Queens, Palo Cedro, and a past chairman of the California Sate Apiary Board, told us last week. "They're needing approximately 1,780,000 hives! That is probably close to 85 percent of the commercial hives in the U.S. It is definitely 100 percent of the quality commercial hives in the United States."

"Beekeepers are very thankful for the job," she added. "The pollen from the almonds is one of the healthiest pollens my bees get all year, they love it!The largest pollinating event in the world happens in California during the almond bloom. It is a $5.8 billion crop for growers and the economy of California."

And it all starts with the bees. One. Little. Bee. 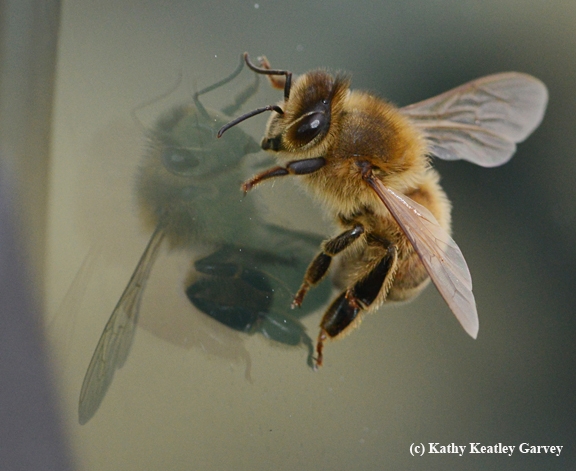