Bug Squad
sitenum=63
Happenings in the insect world
Waist Not, Want Not

A buggy thing happened on the way to a meeting.

As we left Briggs Hall, a three-story building on the UC Davis campus that houses the Department of Entomology, we noticed a wasp at our feet.

Entomologists warn against collecting biting and stinging insects, such as wasps, without dispatching them first. (Dispatching has nothing to do with a postal shipment or a completed transaction.)

This one, a yellow-legged paper wasp, wasn’t moving very fast, so I latched onto the opportunity to photograph him, not...ahem...dispatch him.

Him? Yes. Robbin Thorp, emeritus professor of entomology at UC Davis, later identified it as a male Mischocyttarus flavitarsis, aka yellow-legged paper wasp.

If you’ve ever seen a Mischocyttarus flavitarsis close-up, you’ll notice one thing right away: a “wasp waist.” That brings to mind the 19th century fashion of women achieving the "wasp waist" by corseting and girdling their already slender waists.

The golden-legged paper wasp comes by it naturally. No corsets. No girdle. And always quite fashionable.

We photographed him in all his waspiness and he proved quite cooperative. Later we fed him a taste of honey for one last shot. But off he flew. He buzzed my head once as if to warn "Don't you ever, ever do this again!" and he was gone.

Yellow legs and wasp waist and all. 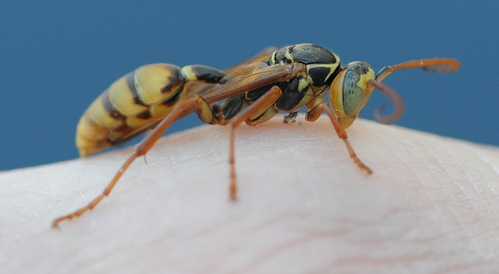 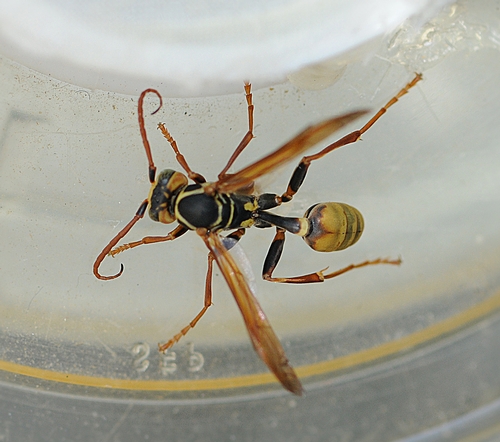 Wasp Waist
WASP WAIST of a male Mischocyttarus flavitarsis, aka yellow-legged wasp. Note the wings moving; he is crawling inside a jar. (Photo by Kathy Keatley Garvey) 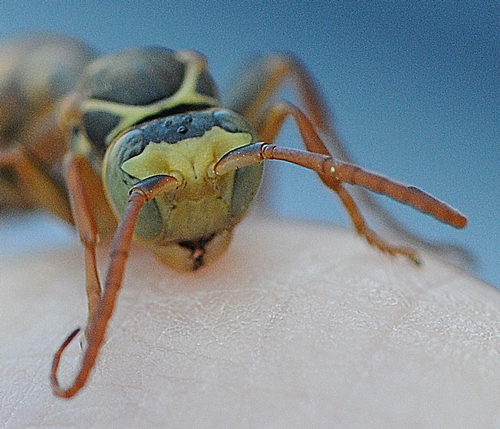 Close-Up
MALE yellow-legged wasp moves toward the photographer. (Photo by Kathy Keatley Garvey)
Tags: Mischocyttarus flavitarsis (1), yellow-legged wasp (1)
Comments: 1
Comments:
by Stefan Robert
on October 21, 2021 at 1:27 AM
I have been checking out some of your stories and it's pretty clever stuff. Thank you
Leave a Reply: