A curly haired tarantula at the Bohart Museum of Entomology at UC Davis could have been named for...drum roll..Shirley Temple.

The curly haired tarantula, or Brachypelma albopilosum, proved a big hit at the Bohart Museum on Saturday, Feb. 13 during the campuswide UC Davis Biodiversity Museum Day. Graduate student Ziad Khouri, who is studying for his doctorate with Lynn Kimsey, director of the Bohart Museum and professor of entomology at UC Davis, intrigued visitors with the spider.

It's native to Costa Rica and Honduras. And like other members of Brachypelma, it's a CITES listed species. That means it's on the Convention on International Trade in Endangered Species (CITES), and under international restrictions for quotas and trade permits.

Khouri noted that in the past, it was overharvested for the pet trade, although the current availability of captive bred specimens has decreased pressure on wild populations. Nevertheless, habitat loss and destruction continue to threaten he curly hair tarantula and many other species.

Tarantulas were in the news this week when scientists revealed that they named a newly discovered tarantula found on the Folsom Prison grounds after singer/songwriter Johnny Cash, the legendary "Man in Black." Its scientific name?  "Aphonopelma johnnycashi."

The announcement was part of a newly released study by biologists Chris Hamilton and Jason Bond of Auburn University and Brent Hendrixson of Millsaps College involving nearly 3,000 tarantulas from across the American Southwest. Fellow scientists describe their 340-page study as "unequivocally the most important work on tarantulas ever done."

That brings to mind the Johnny Cash song, "Folsom Prison Blues" in which he lamented  "I ain't seen the sunshine since I don't know when."

Wonder if "The Man in Black" ever saw "The Critter in Black," now his namesake Aphonopelma johnnycashi. 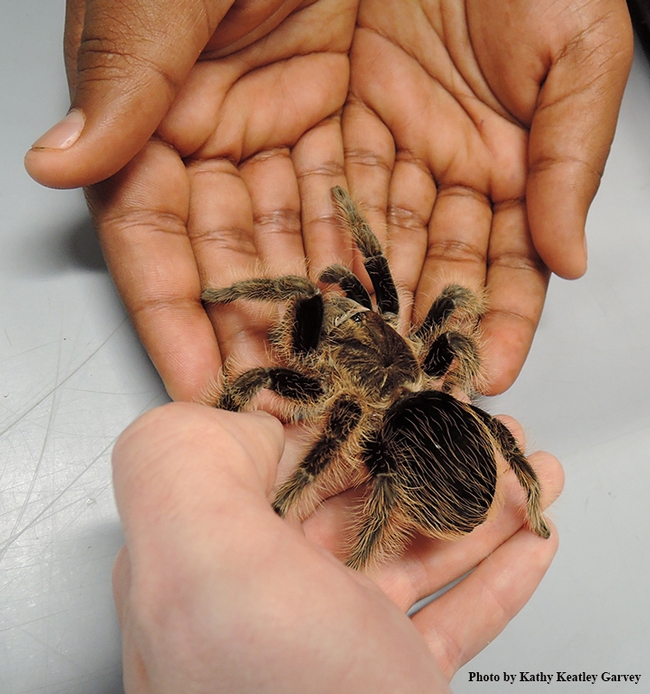 Exchanging a curly haired tarantula at the Bohart Museum of Entomology. (Photo by Kathy Keatley Garvey) 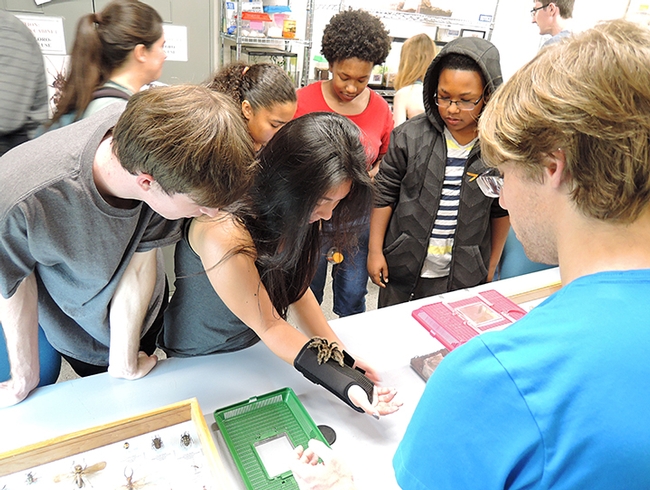