You're microscopic but you're nearly indestructible. You can survive being heated to 304 degrees Fahrenheit or being chilled for days at -328 F. And if you're frozen for 30 years, you can still reproduce.

The water bear "has to be one of the most peculiar and indestructible groups of animals known," writes Lynn Kimsey, director of the Bohart Museum of Entomology and professor of entomology at UC Davis, in her current Bohart Museum Society newsletter.

They belong to their own phyllum, the Tardigrada, and "today they are thought to be most closely related to arthropods and velvet worms (Onychophora)...although for many years, tardigrades were thought to be related to nematode worms because of the structure of the mouth."

To date, there are some 1,500 described species throughout the world.

"Tardigrades can survive high pressures of more than 1,200 atmospheres found in the bottom of the abyss," she points out. "They can tolerate 1,000 times more ionizing radiation than other animals."

Kimsey doesn't have to go far to see or study tardigrades. The Bohart Museum houses one of the largest collections of tardigrades in the world, with about 25,00o slide-mounted specimens. She and and collaborator Carl Johannsen work on a National Science Foundation grant "to database and conserve" the collection.

"This collection is the result of years of collecting, mounting, imaging, and identifying by former collection manager Bob Schuster and emeritus professor Al Grigarick and their collaborators," she says. Lynn Kimsey, director of Bohart Museum of Entomology and professor of entomology at UC Davis. (Photo by Kathy Keatley Garvey)

What's the water bear look like? It has a barrel-shaped body, eight pudgy legs, and the adults range from 0.3 to 0.5 mm in length, but the largest is...ready for this...only 1.2 mm long.

Five segments make up the body, including the head. "The last four body segments each has a pair of legs," Kimsey says. "Their legs are short and wide, lack joints and end in our to eight claws.'

Definitely not your average teddy bear.

Where are they found? They're easiest to find on lichens and mosses,Kimsey says, but they can also be found on beaches, in thesubtidal zone, freshwater sediments, soil, hot springs and even on barnacles," the professor says. They've been found "high in the Himalayas to down in the deep sea." They've even been found in the interior of Antarctica.

What do they eat? Most feed on plants or bacteria "but some are predators on smaller tardigrades."

How do they eat? They use the stylets in their tubular mouth (snout) to pierce "individual plant or bacterial ells or small invertebrates."

The New York Times published a piece on the unique water bear in its Feb. 22 edition: Even 30 Years of Deep Freeze Can't Stop the ‘Water Bear'

Reporter Cathy Gulli described a tardigrade and a tardigrade egg surviving after being frozen for 30 years. Scientists recently published that work in the journal Cryobiology. It was featured in EurekAlert.

"The tardigrade and egg were retrieved from frozen moss in Antarctica in November 1983, and remained in a state of 'cryptobiosis'—in which metabolic activity is temporarily shut down—until May 2014," Gulli wrote.  Then the researchers defrosted and rehydrated the moss. The adult survived and it promptly laid 19 eggs and most of those eggs hatched.  The frozen egg also survived and as an adult, laid 15 and about half survived. See video on EurekAlert.

How can they survive such extreme temperatures?

Kimsey relates that Thomas Brooby, writing in the Publications of the National Academy of Sciences, suggested that one of the reasons may be due to "horizontal gene transfer," that they acquire foreign genes.  About one-sixth of the tardigrade genes were acquired from other organisms, such as bacteria.

And the origin of the tardigrades (some of which have been found in the interior of the Antarctica continent and may have been cryptobiotic for thousands of years)?

"Carl and I have differing opinions on the origins of tardigrades," Kimsey mused. "I think they originated on Mars. Carl thinks Alpha Centauri is more likely. I'm not sure he's not right."

(Editor's Note: Stuffed animals representing the water bears are available for sale in the Bohart Museum gift shop. The Bohart Museum Society newsletter is distributed to members. A limited number of copies is available at the Bohart Museum, located in Room 1124 of the Academy Surge Building on Crocker Lane, UC Davis campus.) 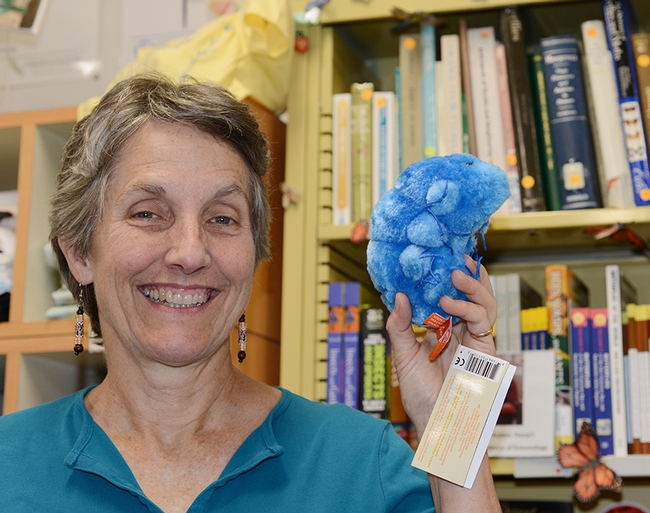 Lynn Kimsey, director of the Bohart Museum of Entomology, shows a stuffed animal, a tardigrade, available in the Bohart Museum gift shop. (Photo by Kathy Keatley Garvey)
Tags: Hypsibius dujardini (1), Lynn Kimsey (346), moss piglet (1), tardigrade (3), water bear (1)
Comments: 1
Comments:
by Sujai Kumar
on March 8, 2016 at 12:18 AM
Dear Kathy and Lynn - the 1/6th foreign DNA story is an artifact of bacterial contamination as shown by two separate re-analyses of the tardigrade DNA data (the real number is closer to 1% horizontal gene transfer or HGT, which is not unusual for animal genomes).
https://doi.org/10.1101/033464 No evidence for extensive horizontal gene transfer in the genome of the tardigrade Hypsibius dujardini
https://doi.org/10.7287/peerj.preprints.1695v1 Identifying contamination with advanced visualization and analysis practices: metagenomic approaches for eukaryotic genome assemblies
Regards,
Sujai (Disclaimer - I'm an author on the first paper)
Leave a Reply: