Matthew Thomas
What's the most dangerous animal on the planet?

It's an insect, the blood-sucking mosquito. Mosquitoes that transmit malaria, including Anopheles gambiae, kill more than people than any other animal on the planet.

"About 3.2 billion people--nearly half of the world's population--are at risk of malaria," according to the World Health Organization. "In 2015, there were roughly 214 million malaria cases and an estimated 438,000 malaria deaths."

You'll learn more about mosquitoes and malaria, plus other pests and diseases, at the free public lecture on Thursday morning, April 7 in the Walter A. Buehler Alumni and Visiotr Center, UC Davis.

Noted medical entomologist Matthew Thomas of Pennsylvania State University will speak on “Ecology and Control of Pests and Diseases: from Biblical Plaques to the Most Dangerous Animal on the Planet” at 10:45 a.m. in the Alpha Gamma Rho (AGR) Hall. The talk is sponsored by the College of Agricultural and Environmental Sciences and the Storer Life Sciences Endowment of UC Davis.

At Penn State, Thomas serves as the Huck Scholar in Ecological Entomology and directs the Ecology Institute, in addition to his duties as a professor of entomology in the Department of Entomology and Centre for Infectious Disease Dynamics.

He will be introduced by Professor Shirley Luckhart of the UC Davis Department of Medical Microbiology and Immunology, coordinator of the event.

Thomas researches many aspects of the ecology and evolution of insect pests and diseases in his drive to understand the consequences of global change and to improve the effectiveness and sustainability of pest and disease management. His work involves predicting and understanding the impact of invasive species, and researching biodiversity and ecosystem health, plus many aspects of biological control.

Last December Thomas and his research team at Penn State, in collaboration with partners in Europe and Africa, received a five-year, $10.2 million grant from the Bill and Melinda Gates Foundation to investigate a new method for preventing the transmission of malaria.

“The method involves limiting mosquito access to houses by blocking openings and installing ‘eave tubes' that contain a unique type of insecticide-laced mosquito netting developed by Dutch partner In2Care that kills the insects as they attempt to enter,” according to a Penn State news release.

Thomas was quoted as saying: “Nearly half of the world's population is at risk of contracting malaria, and according to the most recent World Health Organization report, an estimated 438,000 people died from the disease in 2015. The use of insecticides to control mosquitoes has saved millions of lives, but this tactic is increasingly challenged because mosquitoes quickly evolve resistance to the very limited number of insecticides currently used in public health. The eave tube approach presents a novel strategy to help combat this challenge by simultaneously making houses more mosquito proof and providing a novel way of delivering insecticides, which creates opportunities for using a wider range of insecticidal products."

"The small amount of insecticide used in the tubes means that it is cheap to treat an entire house," said Thomas. "Furthermore, retreatment is easy, as it requires simple replacement of small pieces of netting within the tubes."

Internationally recognized, Thomas is a recipient of the Commonwealth Scientific and Industrial Research Organization (CSIRO) Medal for Research Achievement, is a fellow of the American Association for the Advancement of Science, and an honorary professor at the University of Witwsatersand, South Africa. He also received Penn State's Alex and Jessie Black Award for Research Excellence 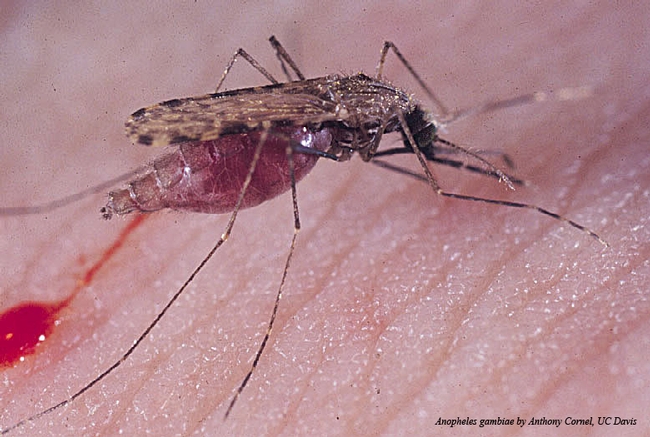 Malaria mosquito, Anopheles gambiae, by medical entomologist Anthony Cornel, UC Davis
Tags: Alumni Center (1), Matthew Thomas (1), mosquitoes (23), public lecture (1), Shirley Luckhart (14)
Comments: 1
Comments:
by Royal Fabrics
on July 13, 2017 at 5:16 AM
Malaria is one the dangerous diseases which might lead you to the termination of your life. Fix mosquito net for windows and doors. Apply repellent cream. Avoid drinking beer. Because beer is the one of the attractive things for those blood-sucking mosquitoes.
Leave a Reply: