Bruce Hammock
What an honor! And so deserving.

He's an entomologist, trained to find ways to control insect pests, but now he aims to help humans with medical issues, including diabetes, high blood pressure and depression.

The average person on the street probably has no clue what eicosanoids are. Well, as Hammock explains: "Eicosanoids are a particular class of fats that, rather than being nutritional or structural, are regulatory.  They regulate blood pressure, childbirth, pain, inflammation, tissue repair and other biologies.  By mass, more than 75 percent of the world's medications work on the eicosanoid pathway.  These include such familiar drugs as aspirin, Advil, Ibuprofin and Motrin."

Hammock, who holds a joint appointment with the UC Davis Department of Entomology and Nematology and the UC Davis Comprehensive Cancer Center, received the award during the International Winder Eicosanoid (WEC) Conference, March 13-16 in Baltimore, Md. He delivered the McGiff Memorial Lecture on “Epoxide Hydrolase Inhibitors as Biochemical Probes and Drug Candidates.”

“The current drugs that alter the eicosanoid pathways block the formation of drugs that block natural fats that increase hypertension, increase pain and increase inflammation,” Hammock explained. “We have been working on a third branch of the pathway that reduces blood pressure, inflammation and pain.  By blocking the degradation of these natural molecules we block harmful biologies.  These new drugs are promising for control of diabetes, hypertension and other diseases.  We are working to move some of these compounds that work outside of the brain to the clinic for both man and companion animals to control inflammatory and chronic pain.”

"However, we found that some of our compounds reach the brain where they can reduce complications from stroke and convulsions, including those from epilepsy. Based on these brain-penetrating compounds, Kenji Hashimoto's lab at the Chiba University Center for Forensic Mental Health, Japan, found that they are promising for depression, bipolar disorders and some other central nervous system effects.  These compounds have proven valuable to numerous investigators to understand disease biology and are being followed by several drug companies.”

Using the newly discovered chemical in the Hammock lab, the UC Davis and Hashimoto researchers drew international attention on March 14 for their publication in the Proceedings of the National Academy of Sciences (PNAS). The result could be a new, innovative tool to control depression, a severe and chronic disease that affects 350 million persons worldwide, they said.

“The research in animal models of depression suggests that sEH plays a key role in modulating inflammation, which is involved in depression,” according to the UC Davis-issued news release. “Inhibitors of sEH protect natural lipids in the brain that reduce inflammation, and neuropathic pain. Thus, these inhibitors could be potential therapeutic drugs for depression.”

WEC is a group of scientists who have high standards of research, but freely collaborate and exchange reagents and ideas. It represents science at its best. "Never would we have made the advances we have at Davis without this friendship and collaboration of scientists from around the world,” Hammock said.  This year's conference drew 150 scientists.

Bruce Hammock, who received his doctorate in entomology/toxicology from UC Berkeley in 1973, joined the UC Davis entomology faculty in 1980. With Sarjeet Gill (now at UC Riverside) he discovered that the enzyme, soluble epoxide hydrolase (sEH), degrades fatty acid epoxides and plays an important role in human diseases. He and his lab have developed inhibitors of  sEH that are anti-inflammatory, anti-hypertensive, analgesic and organ-protective. Recently he founded the company, Eicosis LLC,  to target diabetic neuropathic pain. The company just received two large federal grants for translational drug development and aims to move one of the sEH inhibitors to human clinical trials.

The Hammock lab is the 30-year home of the UC Davis/NIEHS Superfund Research and Training Program, an interdisciplinary program funded by the National Institute of Environmental Sciences (NIEHS) that has brought in almost $60 million to the UC Davis campus. The Hammock lab is also the home of the NIH Training Grant in Biomolecular Technology.  The lab alumni, totaling more than 100 graduates, hold positions of distinction in academia, industry and government as well as over 300 postdoctorals.

The UC Davis distinguished professor has authored or co-authored more than 1020 peer-reviewed  publications, many in top journals. This includes 500 related to epoxide hydrolase, 80 related to esterase and amidase, more than 260 related to immunoassay, and 240 related to insect biology.

And yes, he's an entomologist. He's a fellow of the Entomological Society of America (ESA) and recipient of the ESA's Recognition Award for Insect Physiology, Biochemistry and Toxicology. 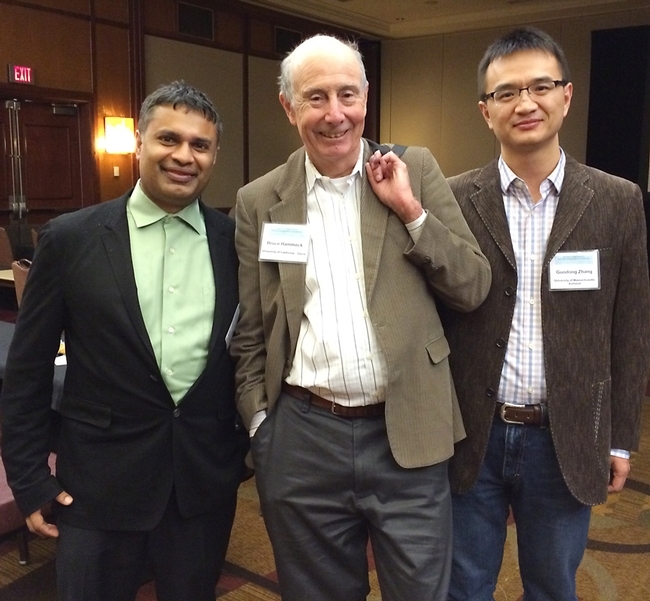