Stephanie Kurniawan is studying Anopheles freeborni mosquitoes from Sutter and Butte County rice fields. (Photo by Kathy Keatley Garvey)
Sandy Olkowski, Stephanie Kurniawan and Maribel "Mimi"  Portilla are three graduate students at the University of California, Davis, who have a lot in common.

They're all heavily involved in mosquito research and each won a Bill Hazeltine Student Research Award, presented annually by the Hazeltine family.

And they all have stories to tell.

Kurniawan went on to receive her degree in animal biology with a minor in medical and veterinary entomology at UC Davis.

Sandy Olkowski is working on her doctorate in entomology, studying with medical entomologist Thomas Scott, emeritus professor of entomology.

Maribel "Mimi" Portilla has her master's degree in public health. “As many scientists, I am a very curious person, intrigued by multifaceted questions about the world around me,” Portilla said. “ As an undergraduate at Santa Clara University, I quickly found my calling to the sciences, and I double-majored in Biology, with an emphasis in ecology and evolution, and combined health sciences. However, I often found myself wondering how I could take my new knowledge and apply it in a way that would be beneficial to others. Completing a minor in sociology at SCU became pivotal in my search for a graduate program. I found that public health incorporated my love for biology and my growing interest in social issues. At UC Berkeley School of Public Health, I was able to study health and disease within a larger context, and how to consider the biology and the social determinants of disease."

"After completing my master's in public health with an emphasis in infectious diseases and vaccinology, I realized I really missed the research experiences I had as an undergraduate, and so I looked for a way to bridge my new-found passion for Public Health and basic science research. This led me to UC Davis, where I am now pursuing a Ph.D in medical entomology. At UC Davis I learned about One Health, which states that the health of people, the environment, and animals is closely intertwined, and a seamless interaction between disciplines is critical for the health of all. Medical entomology is inherently a prefect field in which to ask questions about how the interactions between humans and animals impact health."

"Within One Health theory, I am particularly interested in how people manipulate the environment in ways that change the risk of disease by arthropod vectors, such as mosquitoes," Portilla said. "Although environmental manipulation is a classic mosquito control technique, indirect effects of managing other concerns, such as invasive weeds, is not well understood. I am focusing on how the management practices of the invasive exotic weeds, Brazilian waterweed (Egeria densa) and water hyacinth (Eichhornia crassipes), in the Sacramento-San Joaquin Delta impact mosquitoes and their habitat. My goal is to better understand the ecology of these management practices in order to inform and create better techniques to reduce both mosquito and weed problems.”

“Due to my diverse interests and skill set, I am very open about my career choices. I have extensive teaching experience, and would love to be a professor with both teaching and research opportunities. However, there are many work opportunities beyond academia. My research is introducing me to many government organizations, such as Vector Control districts, who are doing important work and research to keep people safe and healthy. I hope to continue developing a strong research skill set while at UC Davis, and find a career path which takes advantage of my diverse abilities and love for One Health and Public Health. “

William Emery Hazeltine II (1926-1994), for whom the Bill Hazeltine Student Research Award is named, worked tirelessly in mosquito research. He managed the Butte County Mosquito Abatement District, Oroville, from 1966 to 1992. He was an ardent supporter of the judicious use of public health pesticides to protect public health.

Two of his sons actively support the memorial fund: Craig of Scottsdale and Lee of Woodland. A third son, Jeff of Los Angeles, supported the memorial award until his death in March 2013. 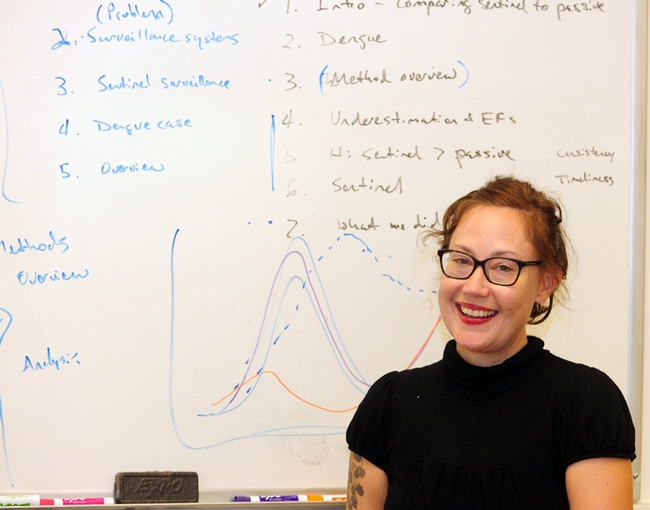 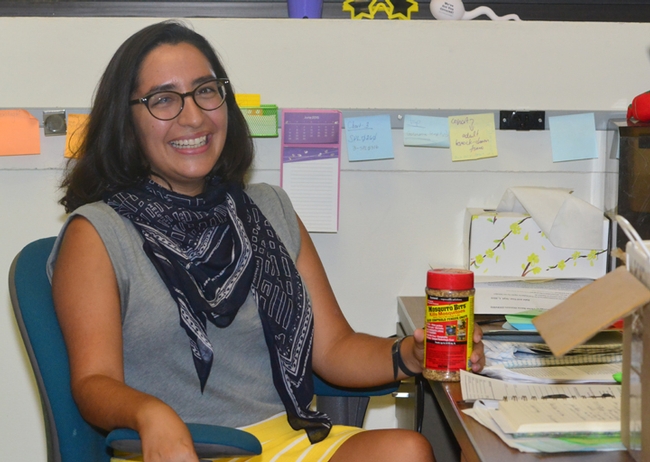 Maribel "Mimi" Portilla is "interested in how people manipulate the environment in ways that change the risk of disease by arthropod vectors, such as mosquitoes." (Photo by Kathy Keatley Garvey) 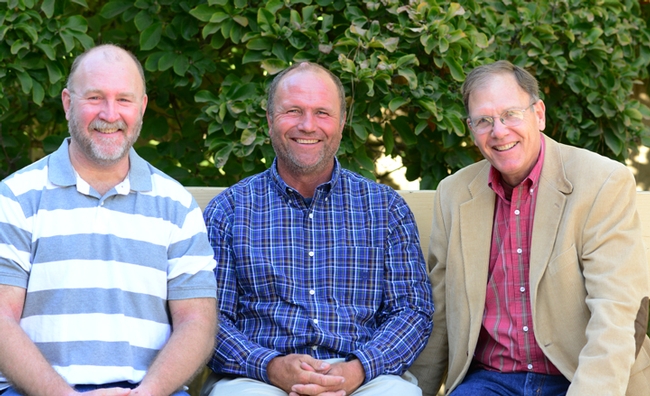