Strong-willed arguments flash rapidly, pointedly and furiously, much like guard bees defending their colony in the fall from would-be robbers.  Just when you think the issue is settled once and for all, the arguments circle again. Non-beekeepers, in particular, gleefully maintain that the sweet mixture you spread on your toast in the morning is "bee vomit." Or they may label that spoonful of honey in your tea as "bee barf."   (It's usually accompanied by "How can you eat THAT?")

So, what's the answer?

We consulted  "honey bee guru" Extension apiculturist emeritus Eric Mussen of the UC Davis Department of Entomology and Nematology, who completed 38 years of service in 2014 to the apiculture industry and the general citizenry of California. (However, as an emeritus, he continues to maintain an office in Briggs Hall and answer questions.)

Then, what is honey?

"To answer that question, we have to define a few important words," Mussen says. "We will use Wikipedia as our source. A honey bee and her honey. (Photo by Kathy Keatley Garvey)
"Here is how these terms relate to honey," Mussen says. "Honey begins as a dilute (5-20 percent) sugar solution that is called nectar, which is sucked up by foraging honey bees as they visit the flowers or extra-floral nectaries of bee-attractive plants. The nectar is pumped through the 'tongue' of the bee into an expandable crop, which in honey bees is called the honey stomach. While in the crop, two salivary enzymes begin the honey-making process. Diastase catalyzes the conversion of starch into maltose. The equivalent enzyme in human saliva is alpha amylase that catalyzes the conversion of starch to maltose and dextrins. A second honey bee enzyme, glucose oxidase, catalyzes the conversion of glucose to hydrogen peroxide and gluconolactone. The hydrogen peroxide prevents microbial growth in the pre-honey solution."

Wait, there's more, and yes,  it gets technical.

"While residing in the crop, a curious, pulsating valve, called the proventriculus in insects, extends curved, rake-like bristles into the crop that filter out particles from the nectar," Mussen points out. "The particles can be moderate in size to quite small, such as a pollen grains or infectious spores of the intestinal parasites Nosema apis and N. ceranae. The size is limited by the diameter of the tubular mouthparts through which all honey bee food must be consumed. Some squash pollens are too large to swallow. Once a number of particles have accumulated, they are passed back (swallowed) into the midgut as a bolus. As the bolus leaves the proventriculus, it is wrapped in a sausage skin-like wrapper called the peritrophic matrix (formerly the peritrophic membrane). Once passed into the midgut inside the peritrophic membrane, there is no way for it to return to the honey stomach."

No way. No way for it to return to the honey stomach.

Mussen says that "the most time-consuming step in converting nectar to honey is the dehydration process, during which the moisture content of the honey is reduced to a fermentation-inhibiting 20 percent or lower. To accomplish this, the nearly particle-free nectar is pumped (regurgitated) out of the crop and suspended as a thin film, hanging directly below the horizontally extended mouthparts. Bees fan the films with their wings to hasten evaporation of water. As the film thickens, it is pumped back into the crop, blended with the remaining nectar, and pumped back out to be dried some more."

So, what happens then?

"When it reaches the appropriate moisture content, the 'ripened' honey is pumped into a comb cell and capped with a beeswax cover. This is the honey that beekeepers provide for us to eat. The color and flavor of the honey depends upon the floral sources from which the nectars were collected. The moisture content of the honey is markedly influenced by the relative humidity of the ambient air surrounding the hive."

So, bottom line is this: Sorry, honey, honey is not bee vomit.

"It never reaches the true digestive tract of a honey bee," Mussen emphasizes. 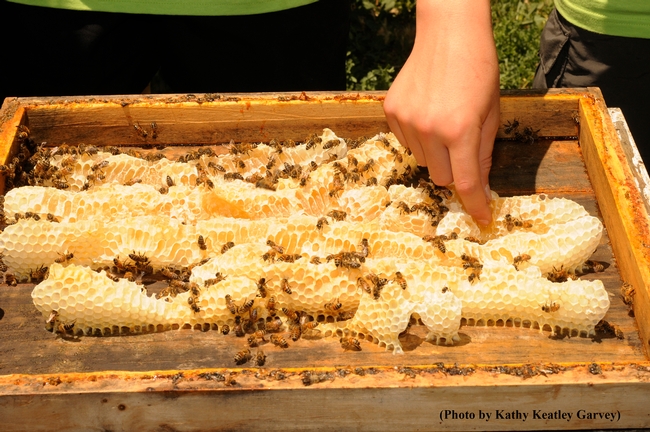 Honey is a special treat fresh off the frame. (Photo by Kathy Keatley Garvey) 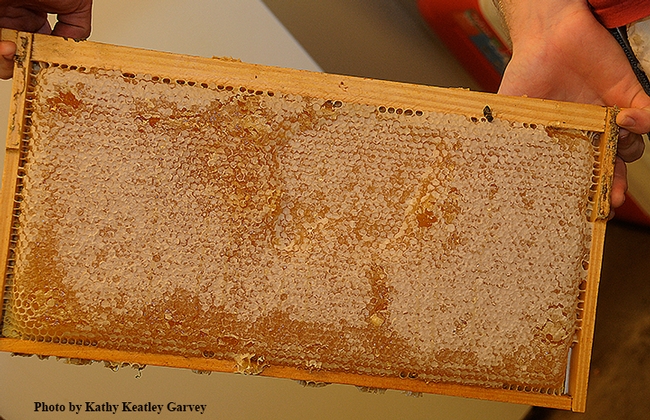