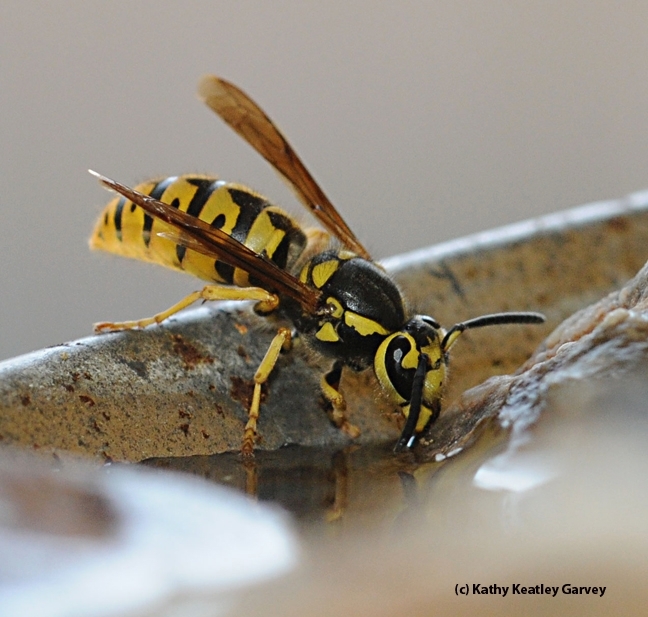 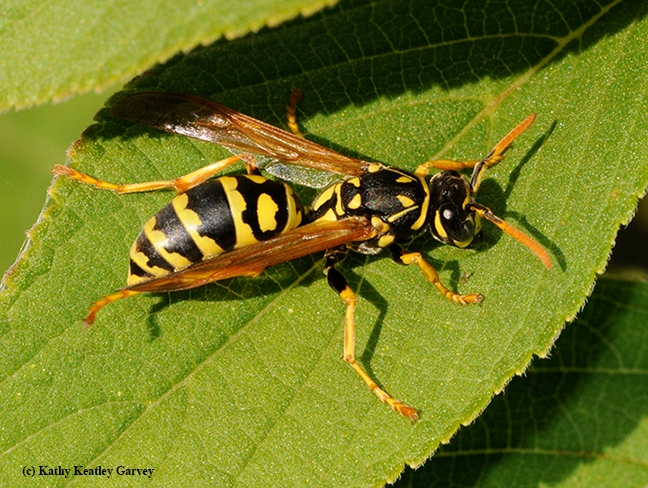 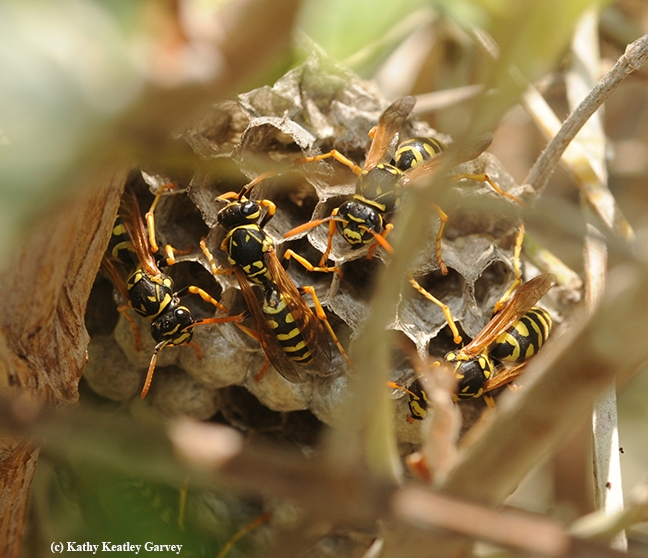 This is a European paper wasp nest tucked inside a shrub. Yellowjacket nests are often in abandoned rodent nests. (Photo by Kathy Keatley Garvey)
Tags: European paper wasp (16), Lynn Kimsey (335), nest (1), Oakland Raiders (1), Polistes dominula (13), San Francisco Giants (1), UC IPM (42), Vespula pensylvanica (8), Western yellowjacket (3)
Comments: 3
Comments:
by Carla Fillippone
on September 3, 2016 at 6:46 AM
Yellowjackets are also a nasty threat to my honey bee hives. As a one-stop shopping source of sugar (honey) and protein (larvae and bees) Yellowjackets recently destroyed 3 of my weaker colonies that were rebuilding after swarming or losing their queens. Entrance reducers and robbing screens on the hives were of no help to deter these intruders. There is no stopping them other than finding and destroying the Yj nest(s) or relocating the hives. I experienced the same Yj assault last year and was to locate the Yj nest with the help of several Vector Control employees. One afternoon we used powder sugar to dust the Yjs and track them through neighboring yards quite a distance from my apiairy. The assault on my bees ended as soon as that Yj nest was destroyed. This year I have yet to locate the Yj nest and the battle continues. The Yjs are relentless.
by Kendall Huddleston
on September 8, 2016 at 5:27 PM
Try using a shallow pan with a small peice of raw liver and blood near the colonies to isolate them. As a pest control company in Tennessee, we haven't had much luck with fipronil against wasps, but we haven't been in in the position to have to try it. Direct feeding of this product (as in Maxforce roach gel or termidor) may make a difference. If not this product, perhaps some similar transfer chemical. The yellow jackets' greed should pay their disaster. Yellow jackets in the United States kill far more humans than all other animals combined each year, Ken.
by Pam Arion
on March 21, 2019 at 1:13 PM
Do yellow jackets have black antennas and paper wasps have yellow antennas?
Leave a Reply: