Medical entomologists Anthony Cornel (foreground) and Greg Lanzaro study malaria mosquitoes and are co-authors of a study published Sept. 15 in PLOS Genetics. This photo shows them on Lake Victoria in Kenya. (Photo by Steve Mulligan)
UC Davis-led research indicates "a genetic component" to the blood-feeding behavior and host choice of a species of malaria mosquito that feeds on both humans and cattle in Tanzania. The research can lead to important control ramifications.

The research, published in the Sept. 15 edition of PLOS Genetics, involved the study of Anopheles arabiensis, in Kilombero Valley in Tanzania. The mosquito is the primary vector of malaria in east Africa. Bradley Main, researcher in the UC Davis Vector Genetics Lab, is the lead author of the paper.
“For example, West Nile virus moves from birds to people; after a mosquito has picked up the virus biting a bird and then bites a person for a subsequent meal,” Lanzaro explained. “Human malaria parasites do not infect livestock so the issue of animal vs. cattle feeding can be important in controlling this disease. Understanding what determines host-choice can have important ramifications on control. Treating cattle with insecticides as a means of killing mosquitoes that come to bite them may have the unintended outcome of ultimately selecting out only individuals that carry genes driving them to bite people. The better we understand the biology of mosquitoes the better we will be able to manage the diseases they transmit.”

The publication is the work of a 13-member international team. Bradley Main, a researcher in the Vector Genetics Lab, is the lead author.

“Whether there is a genetic basis to feeding preferences in mosquitoes has long been debated,” said lead author Bradley Main, a researcher in the Vector Genetics Lab. “Using a population genomics approach, we have established an association between human feeding and a specific chromosomal rearrangement in the major east African malaria vector. This work paves the way for identifying specific genes that affect this critically important trait.”

In their summary, they wrote: “Malaria transmission is driven by the propensity for mosquito vectors to bite people, while its control depends on the tendency of mosquitoes to bite and rest in places where they will come into contact with insecticides. In many parts of Africa, where coverage with Long Lasting Insecticide Treated Nets is high, Anopheles arabiensis is the only remaining malaria vector. We sought to assess the potential for An. arabiensis to adapt its behavior to avoid control measures by investigating the genetic basis for its host choice and resting behavior. Blood fed An. arabiensis were collected resting indoors and outdoors in the Kilombero Valley, Tanzania. We sequenced a total of 48 genomes representing 4 phenotypes (human or cow fed, resting in or outdoors) and tested for genetic associations with each phenotype. Genomic analysis followed up by application of a novel molecular karyotyping assay which revealed a relationship between An. arabiensis that fed on cattle and the standard arrangement of the 3Ra inversion. This is strong support that An. arabiensis blood-feeding behavior has a substantial genetic component. Controlled host choice assays are needed to confirm a direct link between allelic variation within the 3Ra inversion and host preference.”

The publication, "The Genetic Basis of Host Preference and Resting Behavior in the Major African Malaria Vector, Anopheles arabiensis," is online at http://journals.plos.org/plosgenetics/article?id=10.1371/journal.pgen.1006303 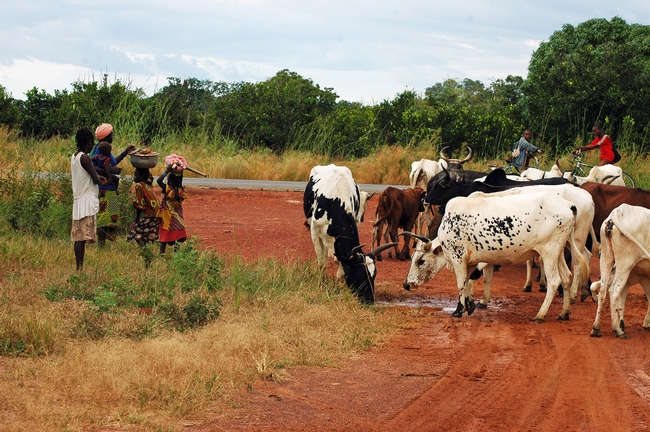