Bug Squad
sitenum=63
Happenings in the insect world
How Much Do You Know About Entomology? Ralph Washington Jr., captain of the UC Davis Linnaean Games Team, with May Berenbaum, president of the Entomological Society of America. (Photo by Chuck Fazio)
“You have just moved into an apartment that has been vacant for weeks but whose prior owners had several cats and dogs. A very few days after you move in you are bitten by a huge number of cat fleas that seem to have appeared out of nowhere. What characteristic behavior of cat fleas biology is probably responsible for this?”

Do you know the answer?

That was one of the questions that the UC Davis Linnaean Games Team answered correctly at the championship finals during the 2016 Linnaean Games, hosted recently by the Entomological Society of America (ESA) in Orlando, Fla.

The UC Davis team of captain Ralph Washington and Brendon Boudinot,  third-year graduate students, and Emily Bick, a second-year graduate student, successfully defended their national title, defeating the University of Georgia (the national champion in 2012), by the score of 145 to 55. The UC Davis entomologists earlier outscored Ohio State University, North Carolina State University (champions in 2014), and Texas A&M in advancing to the finals.

Congratulations, UC Davis! And well done, all other teams!

The ESA Linnaean Games are a lively question-and-answer, college bowl-style competition on entomological facts played between university-sponsored student teams. The teams score points by correctly answering random questions. The winning team receives a trophy cup for the department, and each individual, a plaque. Team members Emily Bick and Brendon Boudinot responding to a question. (Photo by Chuck Fazio)
About the trio: Washington is studying for his doctorate with major professors Steve Nadler and Brian Johnson, who respectively specialize in systematics and evolutionary biology of nematodes and the evolution, behavior, genetics, and health of honey bees; Boudinot with major professor Phil Ward, systematics and evolutionary biology of ants; and Bick, with major professor Christian Nansen. Bick is working on ecosystem models to optimize pest management  in two systems:  invasive aquatic weed species water hyacinth and its biological control agent, Neochetina bruchi; and working to control Lygus bugs using alfalfa as a trap crop in strawberries. UC Davis Extension entomologist Larry Godfrey serves as the team's advisor.

So, what's the answer to the question about pets in the apartment?

“Cat flea pupae eclose in response to the presence of a host.”

Here are some of the other questions that the UC Davis team correctly answered (answers at the end of this blog):

You answered them all correctly, right? 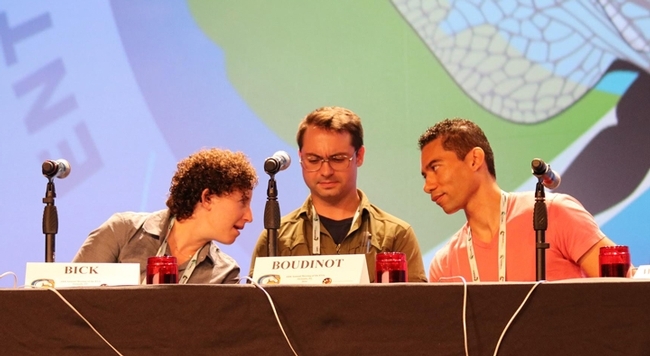