Entomology & Nematology News
sitenum=270
UC News about Entomology and Nematology.
Charley Nye: A Look Inside the Life of the Manager of the Laidlaw Bee Research Facility
Published on: November 17, 2016 As an undergraduate at the University of Illinois, Urbana-Champaign, he enrolled in an introductory entomology class. “I remember seeing the research technician standing in and indoor flight cage, surrounded by bees,” Nye said. “They were flying from the hive to a feeder stand and completely ignoring her. We covered the long history of beekeeping in that class around that same time and I was just amazed at how much knowledge had been collected. I applied for a job and started working as an assistant to the research technician I saw that day that spring. I spent the next three summers working for the lab of Dr. Gene Robinson and learning as much as I could.”

He went on to spend eight years in Illinois working with the bees—three as an undergraduate assistant and five years as the facility manager and research technician. He joined UC Davis in December 2015.

“Adapting to the California ecosystem has been a bit of an adjustment,” Nye said. “A big part of beekeeping is understanding the ecosystem you live in. If you've got a bee yard that doesn't have a water source close, you may need to move water in during dry periods. Different flowers provide nectar and pollen at varying quantities, so being aware of what's going on in the environment can give you some insight into whether or not you might need to assist your bees with some sugar to make it until the next bloom. That has honestly been my favorite part of moving here, learning about all the trees and shrubs and wildflowers and when they bloom. It's a constant process through the year, and being my first year here it's been really enjoyable to watch the seasons progress."

Nye welcomes the worldwide interest in bees and the crucial role they play. “I think people are starting to understand the complex role bees play in our food system, and I hope in the future we could help educate people about how the agricultural system is helped by natural areas,” he said. “Here in the Central Valley, there is very little unused space. We are able to bring in honey bees on trucks from distant areas to pollinate our crops, but it's a very precarious system that we are relying on to make that work. Having some natural corridors for pollinators year round would really help increase the population of native bees, help the health of honey bees, and keep us from worrying about losing the delicate balance we are keeping between honey bees and agricultural production.”

"I think the general public's knowledge of bees has made amazing advances in recent years. The shortage of bees for agricultural purposes here in the Central Valley really brought beekeeping into the news, followed by a lot of documentaries and things that made people want to be beekeepers or at least plant pollinator friendly gardens. Lots of people bring up beekeeping documentaries they've seen, and I don't think beekeepers were experiencing that 20 years ago. Overall, I'm mostly impressed with the amount of bee related knowledge out in the world right now.

Myths and misconceptions about bees? Often people associate bees with stinging, and falsely claim they have an allergy. “I've been doing this long enough that I don't laugh at people when they tell me they are allergic, but I think people don't completely understand what allergic means,” he said. “Only one or two people out of 1000 are actually allergic and have a life threatening reaction--most people just experience pain and swelling. I try to point out to people that when it hurts and makes their hand swell up, that might not mean they have a bee allergy, but most of the time I just nod my head and move on. I worked a booth at a local fair and half my conversations were people telling me they were allergic because it hurt. I get stung every day, and I can attest that at no point does it stop hurting.”

Nye divides his time with the labs of Extension apiculturist Elina Niño, pollination ecologist Neal Williams, and  Brian Johnson, who studies the behavior, evolution and genetics of honey bees.  “My responsibilities are pretty spread out,” he said. “The majority of my time is spent keeping the bees healthy enough for experiments.” In peak season, “it's pretty common to just have a few weeks' notice that we need any number of healthy full sized colonies, and like other animals, you can't grow a calf to a full sized cow with any magic tricks, so we try to buffer that by keeping a tight schedule for disease monitoring and making sure all our colonies are as robust as possible.”

What does he like the best about his job? The least?

"My job has a great balance between working out in a natural setting going through bee hives, and coming back to the lab and getting involved in research," he said. "I think doing either one of them by themselves would get a little tedious for me, so I feel really lucky to be able to split myself between the two. The least? It might be kind of a strange complaint, but foxtails. I spend a lot of time walking through tall grass and those foxtails burrow into my shoes and make me crazy. And I'm told I have to worry about them going up my dog's nose? I would say it's an urban myth but the seeds ability to get into my shoe and under my sock is practically magic."

(Editor's Note: For a list of the 2017 apiculture courses that the Niño lab is offering and teaching, see this page.) 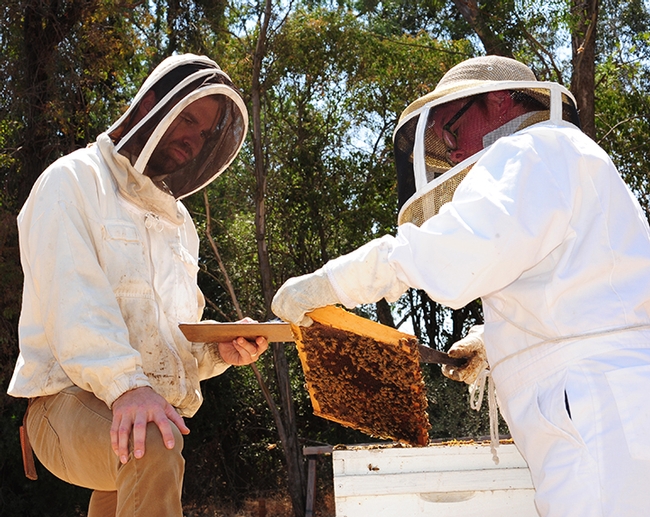 Charley Nye served as one of the proctors during the California Master Beekeeper Program testing. Here he proctors Cheryl Veretto, president of the Sonoma County Beekeepers' Association. (Photo by Kathy Keatley Garvey) 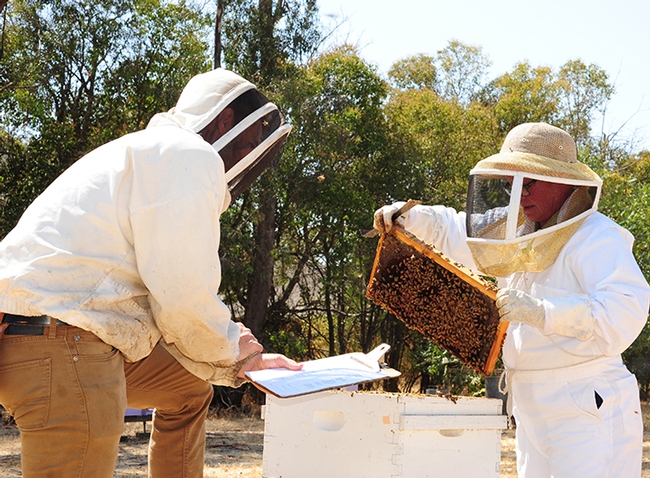 Charley Nye watches as Cheryl Veretto, president of the Sonoma Beekeepers' Association, pulls out a frame during the proctoring session for California Master Beekeeper. (Photo by Kathy Keatley Garvey) 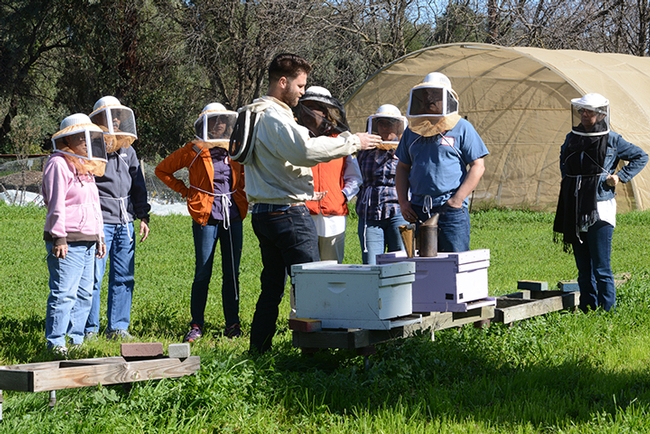