Distinguished professor Bruce Hammock of the UC Davis Department of Entomology and Nematology and UC Davis Comprehensive Cancer Center just shared with us "Bugs: They're What's for Dinner!" (not the bugs, the news story).

The gist of the piece, appearing in a recent edition of the Chemical and Engineering News: Gladys O. Latunde-Dada of King's College, London, found that if you eat crickets, you'll get almost as much iron as eating a sirloin steak. She and her research team studied four common food insects: grasshoppers (Sphenarium purpurascens), crickets (Gryllus bimaculatus), mealworms (Tenebrio molitor), and buffalo worms (Alphitobius diaperinus), a type of beetle larvae. Of the four insects, crickets scored highest for the total iron content--a whopping 12.91 mg/100 g. just shy of  beef sirloin's 15-47 mg/100g.

Crickets and grasshoppers also make for an award-winning cookie. Think "Chocolate Chirp Cookies," the top winner in the UC Davis Department of Entomology and Nematology's holiday cookie contest. They were the work of graduate student Heather Baker, who studies malaria mosquitoes in the lab of molecular biologist Shirley Luckhart.

Oddly enough, no one attending the social mentioned anything about the iron content in the "Chocolate Chirp Cookie."

Or how delicious they were.

Baker's cookie, made with cricket flour and topped with a grasshopper, won the "Most Innovative" category. She received a chef's hat, a $25 gift certificate to UC Davis Stores, and "The Golden Teaspoon Award."

Baker said she based her entry on a Pioneer Woman recipe but added cricket flour instead of "regular" flour. The grasshoppers? "I ordered them through Amazon," she said. Meet cookie baker/skeeter researcher Heather Baker. Hometown: Tacoma, Wash. She's pursuing a master's degree in entomology, with an emphasis in vector-borne disease. "I'm what my friend jokingly calls a fake entomologist--I only really study insects that spread disease," she said. "My current research is in modifying MAP kinase activation in Anopheles stephensi to develop a mosquito that is resistant to malaria, but also fit enough to out-compete and replace wild-type populations.  When I'm done here I hope to teach a medical entomology course at the community college level, and get more young students interested in studying vector-borne diseases."

The eating of insects, entomophagy, common in many countries throughout the world, is gaining momentum in the United States. "I've seen a number of articles touting insects as the 'future of meat,' because they contain a lot of protein and amino acids and are a very sustainable food source," she said. "They require much less water and space than animal farms, and insect farming emits far fewer greenhouse gases.  Unfortunately, companies offering insect-based products are still developing the infrastructure to raise human food grade insects on a large scale, so a lot of these foods are incredibly expensive.  The cricket flour alone costs $40-plus per pound!"

Of the 20 entries at the entomology/nematology social, Baker's cookies were "on the judges' short list in every category" in addition to her winning "Most Innovative," said contest coordinator Guyla Yoak. Thus, the awarding of The Golden Teaspoons...

Unfortunately, most of the "chocolate chirps" went uneaten.

That's not to say the scientists who study bugs don't like bugs. They do. They just don't eat them. Generally.

"Wax moth larvae, when fed honey and baby food are delicious!" Hammock declared. "They taste just like cream of wheat with honey on it." 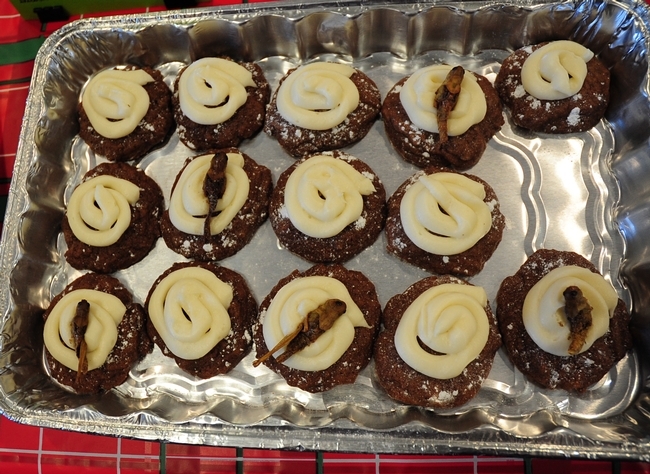 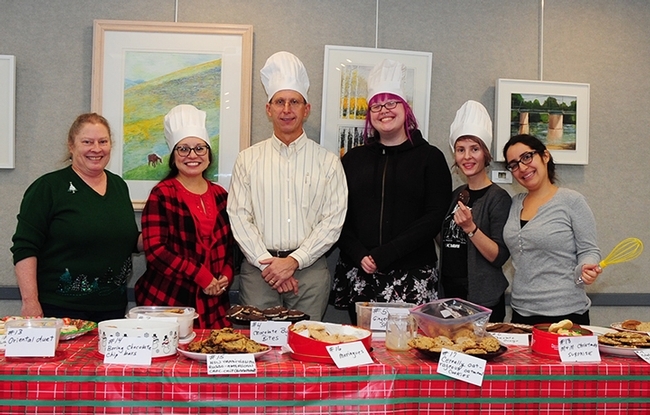