Professor Ting Xu (front) of China Agricultural University and Distinguished Professor Bruce Hammock of UC Davis working in the Hammock lab. (Photo by Kathy Keatley Garvey)
Professor Ting Xu of Beijing, a visiting scholar in the UC Davis lab of distinguished professor Bruce Hammock, has just received a $330,000 grant to develop a new technology--nanobodies--to detect pesticides, industrial contaminants and other chemicals in the environment and in the food.

Xu, professor of agro-ecology at the China Agricultural University (CAU), is on a yearlong sabbatical in the Hammock lab. He received assistance in obtaining the grant from project manager Bruce Hammock and program manager Shirley Gee, now retired, both co-investigators.

“This is a highly competitive program and this grant is a huge honor for Ting and for Shirley Gee,” said Hammock, who holds joint appointments in the UC Davis Department of Entomology and Nematology and the UC Davis Comprehensive Center.

The $330,000 grant, funded by China, is a cooperative agreement between UC Davis and China. “The grant is quite timely, as UC Davis is working to increase scientific exchange with China,” Hammock said. “We have been collaborating with Ting's group for several years on nanobody-based immunoassays to improve human and environmental health.”

Xu described immunoassays as “a rapid, sensitive and cost effective method of analysis for pesticides.” Technically, engineering antibodies “such as a variable domain of heavy chain antibody (VHH) from camelids and a single-chain antibody variable fragment (scFv) from chickens have advantages over monoclonal and polyclonal antibodies in the respect of small size, thermal stability, solubility and easy generation,” Xu explained. “The objectives of this project focus on the production of specific VHHs and scFvs for several pesticides and the development of engineering antibodies based immunoassays for pesticide environmental exposure and food safety. The novel pesticide antibodies are expected to improve the assay sensitivity and stability.”

“Nanobodies are revolutionizing immunoassay development and possibly disease therapy,” explained Shirley Gee, UC Davis collaborator on the proposal. “It was thrilling over the last few months to have Ting and his student here at the same time as Gualberto Gonzalez from Uruguay and his students since we are three of the major labs developing this technology for analyzing environmental and food toxins.”

Among other benefits, the research can aid farm workers, who would be monitored for pesticides in their urine. The assay could distinguish between exposed and unexposed populations and provide useful information about relative exposure related to crop or use of personal protective equipment.

Xu's publications directly address the fact that the immunoassay method, especially ELISA, is an effective screen tool for the agrochemicals and pollutants in the environment. His main contributions to science are associated with design of novel haptens, production of tradition (monoclonal and polyclonal) and engineering antibodies, and development of competitive and non-competitive enzyme-linked immunosorbent assays (ELISA) for small molecules.

Xu received his doctorate in agro-ecology in 2003 from CAU, and did postdoctoral research in immunoassays in 2007 at the University of Hawaii. He joined the CAU faculty in 2003 as a lecturer and advanced to associate professor in 2007, and professor in 2013. Twice honored by Chinese governments, Xu received third prize for the Agriculture Science and Technology Award by the China Ministry of Agriculture in 2009, and second prize for the Technological Invention Award by the China Ministry of Education in 2013. 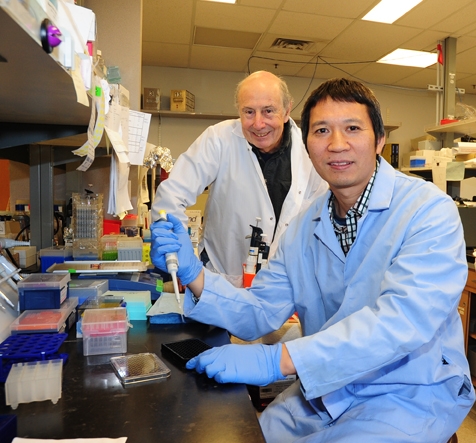