Photo of the rusty-patched bumble bee in Minnesota (2016). Photo by Sarah Foltz Jordan, courtesy of The Xerces Society.
Hear that buzz?

That's the sound of success.

It finally happened. The beleaguered rusty-patched bumble bee, Bombus affinis, is now listed by the U.S. Fish and Wildlife Service as an endangered species, the first bee in the continental United States to be listed under the Endangered Species Act.

So many folks helped spearhead this project. Bumble bee expert Robbin Thorp, distinguished emeritus professor of entomology at the University of California, Davis, and co-author of Bumble Bees of North America: An Identification Guide (Princeton University) helped sound the alarm.

Thorp co-authored a 2010 petition seeking an endangered status for Bombus affinis. The Xerces Society of Invertebrate Conservation, along with Thorp and others, submitted the petition to the U. S. Fish and Wildlife Service in 2013. In 2015, agency officials agreed to consider it. In 2016, they proposed protection. Then on Jan. 10, 2017, the Fish and Wildlife Service listed the rusty-patched bumble bee as an endangered species.  (See Xerces press release.)

Other key players in making this all happen included natural history photographer/filmmaker Clay Bolt and his friends at the Day's Edge Productions, which created the award-winning film, A Ghost in the Making: Searching for the Rusty Patched Bumble Bee with support from the Xerces Society and others. The result: nearly 200,000 persons signed a petition seeking endangered status for the bee.

The rusty-patched bumble bee was once found in 28 states in the eastern and upper midwest United States, along with the District of Columbia and two Canadian provinces. Since the late 1990s, however, its population has declined by nearly 90 percent, according to Sarina Jepsen, director of endangered species for the Xerces Society.

"The rusty patched bumble bee is threatened with extinction," Jepsen wrote in the petition. "Possible causes of its decline include pathogens, habitat loss or degradation, pesticide use, and climate change. Reduced genetic diversity, which could be a result of declining, isolated populations caused by any of the aforementioned factors, likely also threatens this species with extinction. Furthermore, existing regulations are wholly inadequate to protect this species."

Jepsen described bumble bees as "iconic pollinators that contribute to our food security and the healthy functioning of our ecosystems."

Enter Clay Bolt who set out to find, photograph and document the critically imperiled bumble bee. He moved from state to state, habitat to habitat, museum to museum, meeting with scientists and conservationists.  Finally, he found the living breathing rusty-patched bumble bee in the University of Wisconsin arboretum. You can see his excitement and learn about his incredible journey in the amazing Ghost in the Making.

Bolt related that he first became aware of the plight of the rusty-patched bumble bee while looking at specimens in the collection at Great Smoky Mountains National Park. "There was a stuffed passenger pigeon in the same room, frozen in time, but no longer among us in nature," he told us. "It was once the most numerous bird on the planet and then it was no more. This has always haunted me. I decided then that I had to do everything in my power to attempt to bring more attention to this beautiful little bee before it went the same way."

With friends from Day's Edge Productions and the Xerces Society, Bolt made the film about the bee, helped develop the petition, and spoke on Capitol Hill and other high-profile events to spotlight its plight. "Through all of this, I kept thinking back to seeing this amazing little animal in the field," Bolt said. "Watching it fly. Witnessing it do what it had been doing for thousands of years. It had no idea that its fate was in our hands."

"I am just so encouraged and grateful for the public's outcry in support of this species," Bolt said. "This was an effort that would have never been possible without so many people working together to see it through. I am grateful that my images played even a small part in this historic occasion. These are the moments that make all of the hours of work and worry worthwhile."

One observation in Ghost in the Making particularly resonates: "We spend so much time and effort making life better for ourselves, the least we can do is make life possible for this bee." The film advocates that we all do our part:  provide flowers, a safe place to nest, and a pesticide-free environment.

How many other bumble bees should be listed as endangered? "That's difficult to answer, mainly due to a lack of good information," said Thorp.  "Most of our bumble bee species seem to be doing well according to our most recent assessments.  But at least one eastern cuckoo bumble bee may be declining because its host bumble bees have declined.  About a quarter of our bumble bees may be at risk, but we need more information.  One that used to be common here in the Central Valley, Bombus sonorus, basically disappeared from our area about a dozen years ago, but it is doing well in the southern part of its range in southern California and Arizona."

Meanwhile the U.S. Fish and Wildlife Service is reviewing three other species of bees for possible inclusion as endangered. They include Franklin's bumble bee, the western bumble bee and the yellow-banded bumble bee.

Thorp, who has been monitoring Franklin's bumble bee, Bombus franklini, since 1998 (See Dec. 12 Bug Squad), hasn't seen the bumble bee in 10 years within its five-county range of southern Oregon and northern California. He doesn't want to say the "E" word--extinct. Not yet. He thinks this may be the year he'll find it.

This week, however, is a cause for celebration. The rusty-patched bumble bee is now an endangered species, in danger of extinction, and we can now begin the process to protect it and recover it. 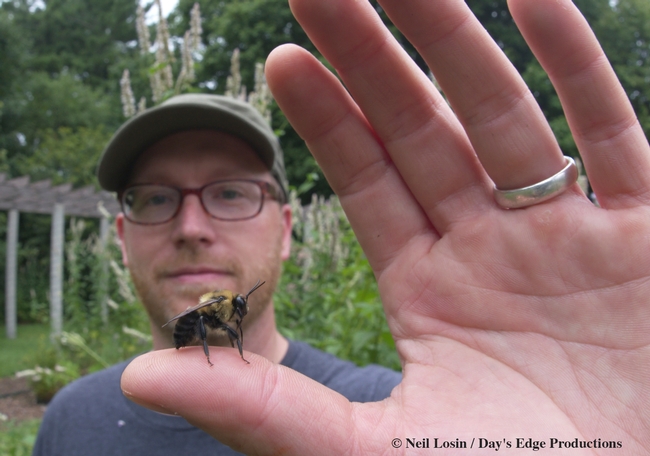 This is a frame from the film, "Ghost in the Making," showing Clay Bolt with the now endangered rusty-patched bumble bee. © Neil Losin / Day's Edge Productions 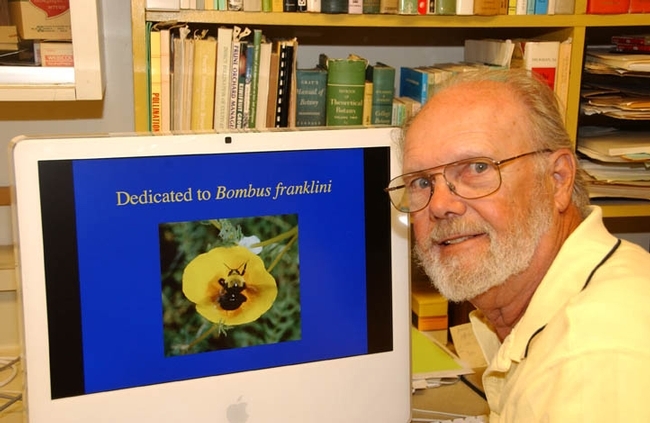