Bug Squad
sitenum=63
Happenings in the insect world
An Unexpected Find But Right on Time: First Cabbage White Butterfy of the Year Art Shapiro, distinguished professor of evolution and ecology at UC Davis, with the winning "first of the year" cabbage white butterfly. (Photo by Kathy Keatley Garvey)
It was an unexpected find, but it was right on time.

Art Shapiro, distinguished professor of evolution and ecology at the University of California, Davis, figured it was too rainy and too cold to head over to West Sacramento to look for the first cabbage white butterfly of the year, so he walked around campus Thursday.

And he found it.

He again won the annual Butterfly-for-a-Beer contest, which he launched in 1972 as part of his long-term studies of butterfly life cycles and climate.

Shapiro, who has been defeated only four times in the contest (and all by UC Davis graduate students) said this was the first find on the campus. A green chrysalis, soon to become a cabbage white butterfly. Professor Art Shapiro rears cabbage white butterflies in his lab at UC Davis. (Photo by Kathy Keatley Garvey)
The 2016 winner was also found in a garden when UC Davis ecology graduate student Jacob Montgomery stepped outside his home in West Davis on Jan. 16 and collected it.

Colleague/collaborator Matthew Forister, McMinn professor of biology at the University of Nevada, Reno (his major professor was Shapiro), said that Shapiro's find was right on time. "You couldn't have hit closer to the trend line if you'd tried," he told him, sending him the illustration below. "This year in red," he pointed out, noting that "the slope has not changed from last year."

The cabbage white was not the only butterfly Shapiro found on Jan. 19. He also noticed a “fresh-looking female West Coast Lady, Vanessa annabella, nectaring at a crucifer in the same garden—first one of those this year too, but it's a hibernator.”

Shapiro launched the "Beer-for-a-Butterfly" contest in 1972 to draw attention to Pieris rapae and its first flight.  “Since 1972, the first flight has varied from Jan. 1 to Feb. 22, averaging about Jan. 20.” The butterfly is emerging earlier and earlier as the regional climate has warmed, said Shapiro, who researches biological responses to climate change. "The cabbage white is now emerging a week or so earlier on average than it did 30 years ago here."

Shapiro teaches his students well. The other winners were his own graduate students: Adam Porter defeated him in 1983; and Sherri Graves and Rick VanBuskirk each won in the late 1990s.

Shapiro maintains a research website on butterflies, where he records the population trends. He and artist Tim Manolis co-authored A Field Guide to Butterflies of the San Francisco Bay and Sacramento Valley Regions, published in 2007 by the University of California Press. 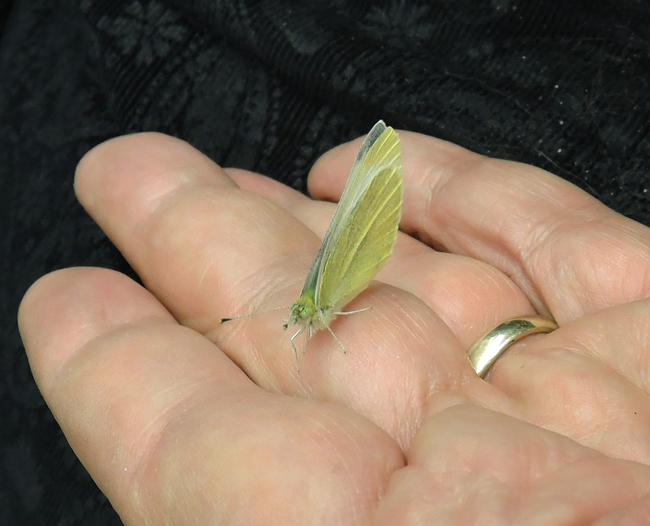 This is the first cabbage white butterfly of the year, found by the contest's sponsor Art Shapiro on the UC Davis campus. (Photo by Kathy Keatley Garvey) 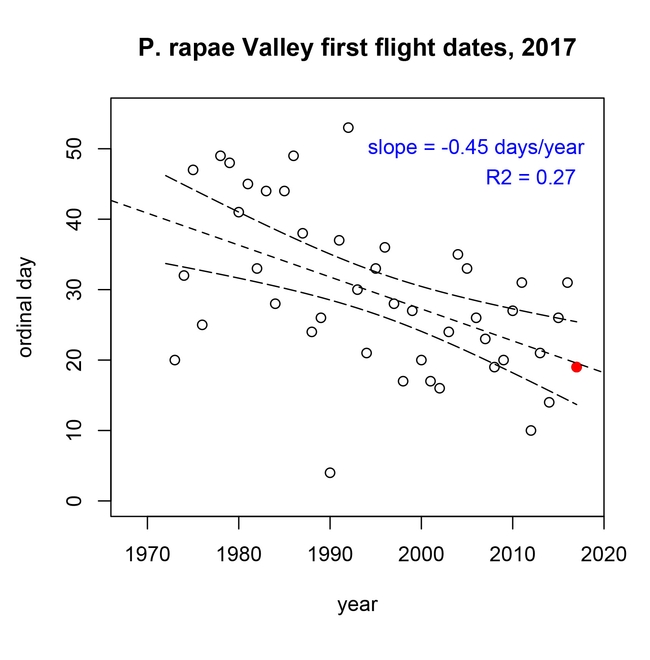 A graph by professor Matthew Forester, University of Nevada, shows that the first cabbage white of 2017 was right on time. 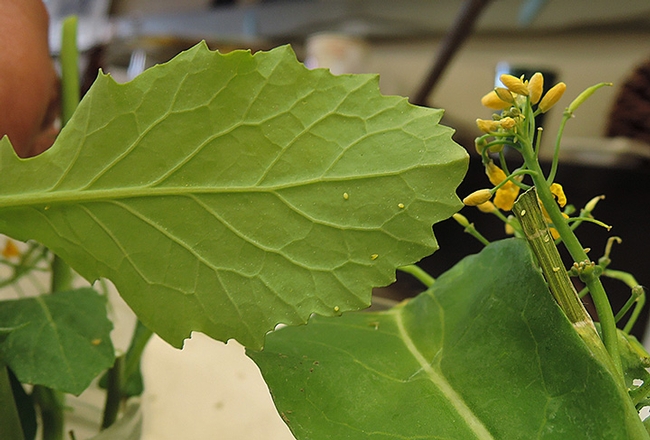