Amina Harris
It's going to be a honey of a festival.

And Amina Harris would love it if you're interested in participating in this event or volunteering.

Harris directs the UC Davis Honey and Pollination Center, Robert Mondavi Institute for Wine and Food Science, which is sponsoring the inaugural California Honey Festival on Saturday, May 6 in downtown Woodland. It's free and open to the public.

The event, from 10 a.m. to 5 p.m. , will stretch four blocks on Main Street and side streets. It promises to be both educational and entertaining. Think honey. Think mead. Think bees. Think beekeeping. Think live music (along with the live bees.) Think fun. A worker bee in the late afternoon sun. (Photo by Kathy Keatley Garvey)
Beekeepers will compete for prizes and bragging rights in the Wildflower Honey Contest (submissions are due March 15). See http://californiahoneyfestival.com/honey-contest/

“The California Honey Festival's mission is to promote honey, honey bees and their products, and beekeeping through this unique educational platform, to the broader public,” said Harris. “The scope of the event includes a culinary stage, a garden stage, a speakers' forum in the Woodland Opera House, kids' zone, live entertainment and loads of vendors and food. In addition, restaurants in Woodland will have honey centric menus and drinks enhanced with honey. Mead anyone? We have a Mead Speakeasy with five meaderies already signed up.”

National sponsors include the National Honey Board, the American Beekeeping Federation.

Margaret Lombard, chief executive officer of the National Honey Board, based in Firestone, Colo., will be among those speaking on the Beekeeper Stage, one of five stages at the festival.

Among the entertainers, as of Feb. 24: Mike Blanchard and the Californios, City of Trees Brass Band, Boca do Rio, Joe Craven and the Sometimers, Jared Johnson, Hannah Mayree, and the Gold Souls.

Education platforms will feature the Honey Flavor and Aroma Wheel, a project of the UC Davis Honey and Pollination Center; a bee demonstration hive; and posters on pollinators (do you know who your pollinators are and where they are?), the life cycle of bees, and bee threats, including pesticides, pests and pathogens.

Vendors will include beekeepers, bee clubs, honey packers, beekeeping supplies, crafts people, food vendors, Harris said. She is seeking volunteers to help with the festival; she may be reached at aharris@ucdavis.edu or (530) 754-9301. In addition, there's still time to fill out a vendor application form; sign up for educational and entertainment activities, and become a (much-loved) sponsor.

Already the festival is shaping up to be "the place to bee" on Saturday, May 6. And the next day--Sunday, May 7--is the third annual UC Davis Bee Symposium at the UC Davis Conference Center. It's about "Keeping Bees Healthy." (See website.) 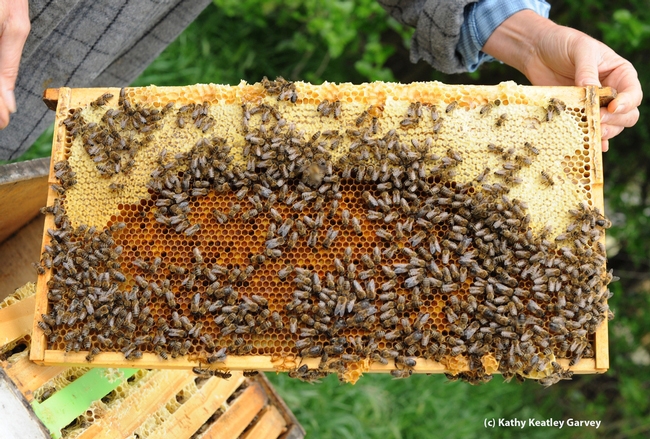