"Well, yes, I would like some aphids for dinner," said every lady beetle (aka ladybug) everywhere.

With the lush green growth of spring, come aphids (the prey) and lady beetles (the predators).

And now, if you look closely, you'll see clusters or rows of lady beetle eggs on your roses.  Luck be a lady...

"The name 'ladybug' was coined by European farmers who prayed to the Virgin Mary when pests began eating their crops," National Geographic says on its website. "After ladybugs came and wiped out the invading insects, the farmers named them 'beetle of Our Lady.' This eventually was shortened to 'lady beetle' and 'ladybug.'"

Globally, we have some 5000 species of lady beetles. Entomologists call them ladybird beetles. Yes,  they're beetles, not bugs. The term, bugs, applies to insects in the order Hemiptera, while lady beetles belong to the order Coleoptera.

Lady beetles range in color from red to orange to yellow, with or without spots. See the UC Statewide Integrated Pest Management Program website for photos and descriptions.

The red and orange are warning colors in nature. Hey, don't eat me. I don't taste good! You'll be sorry! In fact, their hemolymph is both toxic and foul-smelling. Predators steer clear of them.

Although lady beetles don't taste good to predators, aphids are a different matter. Aphids are apparently quite tasty.  One hungry lady beetle can gobble up about 50 to 75 aphids a day or 5000 over a lifetime, scientists say. But who's counting? There's no "Weight Watchers" or "Waist Watchers" program in place.

Today (March 20) marked the first day of spring and the international Day of Happiness, one and the same. Rain pelted our roses, and doused the lady-beetles-that-were-eating-the-aphids, and the aphids-that-were-sucking-the-plant-juices and the roses that were just trying their darndest to grow. 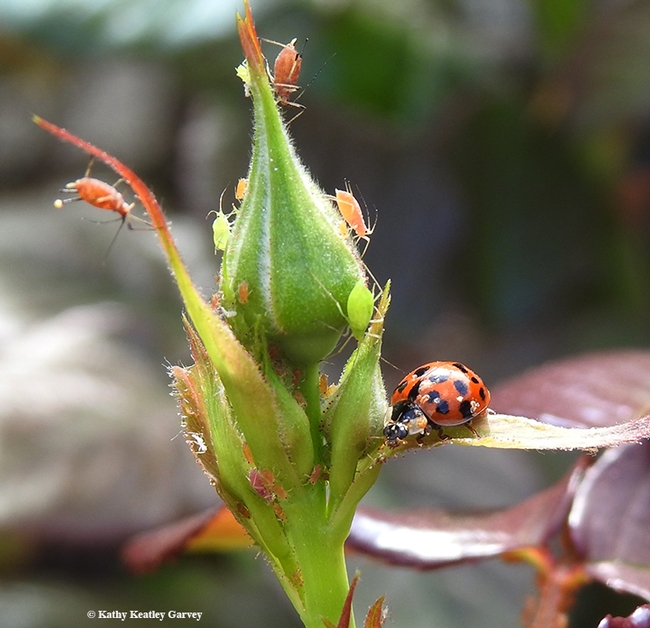 A multicolored Asian lady beetle, Harmonia axyridis, chows down on an aphid while other aphids suck juices from the rosebud. (Photo by Kathy Keatley Garvey) 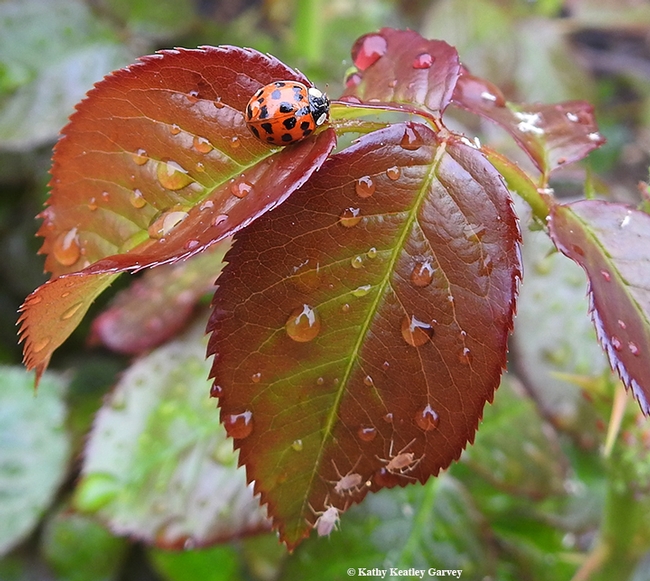 A multicolored Asian lady beetle on a rain-soaked rose leaf on the first day of spring, March 20, in Vacaville, Calif. Note the aphids below the beetle. (Photo by Kathy Keatley Garvey) 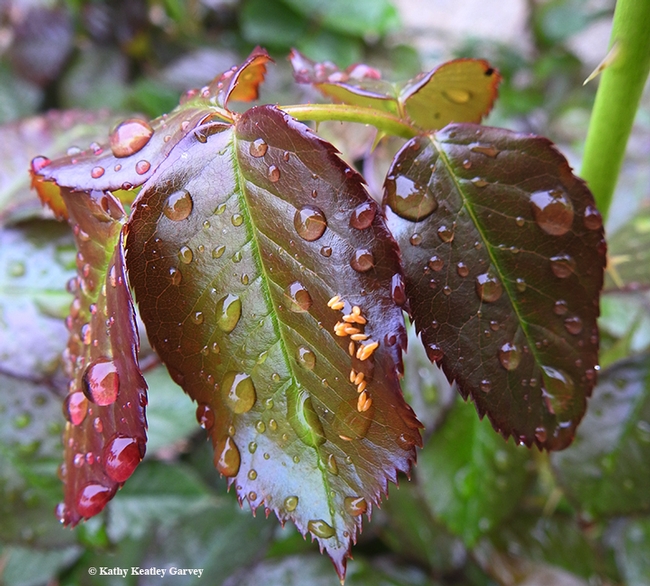