Mary Lou Flint of UC Davis, a longtime leader in the UC Statewide Integrated Pest Management Program and a member of the UC Davis Department of Entomology and Nematology faculty before her retirement in 2014, is the Entomological Society of America's "point person" for the Sacramento March for Science. (Photo by Kathy Keatley Garvey)
A honey bee, dusted with blue pollen, forages on a bird's eye, Gilia tricolor. We tower above her for a bird's eye view. It is April 19, 2010 in a field near the central UC Davis campus.  All is not right in the bee world, no thanks to pests, pesticides, parasites, diseases, malnutrition,  stress and a puzzling phenomenon known as colony collapse disorder.

All is still not right in the bee world. And all is not right with science. Its future is troubling.

That's why it's so important to "March for Science" on Saturday, April 22.  All eyes are focused on the national March for Science in Washington, D.C., and the satellite marches in solidarity.

We're glad to see that the 7000-member Entomological Society of America (ESA), a non-partisan scientific society founded in 1889, is taking an active role by naming its members "point persons" for the various marches.

At the Sacramento March for Science,  UC Extension entomologist emerita Mary Lou Flint of the UC Davis Department of Entomology and Nematology, is ESA's point person.  “It is a really important time to be supporting science and scientists in the United States," she said. "This march is nonpartisan and fully sponsored by the ESA.”

Flint, a UC Davis graduate who holds a doctorate in entomology from UC Berkeley, retired in June 2014 as an Extension entomologist and as a leader in the UC Statewide Integrated Pest Management (UC IPM) Program: she served as the associate director for Urban and Community IPM.

On April 22, she will be there with other scientists, out of their labs, and into the streets. And joining thousands of others, all marching for science. ESA has created a web page to share information on how members can participate in the March for Science in Washington, D.C.,  or at satellite events around the nation and the world.  ESA is also planning a pre-March for Science webinar on April 19 at 2 p.m. (EDT). Speakers from ESA, Lewis-Burke Associates, and the American Association for the Advancement of Science (AAAS) will discuss the logistics of the March for Science, best practices for non-partisan advocacy on behalf of science, and advice for productively engaging with the media during and after the March.

As the Sacramento March for Science web page points out: "Recent policy changes have called science-based information into question. Science is not a partisan issue. Science is fact-based and provides objective results. It is time for people who support scientific research and evidence-based policies to take a public stand and be counted!"

If you live in the Sacramento area, check out these related links, and then join the march to the state capitol: 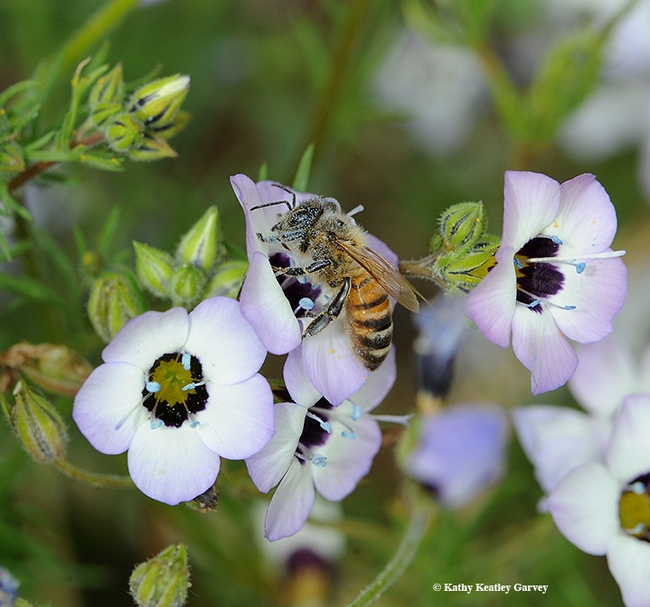 A honey bee, dusted with blue pollen, forages on a bird's eye, Gilia tricolor. This photo was taken in April 2010, when all was not right in the bee world. It still isn't. (Photo by Kathy Keatley Garvey) 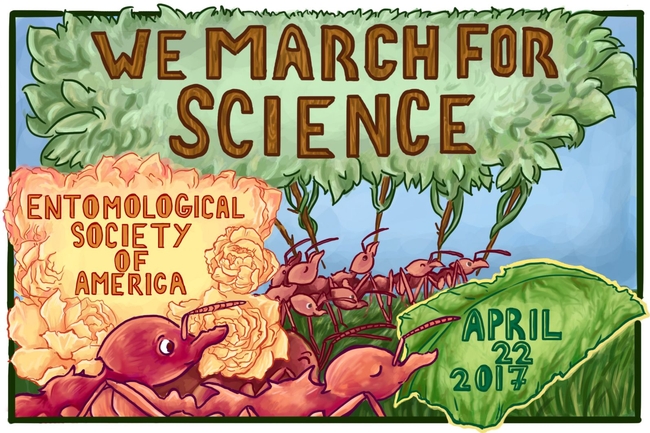