Annual testing of more than 11,000 citrus trees for citrus tristeza virus (CTV) was completed last week at Lindcove REC.  This year we found eleven trees infected with the virus, thus the average infection rate was one per thousand trees.  This phloem-limited virus is vectored by several species of aphid.  Infected trees are removed from the research plots to help protect the research from the disease.  Funding for testing the trees is provided by the California Citrus Nursery Board.

Over the course of four weeks, six temporary field staff sampled four young leaf stalks from each tree under the direction of Therese Kapaun, Staff Research Associate at Lindcove REC.  Stalk ends were cut and pressed directly onto a nitrocellulose membrane, then later processed in-house at the Plant Pathology Lab using a serological DAS-ELISA bioassay.  Blots that were visually positive with this technique were then processed by Therese at a molecular level with RT-PCR, which also allows for virus strain identification.  All infected trees were found to be infected with a common asymptomatic T30 strain, and fortunately were not infected with strains that cause severe symptoms such as stem pitting. Therese was invited to teach the DAS-ELISA technique for CTV at CSU Bakersfield on April 20th.  Plant pathology students brought freshly picked citrus stems from the outdoor courtyard trees, and applied their blots on a shared membrane.  While incubation were in progress, Therese described the disease history of CTV in California, and discussed quarantine regulations and mandatory testing of citrus propagation material, as well as the ongoing work of the Central California Tristeza Eradication Agency and other industry efforts involved in the detection of severe strains of CTV. 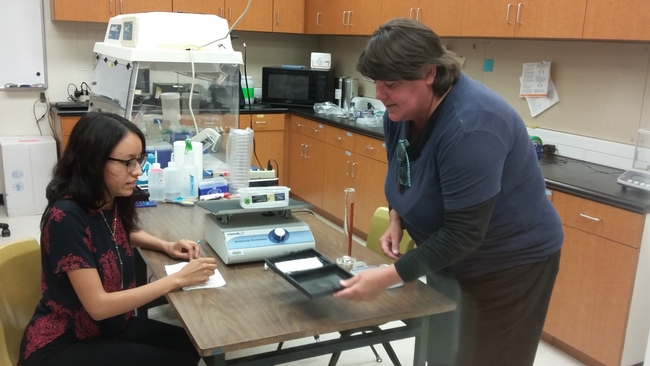