Bug Squad
sitenum=63
Happenings in the insect world
If I Had a Hammer...

The number of new housing developments throughout the country continues to shrink as we struggle with the throes of a deep recession.

That's with human housing, not in a healthy honey bee hive.

The bees are busy building up their colonies, just as they do every spring. Spring officially begins Saturday, March 21, but don't tell that to the bees.

Their rapid build-up is in full swing (unless the colony is suffering from colony collapse disorder and other ailments).

The queen bee is laying eggs, the worker bees (sterile females) are tending the hive and foraging, and the drones (males) are flying out in mid-afternoon to try to mate with a virgin queen.

Watch closely inside the hive and you'll see the queen bee poke her head inside a cell that the worker bees have prepared for her. "The queen bee examines every cell before she lays an egg in it," says Extension apiculturist Eric Mussen, member of the UC Davis Department of Entomology faculty. The workers decide if the colony needs more workers, drones or more queen bees and build cells accordingly.

The paperwork alone would weigh down thousands of honey bees and send them spinning.

Interesting that when humans are born, they go through a long learning process. When bees emerge from their cells, they're genetically programmed and know just what to do.

And they do it.

Without EIRs and building permits. 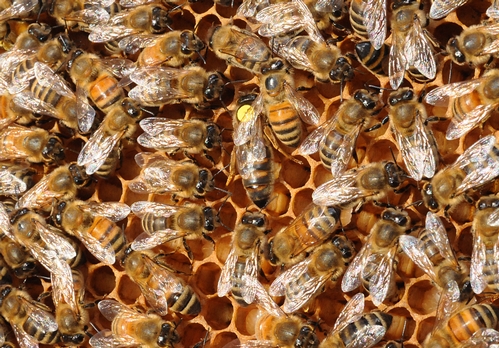 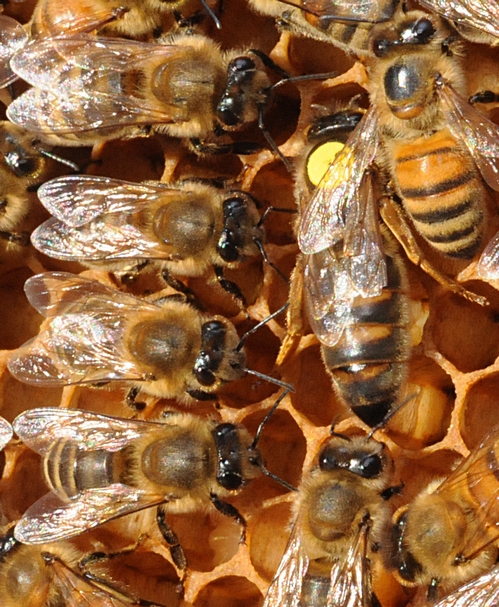 Line-Up
WORKER BEES are lined up in perfect formation as they tend to the queen bee. (Photo by Kathy Keatley Garvey) 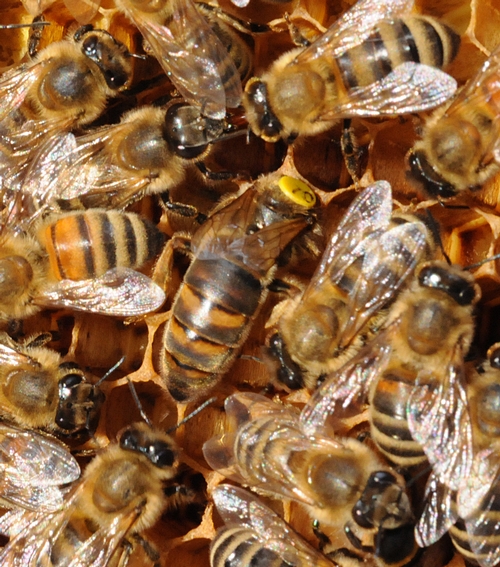